Rami Malek in 'Bohemian Rhapsody'; Mr. Rogers from 'Won't You Be My Neighbor?'; Melissa McCarthy in 'Can You Ever Forgive Me?'
Getty Images; 20th Century Fox (2)
By Stephanie Zacharek

Every year, there’s someone around to say, “This seemed like a bad year for movies,” to which I invariably say, “I think it’s been a great year for movies!” This has been going on for decades now, so the problem—if you want to consider it one—is clearly with me. What stuns me each year isn’t how many bad movies get made, but how many good ones do.

Naturally, there’s a broad middle ground of mediocrity. And if the filmmaking landscape has changed considerably over the past 20 years, it has changed radically in roughly the past five, as television has stolen so much of filmmaking’s glory. If I had a nickel for every acquaintance who has told me, “There’s so much great writing on television! So much more than in the movies!” I would never need another nickel again. Another popular phrase, “I’ll watch [movie x] at home when it shows up on [streaming service x]” would further enhance my kingdom of nickels. A third argument—“It’s so expensive to go to the movies”—is, sadly, extremely defensible, so in that instance I have made it my policy not to accept any nickels.

There’s also “I like watching stuff at home, where there are no annoying people to bother me,” which, on my darkest days, I admit is a compelling argument. But even though I have watched my share of movies on television—as so many people do while growing up—my dirty little secret is that I love leaving the house. I don’t like being around people who look at their cell phones in the movies (you know who you are), but I love being with a group of people all sharing the same experience, even if we’re not necessarily having the same experience. I like being in the presence of images that are much bigger than I am, particularly faces. In the movies, you have humanity right next to you (presumably not using a cell phone), and humanity in front of you, so outsized and vivid as to sometimes be overwhelming. I go to the movies not to be impressed, but to be overwhelmed.

So here is a list of 10 movies that didn’t impress me so much as they brought me an exquisite and sometimes formidable kind of joy. It is, I acknowledge, a sign of the times that my top movie of the year, Alfonso Cuaron’s Roma, will soon be viewable on Netflix, which means people don’t have to trek to a theater to watch it. That’s a good thing, in that more people will see it. But only a relatively small number will enjoy its intense, delicate visual beauty on the big screen when it gets a limited theatrical run.

Either way, Roma and every other film on this list—as well as your own particular favorites, whatever they may be—was clearly made with the goal of making you feel part of something bigger than yourself. Big screen and fellow humans optional—but recommended.

In Paddington 2, a talking bear in a blue duffle coat, voiced by Ben Whishaw, tries to buy a present for his 100-year-old aunt and wrongfully ends up in prison. While there, he delights the inmates with his innovative marmalade sandwich–making technique: even scary-tough institutional cook Knuckles McGinty, played by Brendan Gleeson, approves. Sweet without being squishy, this sequel is even more delightful than its wholly captivating predecessor, both directed by Paul King. Its generosity is ­invigorating—and we can all use a little more of that to spread around.

It took forever for the thing to get made. Its director was fired during filming. (He had previously also been accused of sexual assault, which he denied.) Then the bad reviews poured in, focusing on the movie’s wooden dialogue and paint-by-­numbers storytelling. But Bohemian Rhapsody, starring Rami Malek as Queen lead singer Freddie Mercury, has a luxuriant, potent energy that movies of “higher quality” rarely pull off. It may be a bit of a mess, but it’s a glorious one, a polychrome anthem about what it means to live for love and sex, rock ’n’ roll and beauty—the very opposite of sticking to an agenda.

8. If Beale Street Could Talk

In Barry Jenkins’ gorgeously crafted adaptation of James Baldwin’s piercing novel, KiKi Layne and Stephan James play young lovers­—and expectant ­parents—torn apart by a false accusation. The picture works on multiple levels: it’s a beautiful movie about young people and a sharp indictment of a criminal-­justice system that’s anything but just. Regina King gives a superb supporting performance as a mother who can’t bear to see her child, and the man she loves, suffer; through sun and shadow she bears witness to the couple’s devotion.

Who knew that the last thing we thought we needed—a remake of a film that’s already been remade plenty of times—was exactly the thing we wanted? Director Bradley Cooper set out to reimagine this potentially threadbare story for the modern age, casting himself as close-to-washed-up country singer Jackson and putting Lady Gaga in the role of Ally, an unassuming but unassailably gifted singer-­songwriter who becomes a superstar. The result is a cathartic melodrama that feels both fresh and comfortingly classic. “Maybe it’s time to let the old ways die,” Cooper sings in one of the songs from the movie’s soundtrack. But he also knows what’s worth preserving.

6. Can You Ever Forgive Me?

Sometime in the 1980s, biographer Lee Israel’s livelihood dried up. Out of desperation, she turned to forging and selling letters by famous literary figures, making a mint until she got caught. From this true story, director Marielle Heller has made a terrific movie about romantic loneliness, prickly friendships and career stagnation­: it’s more entertaining than you’d think, but it also cuts close to the bone for anyone who’s ever had to make an emergency U-turn professionally. Melissa McCarthy plays Israel, a woman who has been slapped with that euphemistic label ­difficult and who also happens to be gay. Her partner in crime is a dashing rake played by Richard E. Grant. Together they pull off a grand, if highly illegal, scheme—and they hold each other up even as everyone else leaves them to fall.

This lush, sly reimagining of events in the life of Britain’s Queen Anne, directed by Yorgos Lanthimos, is sometimes a comedy and sometimes a drama, like a gemstone whose color changes depending on the light. Olivia Colman stars as the bored, unhappy Queen who lives for the affection of her closest friend and companion (Rachel Weisz)—until a scheming minx (Emma Stone) arrives at court. Allegiances are forged, broken and reforged in this dry-­witted but ultimately moving film, which hits the sweet spot between acidity and tenderness.

I watched Bo Burnham’s debut film, Eighth Grade—in which newcomer Elsie Fisher gives a splendid performance as a girl making the leap from middle school to high school—with my heart in my throat. What terrible thing was going to happen? What great trauma would befall her at this vulnerable age? But there’s no disaster of that sort in Eighth Grade; this lovely young woman to be just has to get through one of the most ego-deflating stages of life, and that’s hard enough. Burnham’s film—perceptive, affectionate, unsentimental— hits every note just right.

Sometimes a film wears its anguish like fingerprints on a mirror. In Paul Schrader’s First Reformed, Ethan Hawke gives one of the year’s finest performances as a rural pastor who has lost his way, further hastening his own end with drink. A young woman from his congregation— played by a soulful Amanda Seyfried— reaches out when she fears that her husband, a radical environmental activist, may be planning a suicide mission. Politics, religion, the global-warming crisis—all the things we’re either constantly talking about at our dinner tables or are afraid to talk about—come into play under Schrader’s watchful eye. This is one of the most thoughtful, intense and ultimately fortifying films of the year.

Sometimes it feels like everything is awful and nothing will ever get better. Yet Morgan Neville’s lyrical documentary about the quietest television superstar ever, Fred Rogers, of the long-running (and beloved) Mister Rogers’ Neighborhood, suggests that kindness is the single most powerful way forward—and it’s a resource available to all of us. Using vintage footage and interviews with people whose lives Rogers touched, Neville gets close to the mystery of what made this genuinely lovely man tick. It’s sad that we no longer have Rogers, who died in 2003—but how lucky we were to have him at all.

Alfonso Cuarón has built a career making beautiful films, but Roma, his tribute to one of the women who raised him—played, with simmering warmth, by newcomer Yalitza Aparicio—is his most gorgeous and moving. This is a deeply personal film for Cuarón, but its embrace is universal: in telling his own story, he gets us thinking about the latticework of people who made each of us what we are. Roma is an ode to the power of memory, as intimate as a whisper and as vital as the roar of the sea. 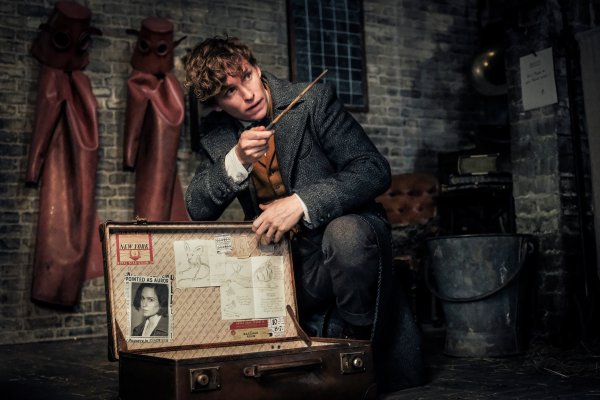 11 Behind-the-Scenes Secrets From the Fantastic Beasts: The Crimes of Grindelwald Set
Next Up: Editor's Pick