Many of the Trump administration’s most controversial immigration policies have taken aim at the most vulnerable class of migrants: asylum seekers.

President Trump’s family separation policy was designed in part to target moms, dads, and children seeking asylum in the country, while former Attorney General Jeff Sessions’ June opinion specifically made it more difficult for victims of gang and domestic violence to legally apply for protection here. In October, the president ordered troops to the border to stave off a “caravan” of roughly 5,000 migrants, many of whom are likely asylum seekers, traveling by foot toward the southern border. And in early November, the administration announced yet another new and highly controversial rule barring all migrants from seeking asylum for 90 days unless they enter the U.S. through an official port of entry.

All of these policies have come to fruition at a time when the total number of asylum requests have skyrocketed, nearly doubling in the last two years alone. In fiscal year 2008, fewer than 5,000 people passed the first step in the asylum process at the U.S. border. By the end of fiscal year 2018, that number had reached 91,786, marking a nearly 2000% increase. The spike is largely due to upticks in family units and minors traveling alone across the border.

The president and his supporters argue that the reason for this rapid increase is that migrants have discovered “loopholes” in the asylum process and promise to crackdown on the influx. But many migrant advocates say the increase in asylum seekers is the result of a confluence of world events—environmental devastation, gang activity and political volatility in much of Central America—and that the Trump administration’s hardline interventions are immoral, costly, and counterproductive.

At the center of this legal and political war all are the migrants themselves who, regardless of whether or not they get status in the U.S., are left to navigate an increasingly complex and ever-changing immigration system. Here are the basics of how the asylum process works.

What is an Asylum Seeker?

Like refugees, those seeking asylum are migrants who cannot or will not return to their country of origin out of fear that they will be persecuted based on their race, nationality, religion, or membership in a social or political group.

While refugees obtain permission to come to the U.S. while living abroad, asylees obtain humanitarian protection while they are physically present in the U.S. (Once asylum seekers’ cases are approved, they are granted what’s known as “refugee status” in the U.S.)

How did Asylum Become a Thing?

The U.S. first adopted an official policy with regard to refugees in the aftermath of World War II when Congress passed the Displaced Persons Act of 1948. The U.S. resettled some 350,000 European refugees under that law, which expired in 1952. In the decade that followed, the U.S. signed the United Nations 1967 Protocol Relating to the Status of Refugees, which expanded basic legal protections for refugees. The definition of a refugee included in that protocol would later inform U.S. policy.

Policies regarding refugees were hodgepodge until the U.S. Congress passed the Refugee Act of 1980 that, among other things, created a comprehensive and statutory basis for claiming asylum in the U.S. It is thanks to that law that migrants who are physically present in the U.S. or at a port of entry have a legal right to to apply for asylum.

How Does the Process Work?

There are two ways to obtain asylum, affirmatively or defensively. Migrants who apply for asylum affirmatively submit a form to the U.S. Citizenship and Immigration Services within one year of arriving in the U.S., either at the U.S. border or from within the country. Those who apply defensively do so after they’ve been arrested and placed in expedited removal proceedings.

In both cases, migrants are interviewed by a specialized U.S. official who determines whether they have a “credible fear” of returning to their home country. Most migrants pass this initial screening. In fiscal year 2018, around 89% of migrants in expedited removal proceedings passed a credible fear interview.

What Happens to Asylum Seekers While They Wait?

Due to a yawning backlog in the immigration court system, asylum seekers’ court dates are often months down the road. Trump and his supporters have said migrants should be held in detention until they get their day in court, but federal protocols and rules governing how long kids can be held in detention limit their options.

Due to shortages in family detention space, family units are often released from custody to await their court proceedings. The president has derided this process as “catch-and-release.” There are alternatives to detaining for families that have proven to be effective, but the White House ended one such program in 2017.

What Happens When an Asylum Seeker Gets Status?

Receiving refugee status is no easy feat. During fiscal year 2018, for example, of the 34,000 immigration cases that were completed or closed some 71% ended with an order of removal. Of the 20,563 credible fear cases where a migrant filed for asylum, the protection was granted in only 5,639, according to federal data.

If asylum protection is granted, an asylee obtains the right to work in the U.S. and may be able to apply for some social benefits, according to the Migration Policy Institute. After a year of living in the U.S., asylees can also adjust their status to become legal permanent residents.

If an asylum seeker’s case is denied—which they most often are—applicants have a right to appeal. Those who don’t, or those who lose their appeal, are ordered deported. Thousands of would-be asylum seekers, who pass the initial credible fear interview, either never officially apply for asylum or fail to show up at their immigration court hearings. Some percentage of that population continues to live in the U.S. with undocumented status. 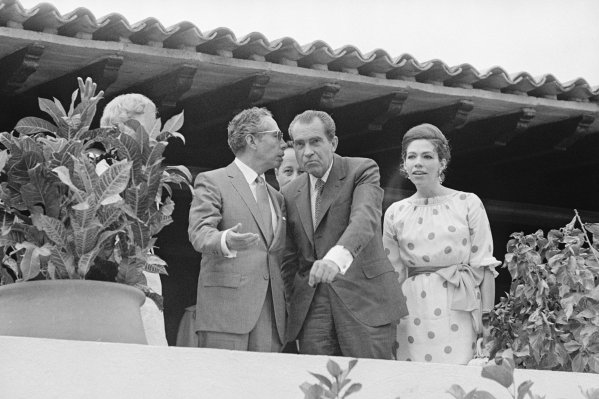 The Militarization of the U.S.-Mexico Border Is Not a New Idea
Next Up: Editor's Pick