Looming in the background of all of these contests, however, is the remaining leadership contest, which isn’t expected to take place until after Thanksgiving: The race for the Speaker’s gavel in the House of Representatives, which Democrats will control for the first time in nearly a decade.

Schumer was quick to tout the cohesiveness of Senate Democrats at a press conference after leadership elections. “That unity has been our strength, and it will continue to be as strong as ever in the 116th Congress,” he said. But that unity doesn’t necessarily apply to the lower chamber of Congress.

In the House, a group of Democratic lawmakers are determined to ensure Minority Leader Nancy Pelosi doesn’t become Speaker in January. Pelosi has announced her intention to run, and no one has stepped up to challenge her. She will only need the votes of a majority of House Democrats when elections are held this month, but will need 218 votes on the floor in January to actually be elected House Speaker.

Her opponents, eager for new leadership, are arguing she does not have enough support to pass a full House vote. (Pelosi and her two top deputies, Reps. Steny Hoyer and James Clyburn, are all in their 70s. Hoyer, who is running for Majority Whip, has circulated a letter with the number of necessary signatures he needs from members in order to prevail).

“I’m just one of the number of people who heard the message of voters loud and clear this year that they want change,” said Rep. Kathleen Rice, who is among the nine current lawmakers openly opposing Pelosi’s candidacy. Rice said she feels the same way about Hoyer and Clyburn. “This is not an age thing. It’s not a gender thing. It’s not a where you come [from] geographic thing. It’s not a racial thing. It’s, this leadership needs to turn the reins over to the next generation of Democrats. The American people demand it – thats what they want, thats how they voted, and we need to listen to them.”

While frustration at upward mobility is a widespread gripe among House Democrats, and even some of Pelosi’s supporters acknowledge there is not a deep bench to replace her, no one else is yet running for House Speaker. The Democrats who oppose Pelosi have said they plan to circulate a letter with the number of necessary signatures showing she doesn’t have the votes to be Speaker, but they have not done so yet. Rice said they have the requisite signatures, but did not provide a date for releasing the letter. Meanwhile, Pelosi is continuing to project confidence — even as she calls incoming lawmakers and touts the multitude of endorsements from various colleagues and outside groups.

Some fresh faces in Republican leadership

While the faces of Democratic Senate leadership remained largely the same, Republicans saw a shake-up due to term limits and retirements.

Lawmakers elected to new positions include South Dakota Sen. John Thune, who will replace Texas Sen. John Cornyn as Majority Whip (that position is term-limited) and Iowa Sen. Joni Ernst, who, as Republican Conference Vice-Chair, is the first woman to serve in her party’s elected leadership since 2010. Iowa Sen. Chuck Grassley will replace Utah Sen. Orrin Hatch as the Senate’s President Pro Tempore, a position that typically goes to the most senior lawmaker and puts him in the line of presidential succession.

Louisiana Rep. Steve Scalise, who was shot last year during practice for the annual Congressional baseball game, will remain McCarthy’s top deputy as Minority Whip, and Liz Cheney will be the conference chairwoman, a position her father, former Vice President Dick Cheney, held three decades ago.

With the spectacle of a divided Congress imminent, McConnell heralded his party’s increased majority in the Senate, but reiterated that he would try and find common ground with the Democrats. Schumer, meanwhile, vowed to relentlessly pressure the Republican majority to ensure the bills his party will pass in the lower chamber on issues like voting rights become law.

What’s next for the lame-duck Congress

With these races done, lawmakers will now focus on the biggest agenda for the lame duck Congress: federal funding.

Current funding for several government agencies – including Homeland Security – expires on Dec. 7, setting up an almost inevitable showdown over funding for the border wall. Schumer reiterated on Wednesday that the $1.6 billion Congress allotted earlier this year is sufficient, but McCarthy is calling for $5 billion, and it’s a sure bet House Republicans will use their final month in the majority to push for as much of that as they can. The Russia investigation also plays into this conundrum; Schumer has said that if acting Attorney General Matt Whitaker doesn’t recuse himself from oversight of the investigation, they will push to include a bill protecting Special Counsel Robert Mueller. McConnell said that such legislation is unnecessary because he doesn’t think Mueller’s probe is in danger. (Outgoing Arizona Sen. Jeff Flake attempted to bring such a bill to the floor Wednesday, but McConnell objected). However, Republicans need Democrats to sign onto the spending bill for it to pass, giving the minority some leverage if they adhere to the unity Schumer touted.

Despite all these factors, McConnell seemed adamant the deadline wouldn’t result in a shutdown. “We’re not going to do that,” he told reporters when asked about the prospect. 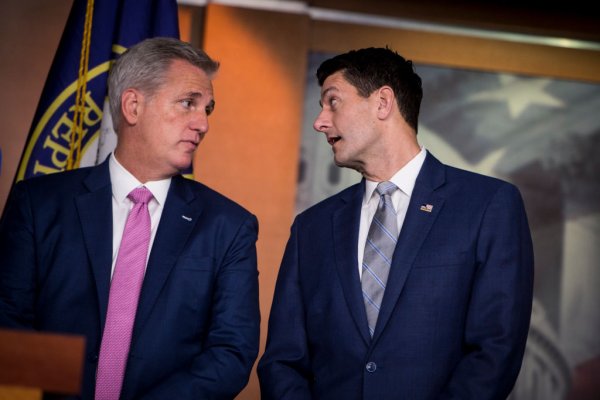 House Republicans Are Facing a Brain Drain of Legislative Leaders
Next Up: Editor's Pick