Former First Lady Michelle Obama is opening up about why so many people seem to be interested in her close cross-party bond with former President George W. Bush.

Bush Hager began the discussion by telling Obama that her father is on a first-name basis with the former first lady.

“I got a text from my dad this morning that said, ‘Send Michelle my love.’ I was like, ‘Don’t you call her Mrs. Obama?’ He’s like, ‘No, I call her…Michelle,’ and I thought, you know, it’s so interesting how people are so interested in y’all’s friendship. I mean that hug was, like, the hug that went around the world. I do love that picture,” Bush said.

“That’s your dad…you know your dad. You know?” Obama responded.

In September 2016, cameras captured Obama and the former Republican president sharing a warm embrace at the dedication of the National Museum of American History and Culture.

“Because I think the political discourse, the way it’s shown in the media, is…all the nasty parts of it. You know? Because I guess we’ve become a culture where the nasty sells. So people are just gonna keep feeding that. We’re all Americans. We all care about our family and our kids, and we’re trying’ to get ahead. And that’s how I feel about your father. You know? He’s a beautiful, funny, kind, sweet man.”

Obama went on to say that she and Bush have not let their political differences get in the way of their relationship.

“And I don’t know that I agree with him on everything. But the truth is much more complicated and complex than that. And I’d love if we as a country could get back to the place where we didn’t demonize people who disagreed with us. Because that’s essentially the difference between Republicans and Democrats.”

The friendship was also on full display at John McCain’s funeral, when viewers caught a sweet mint exchange. 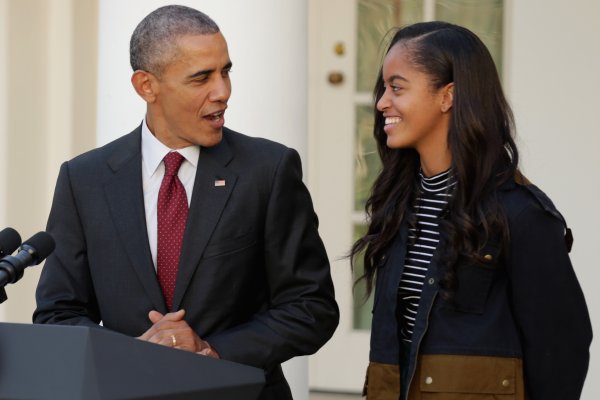 Malia Obama Asked Her Parents to 'Just Be Cool' at Prom
Next Up: Editor's Pick