Wildfires Are Getting More Frequent and More Destructive. There Are No Easy Ways to Prevent Them

In mid-October, as high winds and warm weather struck the Sierra Nevada foothills in Northern California lights went off for some 60,000 Californians. Schools shuttered and businesses went dark.

At fault was the specter of dangerous wildfires. To be clear, no wildfire burned in the immediate vicinity. Instead, the local utility company preemptively shut off power, fearing that high winds could lead to a collision between highly flammable dead trees and a power line, sparking a deadly fire.

The procedure — called de-energizing power lines — is a new feature across the state, and it’s not the only measure being employed to halt wildfires that would have seemed extreme not long ago. In California, like much of the world, climate change is no longer a scientific possibility to avoid but a harsh reality that’s reshaping elements of society now.

“The climate is changing and we’re seeing it firsthand here in California,” says Kurt Henke, former Sacramento fire chief who now heads AP Triton, a fire consulting firm. “We have switched from a reactive standpoint to a proactive approach.”

A whole slew of changes are included in that proactive approach. Firefighters now position themselves before any wildfire starts when they know weather conditions will increase the odds of a blaze. Cities are rethinking their zoning procedures and building codes, requiring homes to use materials made to withstand flames while some new subdivisions have been halted altogether. And individuals are making their own decisions about the level of risk they want to take living on the so-called wildland urban interface that dominates so much of the state’s landscape.

Other methods of preventing wildfires have been around much longer and continue to capture attention. Officials work hard to manage forests, removing dead plants that serve as tinder and lighting controlled burns to allow woodlands to burn under the watchful eye of fire officials rather than run wild. Many who deny the science of climate change — like President Donald Trump — blame wildfires on poor forest management. “There is no reason for these massive, deadly and costly forest fires in California except that forest management is so poor,” Trump wrote on Twitter.

And indeed it has in California. Even with a slew of adaptive measures wildfires continue to burn. Between Nov. 8 and 13, the Camp Fire in California’s Sierra Nevada Foothills had burned some 125,000 acres, reducing towns like Paradise to rubbles. The inferno quickly became the most destructive in the state’s history after destroying more than 7,000 buildings and leaving more than 40 dead. Just outside of Los Angeles, the Woolsey Fire burned nearly 100,000 acres this month and destroyed more than 400 buildings.

Wildfires in California are nothing new, but the frequency of these severe events has sounded the alarm for many state officials. Nine of the state’s 20 most destructive fires have occurred since 2015, following a severe drought that killed trees, leaving behind highly flammable material. And of course global warming promises to exacerbate the problem. “Things like this will be part of our future,” California Gov. Jerry Brown said at a Nov. 11 press conference. “Things like this, and worse.”

That’s why California’s pre-emptive changes — dramatic as they may be — represent only the tip of the iceberg when considering the adaptation needed to prepare for climate change. Brown, who has made halting global warming a top focus of his final term at the helm of the Golden State, called for “hundreds of billions” to be spent on adaptation efforts in the coming years. The state has studied a slew of plans along those lines from how to move electric utility infrastructure to avoid rising sea levels to how to manage the effects of drought on water supply.

Adapting communities to a warming world often receives less attention from the scientists, advocates and policymakers who think about climate change than methods to reduce greenhouse gas emissions. It makes sense: the more we slow emissions the less we need to adapt. But with temperature rise already passing the 1°C threshold as a result of human activity and showing little signs of slowing meaningfully, the question of adjusting for impacts will only become more urgent.

“It is unfortunately totally clear that such events will likely increase with unabated climate change,” says Kirsten Thonicke, a wildfire expert at the Potsdam Institute for Climate Impact Research. “This is and will be a completely new challenge.” 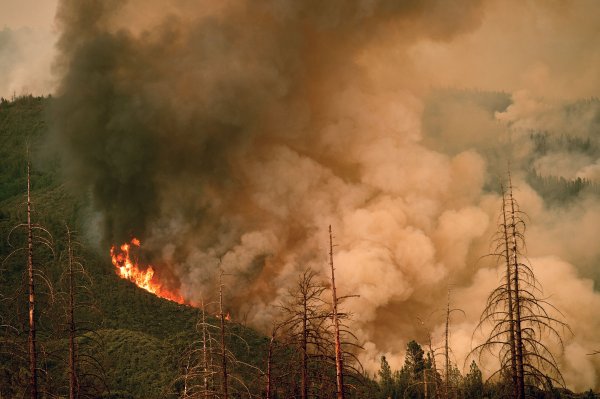 How Some Environmentalists Hope to Make Climate Change an Issue in the Midterms
Next Up: Editor's Pick