Police Have Arrested the Ross From Friends Lookalike After Much Hilarity

British police searching for a man bearing a striking resemblance to Ross Geller from Friends say they have made an arrest.

Officers in Lancashire, England, announced on Twitter that a 36-year-old suspect had been taken into custody in west London on suspicion of theft.

In October, Lancashire Police released footage of the celebrity lookalike as he made off with a crate of beer, appealing to the public for help.

Police in Scotland even warned the public not to approach the suspect.

After getting wind of the story, actor David Schwimmer, who played Ross for 10 years, was quick to get in on the act, posting a video that proved he was abroad at the time of the theft.

“Officers, I swear it wasn’t me. As you can see, I was in New York. To the hardworking Blackpool Police, good luck with the investigation,” he said in a tweet.

And the fun didn’t stop there. Local police were quick to reply. With a tweet of their own, they thanked the sitcom star “for being there for us,” – a rather oblique reference to the lyrics of the Friends theme song.

Lancashire police announced Monday’s arrest on Twitter, thanking Schwimmer and the London Metropolitan Police for their support. Of the more than 50,000 comments left beneath the original Facebook post, not one contained information that helped with the arrest. 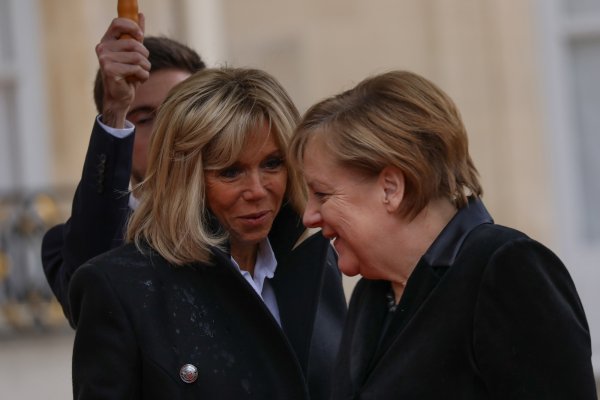 Woman Made the Honest Mistake of Thinking Angela Merkel Was Emmanuel Macron's Wife
Next Up: Editor's Pick