In an unprecedented effort to combat hate speech, Facebook will open its doors to French regulators to review how the company monitors racist, sexist or hateful content, Reuters reports.

Starting in January, Facebook will welcome a small team of civil servants from Macron’s administration to shadow Facebook’s checks on hate-fueled content. According to Reuters, the team may be drawn from the telecoms regulator and the interior and justice ministries. If the six-month trial embed proves successful, Macron hopes to expand the arrangement to other giants like Amazon, Apple and Google.

In May, Macron organized a summit in Paris for the world’s biggest tech executives, including Facebook’s Mark Zuckerberg, to discuss ways to work towards regulation and a “common good.”

“We are grateful to the French Government for its leadership on this co-regulatory approach and look forward to working together over the next months,” said Nick Clegg, head of Facebook’s global affairs, according to NBC News. “The best way to ensure that any regulation is smart and works for people is by governments, regulators and businesses working together to learn from each other and explore ideas.”

Facebook’s community standards typically forbid content that promotes or glorifies violence, discriminates on the basis of gender or ethnicity, or that depicts child nudity or sexual violence. But the Menlo Park company has in the past year come under fire around the world for serving as a platform to enflame hate speech and incite real world violence.

While Facebook has recently stepped up efforts to combat online hate speech and currently employs at least 7,500 content moderators, the race to stamp out deleterious posts is an unrelenting one. Between Jan. 1 and March 31, the social network said it had taken action on around 2.5 million posts, images, videos and other kinds of content.

U.S. lawmakers have called out Facebook, but have largely shied away from moves to legislate online hate spawning across social platforms. By contrast, France has pushed ahead with calls for regulation.

At the same forum on Monday, Macron urged nations to sign on to a global declaration to regulate cyberspace, Reuters reports. Many European countries have voiced their support, but China and Russia have not. 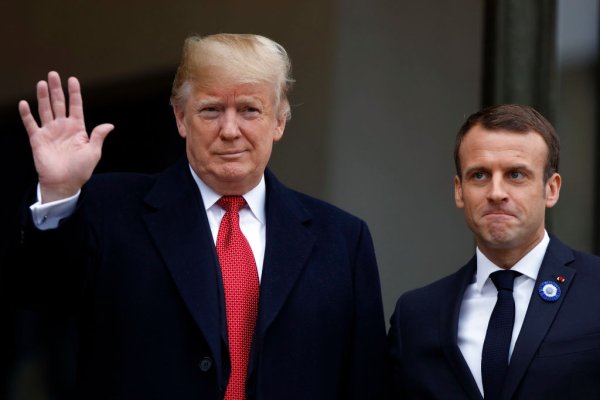 The French President Wants to Defy Nationalism by Creating a Europe-Wide Army. That's One Battle He's Likely to Lose
Next Up: Editor's Pick