As Pakistan roils with fury over the dismissal of a Christian woman’s blasphemy conviction, Canadian Prime Minister Justin Trudeau said his government was in talks with Islamabad about potentially granting asylum to Asia Bibi, who was recently freed, Agence France-Presse reports.

“We are in discussions with the Pakistani government,” Trudeau said in an interview with AFP. “There is a delicate domestic context that we respect which is why I don’t want to say any more about that, but I will remind people Canada is a welcoming country.”

Bibi, a mother of five who is believed to now be in her 50’s, has been blocked from leaving the country amid a wave of protests over her acquittal. She spent eight years on death row for allegedly blaspheming the Prophet Muhammad—a charge that carries the death penalty in the Muslim-majority nation. Last month, Pakistan’s Supreme Court overturned her conviction. The decision sparked widespread unrest, especially among hard-line Islamic protesters.

According to the BBC, Bibi’s husband has requested asylum in the U.K., U.S. or Canada, saying the family is in danger. The Netherlands offered temporary asylum to Bibi’s lawyer, Saiful Malook, after he faced death threats.

Allegations against Bibi emerged from an incident in 2009. While she was working in the fields, she allegedly cursed Muhammad after a fight broke out over a water bowl. Bibi denies the charges, but was initially convicted in 2010.

Bibi is currently hiding at an undisclosed “safe place.” 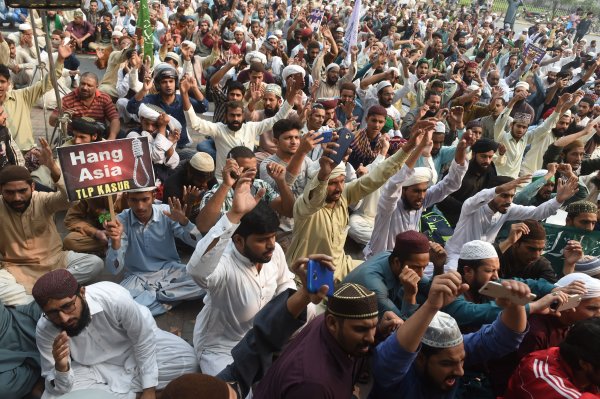 Pakistan Paralyzed by Protests Over Blasphemy Acquittal
Next Up: Editor's Pick