Advocates for overseas voters harshly criticized President Donald Trump for arguing that some mail-in ballots shouldn’t be counted as he spread a conspiracy theory about Florida’s elections on Monday.

In a tweet on Monday, Trump called for the state to stop counting ballots and stick with the results from Election Night, a move that while circumventing state law would also disenfranchise members of the military and civilians overseas, whose ballots can arrive until Nov. 16 and still be counted.

“These overseas and military voters, the worst thing for them is to hear our country’s leaders saying don’t count these votes,” said Susan Dzieduszycka-Suinat, president and CEO of the U.S. Vote Foundation, a nonprofit that helps overseas voters cast their ballots. “They go to incredible lengths to send their ballots back.”

The tweet came as part of a recent series of attacks by the President on Florida’s ballot counting and re-counting process, including claims made without evidence that Democrats are trying to steal the election.

The state’s own election monitors have said there is no evidence of fraud and the Florida Department of Law Enforcement said on Friday it had received no reports of illegal activity despite comments from prominent Republicans. A circuit court judge on Monday told lawyers for both sides to cool things down.

“I am urging, because of the highly public nature of this case, to ramp down the rhetoric,” Judge Jack Tuter said. “Everything the lawyers are saying out in front of the elections office is beamed all over the country. We need to be careful what we say. These words mean things these days, as everybody in the room knows.”

But Trump argued that narrow leads by Republican Senate candidate Rick Scott and Republican gubernatorial candidate Ron DeSantis should be frozen in place, saying that “an honest vote count is no longer possible” and that ballots are “massively infected.”

“Must go with Election Night!” he tweeted.

This is not the first time that mail-in ballots have contributed to irritation among both parties about ballot counting, though elections experts say Trump’s attacks on the integrity of the democratic process are unprecedented for the commander-in-chief.

Here’s what you need to know about mail-in ballots.

Which states allow voting by mail?

All states will allow certain voters to cast their ballot on an absentee basis, but in 20 states voters must provide an excuse to receive a ballot in the mail. In 27 states and the District of Columbia, any registered voter can cast an absentee ballot with no excuse.

Three states — Colorado, Oregon and Washington — automatically mail a ballot to every voter.

Members of the U.S. military, their families and other U.S. citizens living overseas can also vote by mail thanks to the Uniformed and Overseas Citizens Absentee Voting Act. States are required to send ballots to these voters at least 45 days before a federal election.

When did mail-in voting start?

These states have led the way on mail-in voting, but many Western states now allow voters to cast their ballots by mail or in person for weeks leading up to Election Day. These alternative means of voting have increased significantly over the last 20 years, according to Barry Burden, director of University of Wisconsin-Madison’s Elections Research Center.

“The 2000 election and the meltdown that happened in Florida was also a turning point. A lot of states began to look at their own election laws after that and some of them ended up loosening up their absentee voting requirements or proactively offering early voting centers and other ways of getting ballots before Election Day,” he said.

The pattern continued through the mid 2000s as political campaigns realized they could encourage voters to make use of these new rules to lock in votes ahead of the first Tuesday in November.

“The Obama campaign in particular in ’08 pushed their supporters to get their votes in early,” Burden said. “That actually made voters and election officials aware of some practices that hadn’t been used as much that were available to them.”

Who votes by mail?

While Obama made early voting a focus during his presidential campaign, mail-in voting tends to skew slightly Republican, Burden said.

“In general it skews toward the people who tend to be the most regular voters and those people tend to be older in age, higher in income, more educated and more attached to one of the two parties or one of the campaigns,” he said.

These are also often voters who are committed to their candidate and who don’t think events in the last few weeks of a race are likely to change their mind. In other words, not typically the profile of a young voter.

“Young people are less committed because they haven’t fully determined their views and political beliefs,” says Lonna Atkeson, director of the Center for the Study of Voting, Elections and Democracy at University of New Mexico. “People who are less committed voters vote later.”

Democrats are more likely to vote in person if they vote early, according to Burden. But in the case of Trump’s comments about the 2018 midterm elections, the counties that have been the target of his ire are heavily Democratic counties in Florida and largely urban areas in Arizona, where there are more likely to be Democratic voters.

The other groups that often vote by mail include members of the military and voters who are disabled or have health problems that might make it difficult to leave their homes.

In 2016, there were nearly 33 million absentee votes counted, according to the U.S. Election Assistance Commission. More than 600,000 military and other overseas voters cast ballots in 2016. While there is not much official data on disabled voters, a study from Lisa Schur and Douglas Kruse at Rutgers’ School of Management and Labor Relations found that about 16 million people with disabilities voted in 2016 and about 29% of these voters cast votes by mail.

How long does it take to count mail-in votes?

Mail-in votes can take longer to count than ballots cast in person for a variety of reasons. This starts with the fact that not all votes cast by mail have to arrive on election day.

While the specifics vary by state, many states give military and overseas voters an extra few days to get their ballots in as long as they are postmarked by Election Day. This is often true for other vote-by-mail voters, too.

And even when states do require that all ballots be turned in by Election Day, there can be a rush of ballots sent in on the last day, meaning that election officials have a large volume of votes to count once polls close.

Some states also don’t require that the counting be finished immediately. In Florida, counties had until Saturday to complete their initial tallies. And in California, officials have weeks to count their votes.

Then, many states require that their local elections officials match every signature individually. So if a voter signs the envelope of their absentee ballot, which has to be compared by a human with the signature on file before any counting can occur.

“That’s massively time consuming to open each envelope, find the signature that’s on file, compare it to the one on the envelope, make a determination about whether it matches and then if it does, proceed to put it into the count pile and start the tabulation process,” says Burden.

Burden also notes that the lawsuits filed this cycle in Florida, Georgia and Arizona challenging the states’ procedures for determining whether signatures match can slow things down.

“The real problem with the signature matching is that in states like Florida and Georgia that do a lot of ballots by mail but not entirely ballots by mail, they generally don’t have a good uniform procedures for checking signatures across the counties in a consistent fashion,” Burden said. “That’s not the case in Oregon and Washington, which have been doing voting by mail for a number of years. They’ve developed really good standardized protocols in which all election officials are trained in a consistent legitimate way.”

“But in states where early voting by mail has crept up on them but there’s still lots of traditional voting, the practices tend to be uneven and so voters get treated differently depending on which county they happen live in,” he added.

Have elections been decided by mail-in votes?

There have been plenty of elections where one candidate wins by a very small number of votes, and several high profile contests in recent years saw their margins change due to absentee votes counted after Election Day.

In the 2008 Minnesota U.S. Senate race between Democrat Al Franken and incumbent Republican Norm Coleman, the vote count was incredibly close and required a long recount. The protracted battle meant that Franken was not declared the official winner until months later, and late-counted absentee ballots helped Franken in the end.

In another instance of absentee ballots heightening the drama in a close race, the 2006 U.S. House race for New Mexico’s 1st district between Republican Heather Wilson and Democratic challenger Patricia Madrid came down to less than 900 votes. Absentee votes narrowed the margin considerably in the weeks after the election, and when Wilson ultimately kept her seat, the difference between the two candidates was less than .5%.

Have politicians questioned vote counting before?

Politicians often question vote tabulating when elections are close, according to Atkeson at the University of New Mexico, but she believes the President’s actions are different.

“From a normative perspective it’s really troubling. If you don’t trust Congress that’s one thing,” said Atkeson. “But if you don’t feel that they got there legitimately, that’s the whole integrity of our democratic system.”

If voters stop trusting that their votes are counted accurately, that could have serious implications for future elections. “That’s truly problematic for the long-term health of our democracy,” Atkeson said. 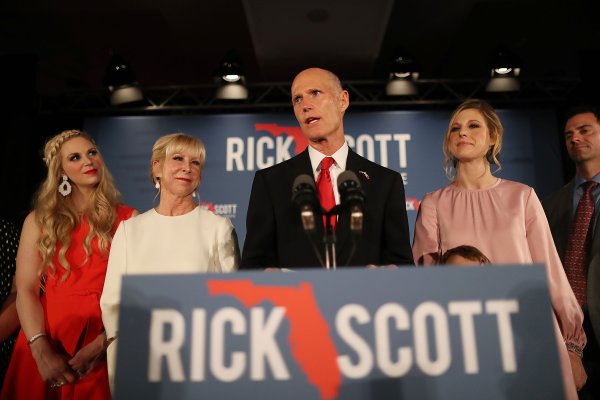 Florida's Ballot Controversy Spells Trouble for 2020
Next Up: Editor's Pick