The votes are still being counted, but it’s clear the 2018 elections featured historic turnout thanks to a president who drove both parties to the polls.

The United States Elections Project estimates that 49.2% of eligible voters cast ballots in the midterms. If that percentage holds after all ballots are accounted for, it would surpass the 48.7% turnout in 1966. For midterm participation rates above that, you’d have to look as far back as 1914.

Michael McDonald, a political science professor at University of Florida who tracks data for the Elections Project, said President Donald Trump was the main reason for the surge.

“In a typical midterm election, where the President’s party is overseeing an economy that is on sound footing, you would not expect high turnout. So clearly, something has changed here in our politics,” McDonald said. “The only logical explanation for the thing that has changed is Donald Trump.”

The total number of votes jumped 30 million from the last midterm election in 2014, when voter turnout was less than 37%. Much of the gain was due to mobilization among Democrats, whose supporters often vote at lower rates in midterm elections than in presidential years. But Republican turnout climbed as well.

“Yes, there was a blue wave, but the red wave from 2010 and 2014 really didn’t dissipate either,” McDonald said. “And so that’s how we get these really close outcomes in some of the states.”

Part of the reason turnout was up Nov. 6 was that Democratic-leaning demographic groups that sometimes skip midterm elections showed up. Exit polls can be flawed, but they suggest Latinos, who lean toward Democrats, made up 11% of House voters in 2018, versus 8% in 2014, according to CNN exit polls, while 35% of respondents were white men (who tend to vote Republican), down slightly from 37% in 2014. Voters without college degrees made up 59% of CNN’s House election respondents in 2018, up from 49% in 2014.

Voter participation rates in midterm elections have historically spiked in the midst of substantial political events. The last two midterms to feature participation rates near or above 50% were 1914, the year World War I began, and 1966, during the Civil Rights movement.

McDonald suggests the spike this year is to due to the presence of the President, even though he wasn’t on the ballot. Trump “inflames passion for and against him,” McDonald said. “What we’re witnessing right now is like similar points in time when we had major upheavals in our politics.”

Michael Cornfield, a political scientist at George Washington University, came to a similar conclusion. “Nothing like a presidential scandal (or multiple scandals) to gin up those seeking a Congressional check on White House power,” Cornfield wrote in an email to TIME. 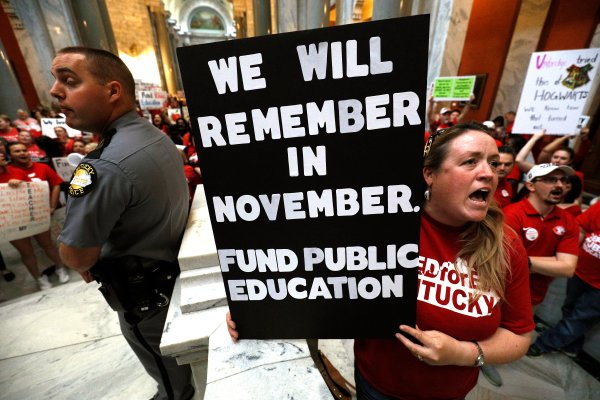 Why Teachers Are Celebrating After the 2018 Midterms
Next Up: Editor's Pick