British Prime Minister Theresa May arrives at the Council of the European Union on the first day of a two day summit on October 20, 2016 in Brussels, Belgium.
Jack Taylor—Getty Images
By Billy Perrigo

Two and a half years after the U.K. voted to leave the European Union, Brits are finding that the decision may have raised far more questions than it answered.

So when British Prime Minister Theresa May’s office finally confirmed on Tuesday that a draft text of the Brexit deal had been agreed with E.U. negotiators, it didn’t calm many nerves. Quite the opposite: even with a possible deal, there is still lots of work to do – and lots of places the agreement could collapse.

In recent weeks, doubts over the progress of talks, and fears over whether a deal could pass Parliament, have resulted in more and more prominent figures calling for a second referendum. Here’s what to know:

Remind me, how did this all begin?

On June 23, 2016, the U.K. voted in a referendum to leave the European Union. The turnout was the highest of any electoral contest in decades: 72.2%. The electorate was split, with 48% voting to remain and 52% voting to leave.

The result wasn’t what the prime minister at the time, David Cameron, had hoped. He wanted to settle the internal divisions in his ruling Conservative Party over the E.U. once and for all by holding a referendum. It backfired massively and when his side lost, he resigned. Theresa May became prime minister.

On March 29, 2017, May triggered Article 50 of the Lisbon Treaty, the untested legal mechanism allowing a country to leave the European Union within a set period of two years. The deadline for the U.K. to leave the E.U. is March 29, 2019.

After triggering Article 50, May called a general election for June 2017 in an attempt to increase her parliamentary majority and strengthen her hand in negotiations with Europe over the departure deal. But May ended up losing seats in Parliament, and was forced to form a minority government. Instead of strengthening her hand, the election weakened it, and has left May in an unstable position – both within the U.K. and with E.U. negotiators.

Not a final one. On Tuesday, May apparently overcame an impasse in Brussels to secure a deal the E.U. could agree with. But while that deal marked an important milestone, the governments of 27 E.U. member states must still ratify it — and the British parliament vote to approve it.

It will be very hard for May to convince skeptical lawmakers in the U.K. parliament to accept the deal. She is under fire from a large “Euroskeptic” wing of her own party, which believes the current trajectory of the negotiations will land Britain in a deal with the E.U. that keeps it subject to many of the same rules and perceived restrictions. On Wednesday, these lawmakers will examine the text of the agreement brought back from Brussels.

If the deal is struck down by lawmakers in Europe or in the UK, Britain faces leaving with a “no deal Brexit” – crashing out of the E.U. in March, leading to trade tariffs, price hikes and possible shortages of food and medicines.

Sounds grim. Is there any alternative?

Some lawmakers say the people should be given a chance to reconsider the Brexit vote in a second referendum. In April 2018, some of these lawmakers joined forces to create the “People’s Vote” campaign. This campaign called for a second Brexit referendum on whether to accept the final deal negotiated by May.

With the clock ticking toward the Brexit deadline, calls for a second referendum to break the impasse have been gaining ground – and publicity.

Who exactly is calling for a second referendum?

Until recently, the act of calling for a second Brexit referendum was limited to a few voices dubbed “Remoaners” by the right-wing British press – a derisive take on those who wish to “remain” in the E.U. But on Oct. 20, some 700,000 people marched through London in support of a “People’s Vote,” a grassroots campaign that was only founded in April.

But when a transport minister in the U.K. government resigned late last week – just the latest official to leave the U.K. government over Brexit – he delivered a parting shot by adding his voice to calls for a second Brexit referendum. “Given that the reality of Brexit has turned out to be so far from what was once promised,” Jo Johnson said in his resignation letter, “the democratic thing to do is to give the public the final say.” The U.K., he said, faced a choice between “chaos” and “vassalage.” Nobody voted for that, he said.

On the other side of the aisle, similar ideas are brewing. On Monday morning, Keir Starmer, the opposition Labour Party’s shadow Brexit secretary, said, “Brexit can be stopped.” Later in the day, former Labour Prime Minister Gordon Brown came out in support of a second referendum. (The current Labour leader, Jeremy Corbyn, disagrees.)

Advocates for a People’s Vote say it offers the U.K. a “democratic way of resolving” a growing “constitutional crisis.” One of its key players is Liberal Democrat leader Vince Cable. “There has been a change in the mood,” he recently told TIME. “There is a general sense that the government has made a mess of the negotiation.”

Following Tuesday’s agreement, May will have to present the text of the deal to U.K. lawmakers. A majority of them must agree to it before it can be implemented.

The problem is, May is running a minority government that is deeply divided over Brexit strategy. She’s under assault from both the anti-E.U. and pro-E.U. wings of her party – both of which could easily vote against the deal. And the opposition Labour Party has said it will likely vote against it, too.

This leaves the distinct possibility of May failing to get the E.U.-negotiated deal through U.K. parliament. If that happens, the U.K. will find itself in an unprecedented position, with no clear way forward. One of the possible solutions to that hypothetical crisis could be a second referendum.

In theory, this would need to happen before March 29, 2019. And it would likely need to secure the direct consent of a majority of lawmakers.

What are the odds of this actually happening?

Oddsmaker Paddy Power currently puts the odds of a second referendum in 2019 at 2/1, a sign that gamblers at least consider it less likely.

And they have good reason. A second referendum is still a deeply divisive idea, opposed by the leadership of the two main parties. May has ruled out a second Brexit referendum, saying it would be a “gross betrayal” of democracy. And Corbyn, the leader of the opposition Labour Party, agrees. He said on Friday that the U.K. “can’t stop Brexit.”

This aversion is driven largely by fears of what it would mean for their popular support, as well as British democracy as a whole.

“If you look at the reasons behind people voting for Brexit, they were about people not trusting politicians,” says Tim Bale, professor of politics at Queen Mary, University of London. “Rerunning the referendum would perhaps risk further inflaming that alienation and turning it into outright anger.”

Tony Travers, a professor at the London School of Economics and Political Science, agrees. “The referendum triggered a bitter culture war, fought out day after day,” he tells TIME. “Against that backdrop, most parliamentarians probably think the original referendum was a mistake and to hold another referendum would be too.”

That’s a common argument against holding another vote. But if lawmakers reject May’s deal, they will in effect be voting for a ‘no deal’ Brexit. Most mainstream lawmakers don’t want that. Some, including Jo Johnson, have suggested a second referendum as a possible way out.

What happens if the U.K. votes to stop Brexit?

That result would bring challenges of its own, though. First, the E.U. would probably have to agree to let that happen. In Article 50, there are no provisions for pausing or altogether stopping the two-year countdown if Britain changes its mind. To do so would require a political decision by European member states.

“Many of the discussions you read in the mainstream British press assume [the political issues surrounding the negotiation] are disagreements within Britain, and the E.U. will agree to anything the U.K. suggests,” Travers says. “This is absolute nonsense.” The E.U. would likely agree to let the U.K. stay, Travers says, but this uncertainty alone may dent hopes for a “People’s Vote.”

Second, the E.U. might impose new penalties on the U.K. “It is possible that they would allow us to stay in the EU, but on what terms?” Bale says. Currently, the U.K. enjoys a budget rebate on its payments to the E.U., receiving millions of dollars back each year. “It might be the case,” Bale says, “our continued membership might not be accepted unless we were to give up many of those advantages. For example the rebate.”

Third, the vote would likely trigger a populist reaction at home. Although polls suggest there would likely be majority support for a vote to remain in the case of another referendum, there’s a large, vocal minority who would still vote to leave. “I suspect that some of them will desert the Conservative party for a populist radical right party,” says Bale.

Whatever happens, says Travers, Brexit is not going anywhere soon. “It’s hard not to see this issue being present in, and potentially dominating, British politics for 10 or 15 years from here.” 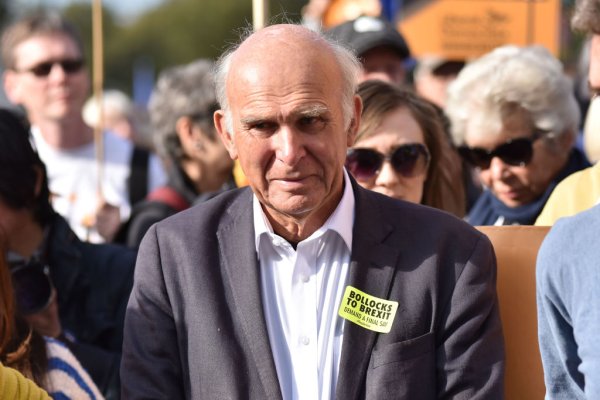 'There Has Been a Change in the Mood.' Britain's Vince Cable Leads the Charge to Reverse Brexit
Next Up: Editor's Pick