Here's How to Help the California Wildfire Victims

Wildfires across California have killed at least 80 people and left nearly 1,000 others missing, officials say.

Northern California’s deadly Camp Fire, which has left at least 77 dead, has become the state’s most destructive wildfire in about a century. The Camp Fire destroyed the town of Paradise, Calif. and grazed surrounding areas of Magalia and Concow earlier in November. The wildfire, about 55% contained as of Saturday, has burned through 148,000 acres. Southern California has faced multiple wildfire, including the Woolsey Fire which killed three people. It was about 82% contained as of Saturday.

A large number of homes and structures have been burnt down by both the Camp and Woolsey Fires. Officials said 9,700 houses and 144 apartment buildings were destroyed by the Camp Fire.

The wildfires have displaced hundreds of thousands of Californians. As search and rescue teams continue to search through the razed acres for those missing, firefighters work to contain the fires in the state.

Trying to find a way to help those who have lost their homes or are in need of temporary assistance? There are a number of charities working to support relief efforts as the fires continue to rage.

Be sure to check each organization’s credibility; fraudsters and scammers are notorious for taking advantage of the charitably-minded during natural disasters. Charity Navigator, an organization that evaluates charities, has a page that includes the names of reputable charities.

Here are four ways you can help California wildfire victims.

How to donate money to California wildfire victims

The Red Cross “is providing both shelter and emotional support for evacuees. You can visit RedCross.org, or text REDCROSS to 90999 to make an automatic $10 donation.”

Direct Relief “is providing N-95 masks, medicine, and other resources to healthcare agencies and first responders in wildfire-affected communities across California.”

The Salvation Army is providing meals in local churches, fairgrounds and a community college to those affected by the wildfires.

The North Valley Community Foundation, a non-profit in Chico, is raising money to help organizations sheltering evacuees of the Camp Fire.

The California Fire Foundation is giving short-term financial assistance to people who have lost their homes in the Camp Fire and Woolsey Fire.

The Enloe Medical Center, which has served several families displaced by the Camp Fire, is seeking donations to help the hospital’s caregivers, patients and families.

How to donate to firefighters battling the California wildfires

The Entertainment Industry Foundation is collecting funds to support firefighters and first responders.

The Butte County Firefighter Benevolent Foundation is raising money on GoFundMe for firefighters in Butte County who have been battling the Camp Fire.

Los Angeles Fire Department Foundation is collecting money on behalf of its firefighters.

Airbnb is encouraging its hosts with homes located near impacted areas to house displaced residents and relief workers for free until Nov. 29. You can sign up to open your home (or find a home to stay in) here.

How to help animals affected by the California wildfires

The Humane Society of Ventura County is accepting animals that have been evacuated and need shelter along with monetary donations.

Select VCA Animal Hospitals in Northern California are offering free boarding assistance to dogs and cats and other animals who have been affected by the Camp Fire.

The North Valley Animal Disaster Group is working to identify and reunite lost animals with their owners and accepting donations. 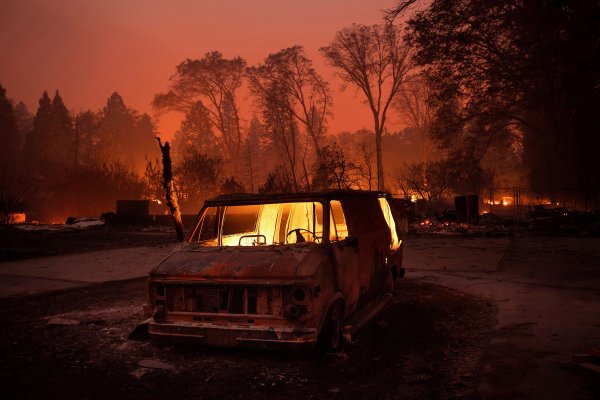 Trump Threatens to Pull Funding Over Wildfires
Next Up: Editor's Pick