John Oliver Says Trump’s E.P.A. 'May as Well Be Run by a Sentient Piece of Coal'

For the penultimate episode of this Last Week Tonight season, John Oliver returned to a favorite topic: Donald Trump, “a man whose presidential library could conceivably exhibit a Razzie Award” thanks to his appearance in the film Ghosts Can’t Do It. In the film, Trump plays a businessman who made a “kissy face” at Bo Derek that Oliver insists is the “single most disgusting thing that has ever been in a movie and [he is] very much including the Human Centipede.”

Oliver wasn’t focusing on Trump’s IMDB entries, though. Rather, he honed in on the two-year anniversary of Trump’s campaign promise to crack down on Washington special interests, also known as his pledge to “drain the swamp.”

According to Oliver, as president Trump has instead done the opposite and put people in power who actively pursue relationships with special interest groups. For example, nearly half of the people Trump has put in the Environmental Protection Agency (E.P.A.) have strong industry ties to the groups they are supposed to be monitoring. Oliver says this is “like handling your city’s waste management program over to a seagull.”

Oliver also pointed to Mick Mulvaney, the head of the Consumer Financial Protection Bureau, who not only reportedly took $60,000 from groups in the payday lending lobby when he was in Congress, but also said on the record that he would be more willing to take a meeting with a lobbyist who gave him money.

According to Oliver, while most people assume governmental officials give preferential treatment to donors, most officials keep it quiet. “It’s weird to hear it out loud,” Oliver said. “It’s like a Disney World park attendant saying, ‘Hey kids, who wants to have their photo taken with a 30-year-old theater major who couldn’t hack it in the industry and who now wears a full body mouse suit?’ There’s no new information there, but it’s still unpleasant to listen to.”

Trump has “in no way drained the swamp,” according to Oliver. “He promised to clean up D.C. and instead the guy in charge of the CFPB is holding hands with loan sharks [and] the E.P.A. may as well be run by a sentient piece of coal.”

In short, if you’re holding out for Trump to drain the swamp, “you can officially kissy face that idea goodbye.” 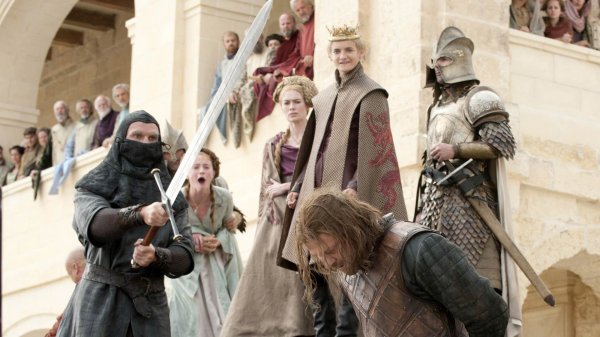 Ned Stark Has a Hunch About Which Remaining Stark He Thinks Will Survive Until the End of Game of Thrones
Next Up: Editor's Pick