German Chancellor Angela Merkel speaks during the opening session of the Paris Peace Forum as part of the international commemoration ceremony for the Centenary of the WWI Armistice on Nov. 11, 2018.
PETER KLAUNZER—EPA-EFE/REX/Shutterstock
By Patrick Donahue / Bloomberg

(Bloomberg) — Angela Merkel offered a bleak take on global affairs on the centennial of the pact that ended World War I.

Adding her voice to French President Emmanuel Macron, who delivered a scathing critique of creeping nationalism to mark Armistice Day, Merkel turned to an event 70 years ago — the establishment of the Universal Declaration of Human Rights.

That document, which has underpinned human rights agreements since 1948, would struggle to see the light of day in 2018, Merkel said at the Paris Peace Forum hosted by Macron and attended by UN Secretary General Antonio Guterres. She lamented a world order weighed down by growing isolationism and open conflicts.

“I ask myself often, imagine we, the international community today, would have to establish such a declaration on human rights. Would we manage that?” the German chancellor asked. “I fear, not.”

It’s Merkel’s latest riff on the cracking foundation of the post-World War II order, especially the deterioration of trans-Atlantic ties under Donald Trump’s presidency. Merkel told a beer-tent rally in Munich last year that alliances that had firmed up for 70 years were “to some extent over.” She made her comments days after Trump used a NATO summit to attack allies for spending too little on defense, and shortly before he withdrew from the Paris climate accord.

Merkel drew applause at the forum — which Trump skipped — for defending the United Nations, which approved the human-rights declaration in the French capital three years after the end of World War II.

“Of course it’s beset by daily routines — they have to do that behind the ideals,” Merkel said of the world body. “But is that a reason to say that we would be better off without the United Nations? I say very clearly no. You can destroy institutions quickly, but rebuilding them is unbelievable difficult.” 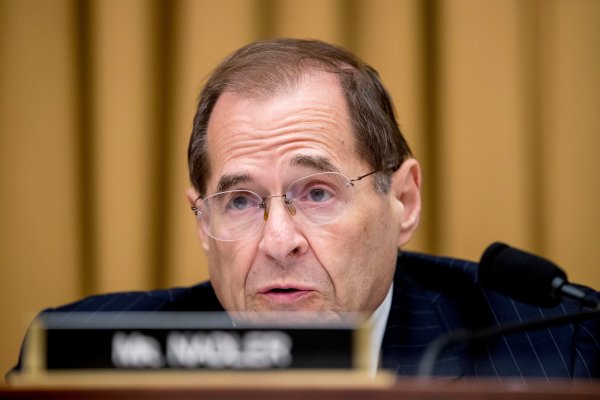 With Control of the House, Democrats Vow Oversight on Trump
Next Up: Editor's Pick