How a Divided Congress Can Actually Get Along

Ideas
By Joe Lieberman
Lieberman, a former U.S. Senator for Connecticut, is national co-chairman of No Labels.

With Democrats winning control of the House of Representatives, the question now is whether the next Congress will prove more or less productive for those of us who want to forge commonsense solutions to America’s big problems. Despite what has swiftly become conventional wisdom that the two parties are destined to be at loggerheads for the next two years, the new arrangement could actually be productive — if both sides take the opportunity before them.

It might help members on both sides to learn a lesson from military strategy. Among the most vexing challenges facing anyone ordering troops into conflict is to know when to press an advantage. In some cases, the prudent move is to use overwhelming power on the enemy — but in others, greater wisdom points those with the upper hand to stand down, or even to seek a truce.

If politics is warfare without violence, then the two parties in Washington have both done a remarkably poor job of navigating the political battlefield during the last decade. Time and again, leaders of both sides have chosen to press every possible short-term advantage, no matter the costs down the road. What if Democrats hadn’t chosen to pass the Affordable Care Act without input and support from the Republicans — or Republicans had sought to pass their tax cuts last year only after seeking input and support from the Democrats? We might be in a very different place today.

There’s no mystery to why Republicans and Democrats have both chosen not to make these better choices — the short-term incentives are raw and powerful. But Washington has become more dysfunctional as each successive indignity has poisoned the Washington well. I hope and believe that the parties have begun to discover that the long-term costs of “going nuclear” may not outweigh the benefits.

I’m not advocating unilateral disarmament. But the question Democrats need to ask themselves is whether using their House gavels and subpoena power to needle or harass the White House without reserve would really serve their policy goals. And what President Trump and his Republican allies in the Senate need to question is whether conservatives would be better served in the long-run if they work with progressives where compromise and progress are possible, rather than just pillorying every idea their adversaries propose and likely failing to pass any of their own legislation.

There are plenty of places where Republicans and Democrats can find common ground. You need look no further than the grand bargains negotiated in the current Congress by the House Problem Solvers Caucus, a bloc evenly split between the two parties that emerged from internal deliberations with bipartisan proposals on health care, infrastructure, gun safety, immigration and border security. This caucus has accomplished what the whole of Congress should do in the normal course of business through regular order.

My proposals here are more easily said than done. Those of us urging bipartisanship rarely have to face the increasingly intense barrage of factors that pull Republicans to the right and Democrats to the left, namely the harping of the parties, interest groups and lobbyists, and the need to raise enormous sums of money for the next campaign. That’s why I believe ordinary citizens have a more prominent role to play in fixing Washington than some will acknowledge.

What if members of Congress could arrive in Washington without the fear that stepping out of line — in other words, working with the other party — could cost them their job? What if they could have confidence that those who supported them at the ballot box would not abandon them if they were revealed to be “colluding” with the other party? Ordinary citizens have the power to reverse the incentives that induce hyper-partisanship. They must exercise that power by speaking out publicly in support of leaders who make tough decisions that may cut against their own political interests, but will serve the country well.

One of the most important untold stories of this year’s election is how many citizens already are, as evident by the legions of moderate Democrats who won House races. Super PACs funded by No Labels’ supporters raised more than $15 million to provide air cover for several current and likely future members of the Problem Solvers Caucus, split between Democrats and Republicans. Twenty-three of those 28 candidates won election, sending an important message to partisans worried that bipartisanship might leave them hung out to dry: it won’t.

Here’s the bottom line. Partisans should be bipartisan because it’s good for the country. But a virtuous cycle of bipartisan cooperation will also end up getting both parties more popular support. The party that stands on the top of the mountain should remember that it may well soon be at the bottom again. Legislators should treat their colleagues accordingly. This might be called the Golden Rule of politics. Our elected officials from the White House to Congress need to lead us in that direction, but we also need to lead them. 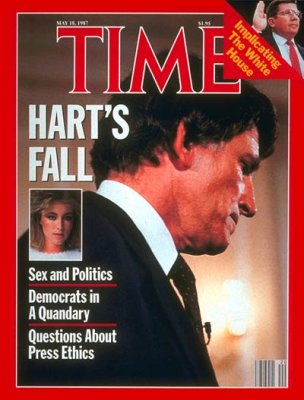 The True Story Behind 'The Front Runner'
Next Up: Editor's Pick