September 1915: A group of nurses at Hamworth Hall in the U.K., which was serving as a Red Cross Hospital during WWI.
Topical Press Agency/Getty Images
By Caroline Todd

Before Florence Nightingale reorganized the care of wounded soldiers during the Crimean War in 1854, it had been the task of camp followers — wives and prostitutes — to treat them with whatever primitive medical help was available. Nightingale insisted that conditions for the wounded were killing men as fast as the enemy. She demanded clean bandages and bedding, fresh air, nourishing food and decent trained care. A few years later and across the world, Clara Barton fought for the same principles in the American Civil War. Both women, and those they inspired to serve, saved countless lives. They attended to the wounded while there was still a chance of treating them, and forever changed how the war-wounded were perceived by the military — no longer as collateral damage in battle, but as lives that could be saved.

And yet, though both are remembered today as heroes, they were often at loggerheads with their governments before they got their way. And even years later, well into the First World War, which came to an end a century ago on Nov. 11, 1918, some officers still felt that women didn’t belong on the battlefield. As I learned while researching a novel with a battlefield nurse protagonist, many women had to prove themselves all over again as competent assets to the army, able to fend for themselves and provide skilled care that returned wounded men to regiments hungry to replace casualties. They were not just a higher class of camp followers.

By 1914, medical care had come a long way. The various combatants approached medical care in different ways. The French were far behind, their mindsets still almost medieval. Some accounts of the cellars and barns and railway cars where the wounded were housed are harrowing. Indeed, decades earlier, they’d decided, as part of a program separating church and state, to prevent nuns, historically the healers in war and peace, from serving with the Army hospitals. A few nuns did work independently of the Army to open hospitals wherever they could. There is also the story of French noblewomen who rushed to sign up for French hospital nursing, only to discover that they must treat the ranks as well as officers. Conversely, the Germans had decent male-only hospitals in their deep, multilayered trenches, so unlike the shallow ones the Allies dug. Even surgery could be done in some of these facilities. Meanwhile, St. Louis sent a unit of nurses and doctors — and an early X-ray machine — to Rouen, long before the U.S. entered the war.

For the British, the declaration of war in 1914 meant that women took over the work of men wherever possible. Postmasters became postmistresses. Women learned to drive omnibuses or to take over desks wherever men could be spared. Others dug up gardens and fallow land to grow needed foodstuffs for the home front, after U-boats attacked convoys coming in from the Empire and the U.S. British farmers were desperate for help. Many women went into factories, and were very good at setting fuses in shells and bullets. It was dangerous work, and the chemicals they dealt with made many ill.

And, on the battlefield, the nurses stepped in. What they would experience over nearly five years of war was horror, privation, exhaustion and danger. Their reward was the satisfaction of saving lives.

For our fictional take on the nurse’s situation, we made protagonist Bess Crawford the daughter of an officer in the British Army, giving her a less Victorian upbringing as well as parents who were more likely to agree that she could train, but it was not uncommon for families to refuse permission, feeling that this would be too shocking.

The women who did volunteer went through several layers of medical training as well. For the Queen Alexandra’s Imperial Military Nursing Service, training was mandatory. There were other volunteer nursing groups, like the VADs (Voluntary Aid Detachments) — with whom Agatha Christie trained — with less strict training, who helped in the wards at secondary nursing tasks.

The regulated nursing groups like the Queen Alexandra’s were given the rank of officer in order to protect them and give them some standing when dealing with doctors, other ranks and high command. These women were expected to uphold the integrity of their service. Their relationships with the men under their care had to be completely professional. They could be expelled if they had affairs or even became engaged. And yet these young women who had never seen a man in his underclothes were expected to work with the mutilated bodies of wounded fresh from the trenches. All of which they did with great courage and dedication, often staying with their patients as the Germans overran a sector. Indeed, the British nurse Edith Cavell not only stayed with her wounded in Belgium, but was accused by the Germans of helping the local underground. She was executed by firing squad on Oct. 12, 1915.

How did a grateful nation reward all those women who had come to its defense? Rather stingily, considering their service and the losses they’d suffered as a generation of fathers, husbands, and sons died for King and Country.

Some women finally gained the vote in 1918 — at war’s end — as promised earlier in the war when the Suffragettes had agreed to halt their civil protests for the duration. But the franchise was only extended to women who were 35, the head of household or the owner of property. The war nurses were not eligible unless they fit into one of these categories. Nor were those who worked on the land or drove the buses or set the fuse in all those shells. Even so, there were men who went on record predicting dire consequences to the nation arising from women being allowed to vote or stand for Parliament, because they were as a sex emotionally unsteady.

Britain didn’t collapse. Still, it was not until 1928 that all women over 21 received the same rights as men, in the Representation of the People (Equal Franchise) Act. American women were granted that right in 1920, in the 19th Amendment.

Less than a hundred years ago… I wonder sometimes how many women today understand what a hard-won right that was. Certainly nursing was a high-profile example of what women could achieve, although their sisters in other positions were the backbone of England’s work force and clearly visible on an almost daily basis. This was repeated in WWII and, in both instances, these women were expected to quietly return home and resume their places as wives and mothers.

After World War I, however, that wasn’t always possible. Britain had lost a generation of men, and many women had to find work to support themselves and their children. At the same time, many employers had to swallow their feelings about hiring women, and fill vacancies where they could. Still, in the hundred years since the Armistice, we have really not made a hundred years of progress in how women are viewed in many workplaces. The nursing profession is thus perhaps the best example of one in which the work of women in the Great War had a proud and lasting impact on the future. Contrary to what some hoped at the time, that war did not end all wars — and in those that followed, nurses carried on the tradition of duty and service begun by Florence Nightingale and so faithfully embodied by the courageous women of World War I.

Caroline Todd writes, along with her son Charles Todd, under the name Charles Todd. Their novels include the forthcoming The Black Ascot and the recent Bess Crawford novel A Forgotten Place. 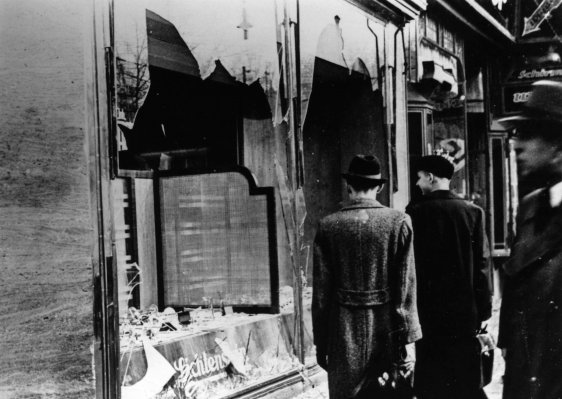 Jewish Germans Had Their Lives Destroyed by Nazis During Kristallnacht. Their Neighbors Let It Happen
Next Up: Editor's Pick