The death toll of the wildfire in Butte County, Calif. climbed to 83 nearly two weeks after the blaze began, bringing the statewide total of wildfire deaths to 86.

Cal Fire announced on Wednesday that two more bodies have been recovered from the land scorched by the Camp Fire, which is 85% contained by firefighters. The blaze has spread 153,336 acres and destroyed over 13,500 residential buildings since it was ignited on the morning of November 8.

The Butte County Sheriff’s office also said that 560 people are unaccounted for, according to the AP. A number of people on the list have been confirmed dead by families and friends on social media, while others have been located but authorities have not marked themselves as safe, the Associated Press reported.

Meanwhile, Cal Fire announced on Wednesday night that the Woolsey Fire, which has consumed 96,949 acres south of Southern California’s Simi Valley, is now 100% contained. The Hill Fire northwest of Los Angeles, which had consumed 4,531 acres, was completely contained by Friday morning, according to Cal Fire.

Stuart Palley for TIMEDr. Jeff Smith listens to the heartbeat of Mika, 8, a German Shepherd enlisted to help search for victims of the Camp Fire, in Paradise, Calif., on Nov. 19. Smith is the veterinarian helping to make sure search dogs stay healthy amid such smoky and dangerous conditions.Cal Fire released a warning on Tuesday that areas impacted by the Woolsey Fire and the Hill Fire could also face flooding and debris flows. Areas impacted by fires are more susceptible to flooding and mudslides. The areas impacted by the fires are likely to receive between .2 inches and .7 inches of rain on Wednesday and Thursday, or as much as 1.25 inches in the foothills.

President Trump visited California on Saturday and met with Governor Jerry Brown and Governor-elect Gavin Newsom. There he said it’s time “to pull together for the people of California.”

Before departing for Northern California, Trump said he would focus on forest management to prevent future fires.

“We will be talking about forest management. I’ve been saying that for a long time. And it could have been a lot different situation,” he said.

What President Trump has said

President Donald Trump approved a major disaster declaration for California on Nov. 12, a move which came just two days after he drew ire for tweeting about the wildfires without mentioning the victims. Instead, he criticized forest management and threatened to withhold federal payments to California.

His comments prompted backlash among firefighters, politicians and celebrities in the fire-besieged state.

On Nov. 13, the president eventually offered his condolences for the lives lost, and thanked the firefighters for their efforts.

On Saturday, President Trump tweeted after his visit to the state that it was “incredible to be with our GREAT HEROES today in California. We will always be with you!”

Where are the California wildfires?

The above wildfire map from the California Department of Forestry and Fire Protection shows fires burning in several parts of the state, including the Camp Fire and the Woolsey Fire.

The map also shows fires burning in the areas north and south of San Francisco and areas surrounding Los Angeles.

How big are the California wildfires?

The Camp Fire in Northern California blazed through over 153,336 acres by Tuesday night. The entire town of Paradise was scorched, leaving smoldering homes and burned-out cars in its wake. Cal Fire officials said that the Camp Fire was 85% contained as of Wednesday night.

The Woolsey Fire in Southern California has now burned though 96,949 acres and is 100% contained as of Wednesday. At least 1,500 structures have been destroyed, and more than 75,000 homes in western Los Angeles and eastern Ventura County were evacuated. Residents were advised to avoid canyon roads and use the Pacific Coast Highway as they evacuated.

What started the wildfires?

A Pacific Gas & Electric Co. electrical transmission line may have started the devastating wildfire in Northern California, the AP reports. Betsy Cowley, who owns 64 acres of land near where the wildfire began, said Nov. 12 that she received an email from the utility the previous week indicating there was an issue with the transmission system on her property. The email said crews needed to come to Cowley’s property because the transmission system was causing sparks, she told the AP.

PG&E said that it encountered a problem on an electrical transmission line near the fire before the flames broke out and spread throughout the area. The problems started within the area of land that Cowley owns in Pulga, Calif. Cowley told the AP that crews were responding to the area because “they were having problems with sparks.”

PG&E shares dropped 17.4% Nov. 12 as the wildfires continued to burn in California.

Southern California Edison, another utility, reported to state utilities regulators that it had an outage on an electrical circuit near where the Woolsey fire began. SoCal Edison said the wildfire was reported at 2:24 p.m. Thursday, about two minutes after the outage on the circuit.

No official cause has been determined for either wildfire.

Where are people being evacuated?

Authorities on Thursday, Nov. 8 issued mandatory evacuation orders in rural areas of Northern California, the AP reports. The 27,000 residents of Paradise, Calif., were ordered to evacuate the area on Nov. 8. Staff and 41 patients at the Adventist Health Feather River Hospital in Paradise were evacuated to other hospitals because it was close to the oncoming wildfire. Highway 70, located near the wildfire, was closed down and the California Highway Patrol asked drivers to avoid the road.

In Southern California, authorities quickly issued evacuation orders as fires erupted near Ventura County. Residents of the Camarillo Springs community and a trailer park were evacuated.

After the Santa Ana winds that had fueled the fires died down Saturday, some evacuated Southern California residents have retuned home, though officials have warned that the danger is not over. Another series of strong winds was expected to hit the area from Sunday to Tuesday.

About 50,000 people were displaced earlier in the week week due to the Camp Fire, according a spokesperson for the Red Cross.

The entire city of Malibu was ordered to evacuate ahead of the Woolsey Fire on Nov. 9. It is home to about 13,000 people, among them some of Hollywood’s biggest stars. According to the Associated Press, Southern California state officials put the total number of people forced from their homes by all active wildfires at about 250,000.

Air quality in San Francisco and areas around it were rated in an unhealthy range, according to the Bay Area Air Quality Management District, which issued a red alert and warned residents to close windows, stay hydrated and stay inside when possible.

“The Bay Area will experience air quality impacts as smoke from the Camp Fire in Butte County, northeast of the Bay Area, moves in to the region,” the alert reads. “Most of the smoke is expected to remain aloft but the public will likely see and smell smoke from the quickly expanding Camp Fire.” 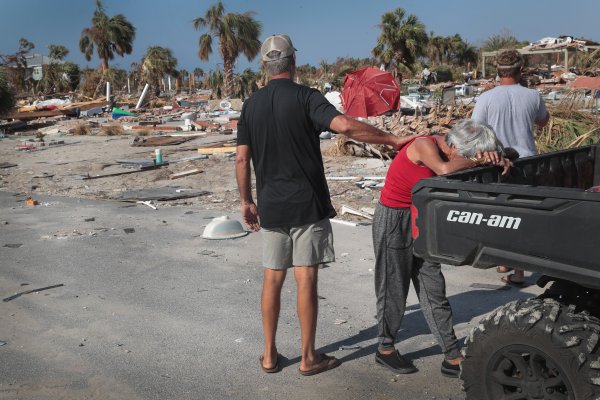