African-American Veterans Hoped Their Service in World War I Would Secure Their Rights at Home. It Didn't

The arrival of the 369th Black infantry regiment in New York after World War I. Undated photograph.
Bettmann/Getty Images
By Chad Williams

Charles Lewis was glad to be home.

One hundred years ago on Nov. 11, a date now commemorated as Veteran’s Day — which will be observed on Monday, Nov. 12, in 2018 — the Great War came to an end. Lewis was one of 380,000 black soldiers who had served in the United States army during the World War. A little over a month later, Lewis, after being discharged from Camp Sherman in Ohio, was back in his small town of Tyler Station, Ky.

On the night of Dec. 15, a police officer stormed into Lewis’ shack, accusing him of robbery. Lewis, wearing his uniform and claiming the rights of a soldier, resisted arrest and fled. He was soon captured and jailed in nearby Hickman, but by challenging white authority a line had been crossed. Local whites were determined to teach Lewis and other black people a lesson.

Around midnight, a mob of approximately 100 masked men stormed the jail. They pulled Lewis out of his cell, tied a rope around his neck and hung him from a nearby tree. As the sun rose the next morning, crowds gathered to view Lewis’ lynched body.

While combat in France may have concluded with the armistice, for African Americans, the war continued. World War I transformed America and, through the demands of patriotism, brought the nation together in unprecedented ways. But these demands also exposed deep tensions and contradictions, most vividly in regard to race. African Americans fought a war within the war, as white supremacy proved to be harder to defeat than the German army was.

Black people emerged from the war bloodied and scarred. Nevertheless, the war marked a turning point in their struggles for freedom and equal rights that would continue throughout the 20th century and into the 21st.

In his April 2, 1917, war declaration address before Congress, President Woodrow Wilson proclaimed, “The world must be made safe for democracy.” With this evocative phrase, Wilson framed the purpose and higher cause of American participation in the war. The United States had no selfish aims and, true to its creed, would fight only to ensure that the principles of democracy become enshrined on a global level.

Black people immediately recognized the hypocrisy of Wilson’s words. On the eve of American entry into the war, democracy was a distant reality for African Americans. Disfranchisement, segregation, debt peonage and racial violence rendered most black people citizens in name only. A. Philip Randolph, a young socialist and editor of the radical black newspaper The Messenger, spoke for many African Americans when he wrote, “We would rather make Georgia safe for the Negro.”

Nevertheless, the majority of African Americans embraced their civic and patriotic duty to support the war effort. Black people had fought heroically in every war since the American Revolution, and they would do so again. By demonstrating their loyalty to the nation as soldiers and civilians, African Americans believed they would be rewarded with greater civil rights.

White supremacy tested the patriotism of African Americans throughout the war. Racial violence worsened, the most horrific example being a massacre that took place in July 1917 in East St. Louis that left over one hundred black people dead and entire neighborhoods reduced to ashes.

Black soldiers also had a trying experience. The army remained rigidly segregated and the War Department relegated the majority of black troops to labor duties. Black combat soldiers fought with dignity, but still had to confront systemic racial discrimination and slander from their fellow white soldiers and officers.

With the armistice, African Americans fully expected that their service and sacrifice would be recognized. They had labored and shed blood for democracy abroad and now expected full democracy at home.

The death of Charles Lewis was the first ominous warning that this would not be the case.

As a New York newspaper wrote after the lynching, “And the point is made that every loyal American negro who has served with the colors may fairly ask: ‘Is this our reward for what we have done?’”

In the months following the armistice, racial tensions across the country increased. Black soldiers returned to their homes eager to resume their lives, but also possessing a deeper appreciation of their social and political rights. Many white Americans, both North and South, worried what this would mean for a tenuous racial status quo that was based on black people remaining subservient and knowing their place.

These fears translated into violence.

Throughout the summer of 1919, race riots erupted across the country, most notably in Washington, D.C., and Chicago. In Elaine, Ark., an effort by black sharecroppers to organize for better wages enraged local whites and led to a massacre that left upwards to 200 African Americans dead. The number of lynchings of black Americans skyrocketed to 76 by the end of the year, with several black veterans, some still in uniform, amongst the victims. The famed author, diplomat and civil rights leader James Weldon Johnson named these bloody months of 1919 the “Red Summer.”

Despite this vicious backlash, African Americans did not surrender. The war had changed African Americans and they remained determined to make democracy in the United States a reality. A generation of “New Negroes,” infused with a stronger racial and political consciousness, would continue the fight for civil rights and lay the groundwork for future generations. They took the words of W. E. B. Du Bois to heart, when he wrote in the May 1919 editorial “Returning Soldiers”:

A century after the armistice, African Americans, whether in the military, the halls of Congress or in local communities, continue to stand on the front lines in the fight to make democracy a reality in the United States. The lessons of World War I remain relevant today, as we still struggle to know the reason why.

Chad Williams is Samuel J. and Augusta Spector Professor of History and African and African American Studies at Brandeis University. 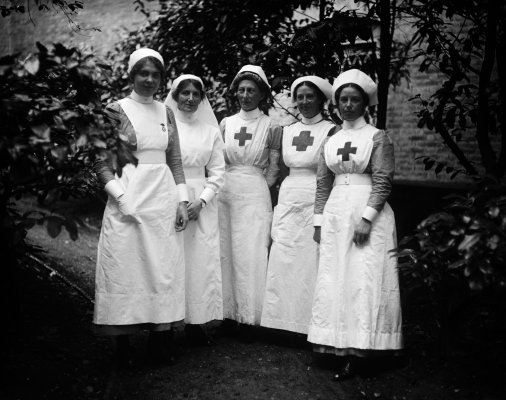 How Nurses in World War I Helped Change Ideas About What Women Could Accomplish
Next Up: Editor's Pick