By George Steer and Katie Reilly

Ginsburg, 85, injured herself Wednesday in her office at the Supreme Court in Washington, D.C., and was taken to George Washington University Hospital for observation and treatment the next morning.

“Justice Ginsburg has been discharged from the hospital. She is doing well and plans to work from home today,” a U.S. Supreme Court spokesperson said in a statement Friday.

Daniel Stiepleman — Ginsburg’s nephew and the scriptwriter for On the Basis of Sex, a new film about the early years of Ginsburg’s career as a lawyer — told Reuters on Thursday that she was “doing great” and had been making jokes.

“The last I heard she was up and working, of course, because what else would she be doing, and cracking jokes,” he said. “I can’t promise they were good jokes but they were jokes.”

Ginsburg is the Supreme Court’s oldest justice, and one of four judges considered to be liberal on the nine-seat court. She has survived two bouts of cancer, and in 2014 underwent a procedure to have a stent placed in her right coronary artery. Were she to stand down due to poor health, it is likely President Donald Trump would replace her with a conservative justice, tipping the balance of the court even further to the right.

“I wish her well. She said something very inappropriate during the campaign, but she apologized for it,” Trump said about Ginsburg’s recovery on Friday, according to a pool report.

“I can’t imagine what this place would be — I can’t imagine what the country would be — with Donald Trump as our president,” Ginsburg had said in an interview with the New York Times in July 2016. “For the country, it could be four years. For the court, it could be — I don’t even want to contemplate that.” She also called Trump a “faker”, and he called for her to resign. Ginsburg later apologized for commenting on a candidate for public office and said her remarks were “ill advised.”

“I wouldn’t say she’s exactly on my side, but I wish her well,” Trump said Friday, according to the pool report. “I hope she gets better and I hope she serves on the Supreme Court for many, many years.”

Upon hearing of Ginsburg’s injuries, anxious liberals took to Twitter to volunteer their own ribs to help with her recovery.

“Where can I donate a rib, or three?” tweeted one Ginsburg fan. “Asking for a Supreme Court justice.”

Ginsburg’s fall meant that she missed the largely ceremonial swearing in of new Justice Brett Kavanaugh, who repeated the judicial oath Thursday in front of Trump and other government officials following a divisive confirmation process, during which he faced multiple allegations of sexual misconduct. 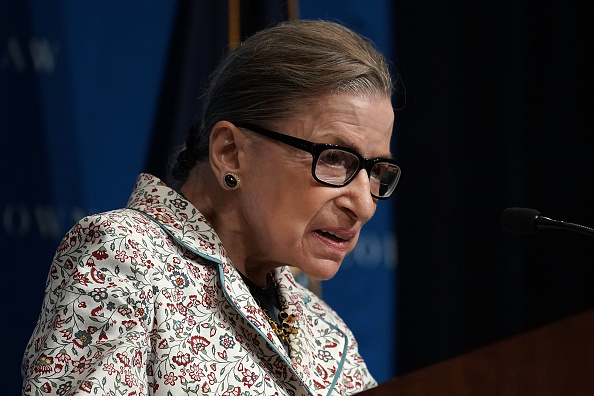 People Promptly Offer Bones of Their Own After Ruth Bader Ginsburg Fractures Her Ribs
Next Up: Editor's Pick