The Trans-Pacific Trade Deal Survives, But the U.S. and China Matter More

After months of delays–and one very public withdrawal–the trans-Pacific trade deal officially has a start date. The rechristened Comprehensive and Progressive Agreement for Trans-Pacific Partnership will come into force on Dec. 30, thanks to a herculean effort by Japan and its Prime Minister Shinzo Abe. On Oct. 31, Australia became the sixth country after Japan, Mexico, Singapore, New Zealand and Canada to ratify the terms of the 11-nation agreement; Chile, Malaysia, Brunei, Peru and Vietnam are now on deck.

The deal sometimes called TPP-11 is on track to become one of the world’s largest-ever trade deals, covering 14% of world GDP and roughly 500 million people. Had the U.S. joined the original version of TPP planned under President Barack Obama’s “pivot” to Asia, it would have been even bigger–governing the trade terms of roughly 40% of the world’s economic output and presenting an undeniable challenge to China’s economic reach. However, President Donald Trump preferred to withdraw the U.S. from the deal when he took office and instead take on Beijing directly, launching a trade war with China that has steadily escalated throughout 2018.

For those committed to free trade, a deal is always better than no deal, especially when it covers a combined $10 trillion of GDP. But while TPP-11 will help lower barriers and improve cooperation among the signatories, it will do very little to check the collateral damage of the current U.S.-China trade war. The U.S. and China remain the world’s two largest economies, and any bilateral tensions between them will inevitably have major knock-on effects on the rest of the global economy. A trans-Pacific trade deal does little to change that reality.

That remains true even if the U.K. signs up to join the trade deal once it has left the E.U. next year; Abe said in October that he would welcome Britain with “open arms.” The added presence of the world’s fifth-largest economy and a major importer would certainly add ballast to TPP-11. But the U.K. has nowhere near the economic heft of the U.S. and would presumably still be suffering from its breakup hangover with its own closest trading partner, the E.U.

Ironically, a country that could provide this deal with that much needed economic weight would be China. China has been quietly toying with the idea of joining the trans-Pacific deal over the long run, having little interest in being left out of consequential economic architecture in Asia. Chinese media reported in October that Beijing was exploring the possibilities of a deal it previously called too complex to consider joining.

It’s hard to see China agreeing to the deal’s current requirements on issues like labor rights and intellectual-property protections. But if TPP-11 begins to deliver on its economic promise, China will not want to miss out and will begin exploring space for compromise. Japan may welcome the possibility of China’s joining up, seeing it as an opportunity to constructively shape Beijing’s approach to global trade norms and rules. And the more countries join–Colombia, Indonesia, Thailand and South Korea have all indicated interest–the more attractive signing up for the new trade deal becomes for China.

But that’s many years down the road, with plenty of thorny negotiations to overcome. And much depends on how the U.S.-China trade war plays out. The forward momentum of TPP-11 is proof that other countries are attempting to hedge. But there’s no real way to reverse the demise of what was once a global free market. 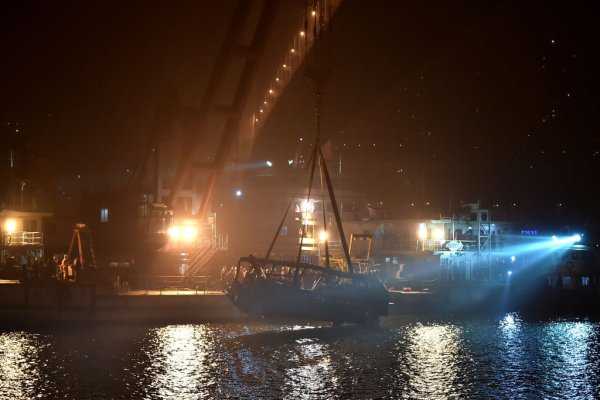 13 Dead After Angry Passenger Causes Bus to Plunge Off 160-Foot Bridge in China
Next Up: Editor's Pick