The centerpiece of My Brilliant Friend, the first of pseudonymous Italian author Elena Ferrante’s four beloved Neapolitan novels, is a New Year’s Eve fireworks display. Narrator Elena “Lenù” Greco and her best friend, Raffaella “Lila” Cerullo, are teens ringing in 1959 at a gathering that has reunited feuding clans in a show of neighborhood solidarity. But a rare moment of wonder in this slum at the edge of Naples devolves into a battle with the local mob family. Lila describes the panic attack that overtakes her that night as an experience of “dissolving margins,” an implosion of her moral universe. Elation gives way to angst as pyrotechnics overload the characters’ senses, culminating in a symbolic end to Lila’s childhood.

Translating a scene this layered into a visual medium couldn’t have been easy for the makers of My Brilliant Friend, the first of four planned miniseries based on Ferrante’s novels, which premieres Nov. 18 on HBO. Yet the scene retains its power onscreen. At first, director Saverio Costanzo keeps a tight focus on the terrace where Lila and Lenù enjoy the fireworks. Then the frame widens and the mobsters come into view. Lila turns sweaty and grim. Lenù watches, helpless. Faces blur into one another. Indeed, margins dissolve.

Costanzo and the show’s impressive executive producers, Italian filmmaker Paolo Sorrentino (The Young Pope) and Hannibal alum Jennifer Schuur, seem to get that the scene is the linchpin of the book. And their fidelity to Ferrante’s vision is matched by their commitment to verisimilitude. In this co-production with Italian public television that was filmed in the Neapolitan dialect, the miniseries’ young actors–cast in an open call–don’t perform their roles so much as inhabit them. Narration highlights Ferrante’s keenest observations. But it is Costanzo’s light hand with Ferrante’s story and motifs that makes this a thrilling adaptation.

Born in the wake of World War II and Italian fascism, in a neighborhood that feels more like a remote island than the satellite of a major city, Lenù (played by Elisa del Genio as a child and Margherita Mazzucco as a teen) and Lila (Ludovica Nasti, then Gaia Girace) meet in first grade. They are opposites: Lenù is a tall, fair “good girl,” while Lila is tiny and dark, with a feral intensity. They’re both smart, but Lila is a self-taught prodigy, and their competition pushes Lenù to excel. Their relationship grows strained when Lenù graduates to middle school but Lila is forced to go to work.

The girls’ perspectives are initially constrained by their block–where women gossip at the windows, men fight in the streets and there are no secrets. In the premiere, Costanzo confines his palate to desaturated earth tones, giving scenes the same grit as Italy’s postwar neorealist films. Color creeps in as Lenù ventures ever farther from home while Lila develops an increasingly sophisticated worldview from within her family’s apartment. As in the fireworks scene, the introduction of vibrant shades doesn’t always signify positive change.

My Brilliant Friend may be the most visible subtitled show ever to air in the U.S.–and though it comes with a built-in audience, it still feels like a risk. While male coming-of-age stories are presumed to be universal, teenage girls are usually treated as a niche concern. In the case of Ferrante, that double standard seems especially unfair.

Greeted in the U.S. as European cousins to tales of female friendship like Girls and Broad City, the novels aren’t as gendered as their pastel covers suggest. Though their fates are shaped by a sexist culture, Lila and Lenù are individuals first. My Brilliant Friend resonates most as a record of the way a person’s world expands between childhood and adolescence. Amid a pop-culture landscape newly obsessed with the experience of the oppressed class that makes up half of the population, this is a rare story that sees its young women for who they are: human beings. 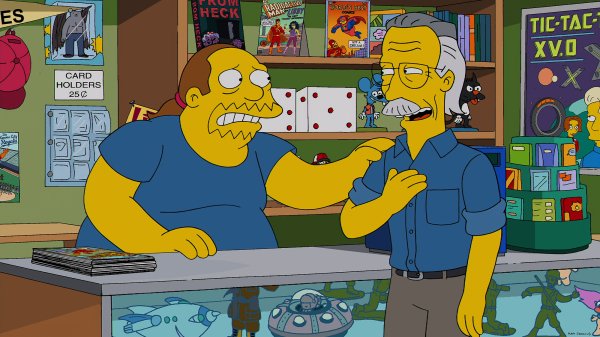 More Than Marvel. Stan Lee 's Guest Appearances on The Simpsons Prove He Was King of the Cameos
Next Up: Editor's Pick