Many High-Stakes Midterm Elections Are Still Too Close to Call. Here’s What You Need to Know

Anticipation over several high-stakes midterm elections across America will carry into the following days—and perhaps weeks—in a handful of states where tight races have gone into overtime.

Some of the most closely watched midterm elections races in Georgia, Florida, Mississippi and Arizona were too close to call as of Wednesday afternoon. Those races could head to a recount or runoff, in which candidates are forced to face each other at the polls again.

The highly contested battles that are still in limbo include the governor’s race in Georgia, where long lines and technical issues on Tuesday marred voting sites in a traditional red state that gained national attention over concerns of voter suppression. In Mississippi, Senate candidates have advanced to a runoff, while U.S. Sen. Bill Nelson, who is seeking re-election in Florida, has called for a recount in his close bid against Florida Gov. Rick Scott.

As election results continue to unfold, here’s what to know about some of the biggest elections with razor-thin margins.

A winner in the gubernatorial race has yet to be determined in Georgia, where more than 3.8 million people cast votes for a governor this midterm election, according to the state’s unofficial results. While thousands of mailed ballots still need to be processed, Democrat Stacey Abrams is currently trailing her opponent, Republican Brian Kemp. Kemp—Georgia’s Secretary of State, who oversees elections, including his own—currently has 50.35 percentage points to Abrams’ 48.7. But experts say the race could head to a runoff if there is no clear victor.

In Georgia, a gubernatorial candidate must receive more than 50% of the vote to win, according to the state’s election laws. Kemp’s current percentage could drop below that threshold if Abrams secures about 15,000 votes from untallied ballots, triggering a runoff, says Abrams’ spokeswoman Lauren Groh-Wargo. Abrams’ campaign said up to 77,000 mail-in ballots, many from heavily Democratic counties, still need to be counted, as well as absentee and provisional ballots. In a conference call with reporters Wednesday morning, Groh-Wargo said counties may certify outcomes by early next week.

A runoff, if one is called, would take place Dec. 4. But aides for Kemp do not foresee that as a possibility. The candidate’s campaign declared victory during a conference call with reporters on Wednesday evening, even though the Associated Press has not yet officially called the race. “The message here is pretty simple,” campaign official Austin Chambers said. “This election is over, and the results are clear.”

Abrams could become the nation’s first black female governor if elected. On Wednesday, she refused to concede, vowing to “fight for every vote.” “Make no mistake,” she wrote in a tweet. “This race is not over.”

It’s also too close to call in two separate congressional races in Georgia. In the 6th District, where Republican Karen Handel is fighting for re-election, the incumbent has 49.55 percentage points while Democrat Lucy McBath has 50.45. In a tweet Wednesday, McBath touted her slight lead but said the two candidates are “locked into a recount.” Over in the 7th District, Republican Rob Woodall and Democrat Carolyn Bourdeaux are also in a near tie. Woodhall has 50.23 percentage points while Bourdeaux has 49.77. A recount could be called in either race if the final vote margin between the contenders is 1% or less, according to the Associated Press. Both campaigns are waiting for absentee ballots to be counted.

Democratic U.S. Sen. Bill Nelson, who is trying to hold onto his Senate seat in Florida, claims the race is headed to a recount as he narrowly trails his rival, Republican Florida Gov. Rick Scott, who has already declared victory. In a news release Wednesday, Nelson said he’s behind by about 34,500 votes out of the 8.1 million total ballots cast. Since that margin is less than a one-half percentage point difference, the candidate says state law requires the votes to be tallied again. “We are proceeding to a recount,” Nelson said in a statement.

Florida’s Secretary of State Ken Detzner oversees elections in the state and is the only one who could officially call for a recount, according to state election laws. In an email Wednesday, his office said Detzner has not yet ordered a recount. But one could be determined as early as Saturday, according to the state’s timeline for election certifications.

Meanwhile, Chris Hartline, a spokesman for Scott’s campaign, criticized Nelson’s attempts to hang onto what he sees as a losing battle. “This race is over,” Hartline said in a statement. “It’s a sad way for Bill Nelson to end his career. He is desperately trying to hold on to something that no longer exists.”

Another showdown between Republican Sen. Cindy Hyde-Smith and Democrat Mike Espy, who are both vying for a Senate seat in Mississippi, will take place on Nov. 27 in a runoff sparked after neither candidate received more than 50 percent of the vote, according to the New York Times. Hyde-Smith, who was endorsed by President Donald Trump, garnered 367,036 votes while Espy received 358,752 votes. In a speech to supporters, Hyde-Smith said the results were easily predicted. “We figured there was going to a runoff,” she said. “I’m here to tell you we’re going to fight like nobody’s business the next three weeks. We’re going to get it done.” Espy also accepted the challenge. “Tie game,” he said in a tweet. “We’re in overtime. 20 days to win.”

Arizona residents will have to wait a little longer to see which candidate will make history as the state’s first female Senator. That title will either go to Democrat Kyrsten Sinema, who got 834,135 votes, or Republican Martha McSally, who received 850,043 votes. According to the Associated Press, hundreds of thousands of ballots still have to be tabulated. It’s unclear how long that process will take. 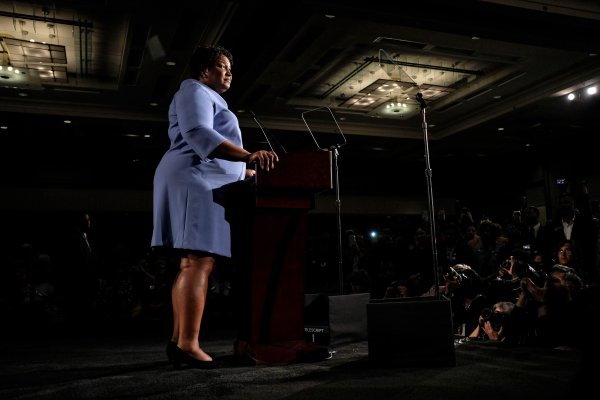 Here's What's Next in the Georgia Governor's Race
Next Up: Editor's Pick