Turn Down for What Now? Trump Is Not Getting Away With Saying 'I Don't Know Who Lil Jon Is'

President Donald Trump is catching flak for saying that he doesn’t know who Lil Jon is despite the fact that the rapper appeared on two seasons of his reality TV show Celebrity Apprentice.

After a reporter questioned Trump on Wednesday about a number of instances in which he was accused of using racist rhetoric, including a Celebrity Apprentice incident involving Lil Jon, the president denied that he even knew who the “Turn Down For What” artist was.

“Michael Cohen recently said you called black voters stupid; Omarosa has accused you of using the ‘N’ word, and the rapper Lil Jon has said you called him ‘Uncle Tom.’ What’s your response?” Trump was asked during a post-election press conference.

In a statement he shared on Twitter in 2016, Lil Jon said that Trump had repeatedly referred to him as “Uncle Tom” during his time on Celebrity Apprentice, but said that he wasn’t sure if Trump had known the term was a racial slur.

“When this ‘Uncle Tom’ incident happened on Celebrity Apprentice in the boardroom several of my cast mates and I addressed Mr. Trump immediately when we heard the comment,” Lil Jon wrote. “I can’t say if he knew what he was actually saying or not, but he did stop using that term once we explained its offensiveness. I also want to be clear that I don’t agree with many of the statements Mr. Trump has said during his current run of President.”

The Internet, of course, was quick to call Trump out for his press conference claim. “I broke the news during the campaign that Trump had repeatedly called Lil Jon ‘Uncle Tom’ during Celebrity Apprentice, so Trump obviously knows who he is lol,” tweeted The Daily Beast reporter Asawin Suebsaeng. 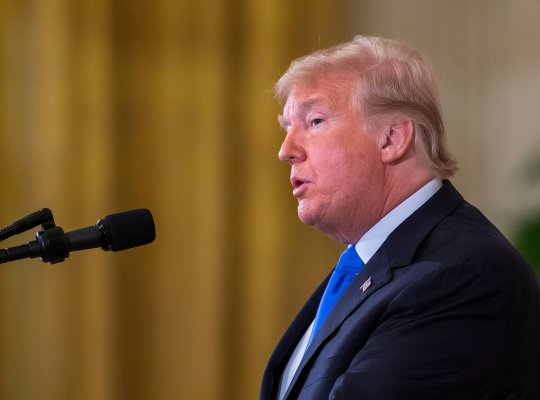 Trump Said 'I Think I Am a Great Moral Leader' and the Internet Took It From There
Next Up: Editor's Pick