Most Teachers Running for Office Lost on Tuesday. Here's Why Educators Are Celebrating the 2018 Midterms Anyway

The teachers who launched historic walkouts in red states last spring failed to transform their state legislatures on Tuesday, and most of the teachers who ran for office, fed up with education cuts, lost at the polls. But educators are still celebrating some major gubernatorial victories and bipartisan signs that the pro-public education movement created by teachers has staying power.

“This history teacher is making history,” Jahana Hayes, the 2016 national Teacher of the Year, said in a victory speech Tuesday night after winning her race for U.S. House in Connecticut’s 5th Congressional District. She will be the first the first black woman to represent the state in Congress.

Democrat Tony Evers, Wisconsin’s Superintendent of Public Instruction and a former teacher, was elected governor in a stunning upset. He defeated Republican Gov. Scott Walker, who gutted teachers unions and dramatically cut education funding after taking office in 201, but then called himself “the pro-education governor” this year. “I realized that if I really wanted to make a difference for these kids in the state, I couldn’t rely on [being Superintendent of Public Instruction] to do it,” Evers told the New Yorker in August.

“Today, let’s take back our state and our nation for the people — for working families, for kids, for students, and for teachers,” high school social studies teacher John Waldron said hours before he was elected to the Oklahoma state House. Waldron will be part of what the Oklahoma Education Association (OEA) calls the “Education Caucus,” a group of bipartisan lawmakers “with a direct tie to education,” including current and former teachers, support professionals and school administrators. The OEA said that caucus grew from nine to 25 members due to the 2018 midterm election. “There are now more educators in the state legislature than ever before,” the association said in a statement Tuesday. “No matter how you look at it, public education won.”

Some ‘heartbreaking losses’ at the polls

According to an Education Week analysis 177 current teachers ran for state legislative seats across the country this year. Of those teacher candidates, 42 won general elections on Tuesday. Education Week counted 78 teachers who lost in the general election and 57 who lost in primaries earlier this year. The American Federation of Teachers said 250 of its educator members were on ballots Tuesday for federal, state and local office — mostly in state legislative races. More than 100 members won.

The National Education Association boasted much higher numbers, though it defined “educator” more broadly, including current and retired teachers, administrators, support staff and higher education employees. The union said Friday that 1,080 educators were elected to state legislatures in the midterms out of nearly 1,800 who ran, according to its count.

But in West Virginia, Oklahoma, Kentucky and Arizona — where protesting teachers swarmed state capitols and railed against years of fiscal austerity and education budget cuts — the state legislatures remain Republican-controlled. And Republicans retained the governorship in all four states as well. The exception was Colorado, where Democrats took control of the state Senate and retained control of the state House.

“There is no doubt that the results of tonight’s major race was disappointing,” Oklahoma history teacher Alberto Morejon, one of the walkout organizers, said in a Facebook post. “However, what we’ve accomplished overall is nothing short of history.”

Union leaders in West Virginia, where the wave of teacher strikes began in February, lamented “some heartbreaking losses” on Election Day. One was West Virginia state Sen. Richard Ojeda, who became a hero of striking teachers, but lost his race for U.S. House after spending the final night of his campaign in the room where “Mingo County teachers helped launch a nationwide movement.” In a defiant concession speech aimed at President Donald Trump, he thanked his coal-mining uncles, fellow veterans and West Virginia teachers for showing him how to fight.

National teacher union leaders viewed the midterm outcomes as an overall success, focusing on Democratic victories in key gubernatorial races. “We don’t have a magic wand, and things don’t change in a minute,” says American Federation of Teachers President Randi Weingarten. “I’m always fearful that people think that once you have one victory, that immediately begets another and another and another. But it takes time.”

Gretchen Whitmer — the newly elected governor of Michigan, home state of Betsy DeVos — campaigned as a sharp critic of Trump’s Education Secretary and the effect her school choice agenda had on the state. In Illinois, Democrat J.B. Pritzker defeated incumbent Republican Gov. Bruce Rauner, who brought the lawsuit that resulted in this year’s Supreme Court ruling that dealt a blow to teachers unions. Laura Kelly, a Democrat who campaigned against the tax cuts that left public education funding in Kansas unconstitutionally low and nearly caused a school shutdown, defeated Republican Kris Kobach to become governor. And Tim Walz, a Democratic Congressman who was a high school teacher for 20 years, was elected governor of Minnesota.

Across the country, candidate talking points and campaign ads in the final weeks of the 2018 midterm elections also suggested that education had staying power as a mobilizing issue, even in states where there had not been widespread teacher activism. Education was the second-most mentioned issue in both pro-Democratic and pro-Republican gubernatorial ads from mid-September to mid-October, according to the Wesleyan Media Project, which tracks political ads. Education was surpassed only by health care for Democratic ads and taxes for Republican ads.

In his reelection ads, Arizona Gov. Doug Ducey touted new school spending and teacher raises — initiatives that came after massive teacher protests — and promised to do more for public education in the state. He defeated David Garcia, a university professor who had pitched himself as the “education governor.” But voters also overturned Ducey’s expansion of the school voucher program in the state — a blow to the school choice movement.

Texas Lt. Gov. Dan Patrick started running an ad in October about the value of teachers, identifying teacher pay as his priority, after his Democratic opponent Mike Collier made education central to his long-shot campaign. “The fight is not over. Dan Patrick told active teachers they’d see pay increases,” Collier tweeted Wednesday. “I’ll be holding him and other elected leaders accountable to Texans for the promises that were made.”

In the long run, teachers and education leaders are hoping that accountability will be the lasting effect of their activism.

“It changed the narrative in these races, where nobody was talking about education in a Senate race or a Congressional race. All of a sudden, people were talking about education. And educators were asking those folks, ‘What do you think about Betsy DeVos’ agenda to privatize public school?'” says Eskelsen Garcìa. “We now know that whether or not there’s an educator on the ballot, the education voter is going to be mobilized and is going to be organized. And today we begin the race for 2020.” 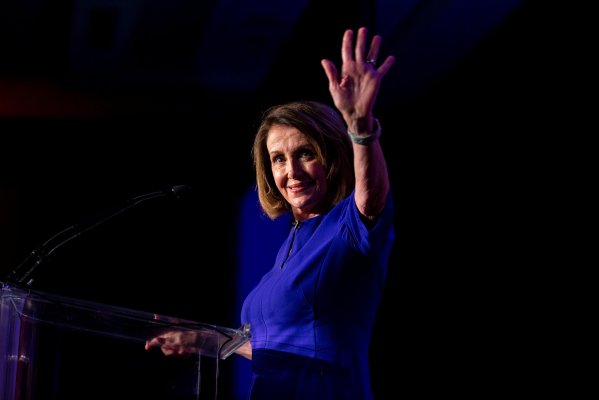 Democrats Had a Better Election Night Than It First Appeared
Next Up: Editor's Pick