'Close to a Complete Victory.' President Trump Claims a Win Even as Democrats Take the House

While Democrats took control of the House of Representative for the first time in eight years on Tuesday, President Donald Trump told the country that the midterms were actually a victory for Republicans.

“It was a big day yesterday, incredible day,” Trump said Wednesday. “And last night the Republican Party defied history to expand our Senate majority while significantly beating expectations in the House.”

In a move seemingly designed to steal some of the Democrats thunder the day after retaking the House, Trump gathered reporters for a press conference in the East Room of the White House to make the case that Republican voters rallied for politicians who mimicked the president and promoted his priorities and candidates who were cool on Trump lost.

“I thought it was very close to a complete victory,” Trump said.

He stayed on message during his prepared remarks, but quickly began sparring with journalists during the question and answer portion of the presser on issues related to immigration, civility and the special counsel’s investigation.

“We saw candidates I supported achieve tremendous success last night,” Trump said. Trump tweeted earlier in the day that those who “worked with me in this incredible Midterm Election, embracing certain policies and principles, did very well. Those that did not, say goodbye!”

Trump was an aggressive campaigner for down-ballot Republican candidates, hosting 30 rallies in the past 60 days around the country. “The president is best when he is on the road talking directly to the American people, and I think last night’s results demonstrate that,” says Trump’s former campaign manager Corey Lewandowski. “In the places where he was and spent the most time, you’ve seen his candidates be successful by and large.”

Trump also blamed Republican lawmakers who chose to retire this year, leaving open seats that were harder for the party to defend. In a remarkable moment, he shamed Republican candidates by name from the podium at the White House Wednesday who didn’t embrace him during their campaigns and then lost, including Rep. Carlos Curbelo of Florida, Rep. Mike Coffman of Colorado and Rep. Mia Love of Utah.

But the results were more mixed for his legacy than Trump will acknowledge, particularly in crucial battleground states he needs to secure a second term in the White House including Wisconsin, Michigan and Pennsylvania, three states that voted for Trump in 2016 but elected Democratic candidates on Nov. 6.

“The Trump thing works,” says GOP pollster Frank Luntz. “But that’s not enough in a typical presidential campaign. And he can now see that there’s a segment of America that is equally energized against him, and that’s why Democrats captured the House.”

Trump struck an open tone with House Democratic leader Nancy Pelosi on Wednesday, saying he wants to work with her party on economic growth, infrastructure, trade, and lowering middle class taxes. But he threatened not to work with Democrats on anything if they launch investigations into him on his finances, ethical issues or Russia. “You can’t do them both,” he said. “If they’re doing that, you can’t do the other.” 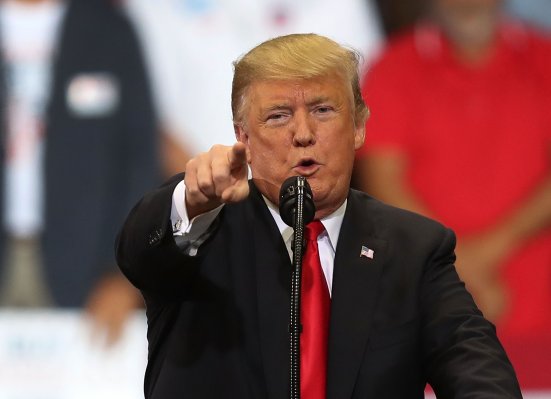 Trump Signals Doubt About Keeping the House Ahead of Midterms
Next Up: Editor's Pick