Florida voters approved Amendment 4 on Tuesday night in the 2018 midterm elections, restoring voting rights to more than 1 million people in the state who were previously convicted of felonies.

“This is transformative in Florida,” Howard Simon, Executive Director of the ACLU of Florida tells TIME. “We will no longer have second class citizens.”

Approximately 1.4 million people will be granted the right to vote in Florida elections because of Amendment 4, according to Public Citizen. The amendment, which passed Tuesday night with 64% of the vote, restores voting rights for people convicted of felonies as long as they have completed their sentences, though it excludes people convicted of murder or felony sex offenses. A disproportionate share of those arrested and incarcerated in Florida are minorities, particularly African Americans. In 2016, more than 418,000 black people, or or 17.9 percent of potential black voters in Florida couldn’t vote due to their past felony convictions, according to Vox.

For many former felons, the passage of Amendment 4 represents a shift in the way they view themselves in society. Marissa Alexander, who was convicted of aggravated assault in 2012 for firing a warning shot at her husband, who she said abused her, has advocated for the the amendment to restore former felons’ right to vote.

“To work in society, to contribute…and have things that affect you that pass and not be able to have a say, and now to be able to say collectively that our voice will count is a huge psychological [change],” Alexander tells TIME.

The amendment’s approval represents the culmination of decades of efforts by both individuals and advocacy organizations, including thousands of phone calls and hundreds of hours of local canvassing in the run up to November 2018.

“We have worked on this for almost 20 years,” says Simon. “When the 2000 election was affected by the felon purge list, we went to work to end Florida’s system of lifetime felon disenfranchisement.”

Only in Florida, Kentucky, and Iowa are former felons barred from voting even after they have completed their sentences. Florida did have a system established by Governor Rick Scott to restore voting rights to released felons, but the process often took years of work before someone could get a hearing for their civil rights to be restored, which was not guaranteed. As a result, Florida still has the highest number of citizens who cannot vote of any state, with more than 10% of potential voters prevented from casting ballots.

But even after Amendment 4, advocates say there is still more work ahead. Now, they say, they need to get people to vote.

“Now that the amendment will go into the constitution, I believe the effort now is to make sure that all of those people are registered so that their voice can count for the next election,” says Alexander. 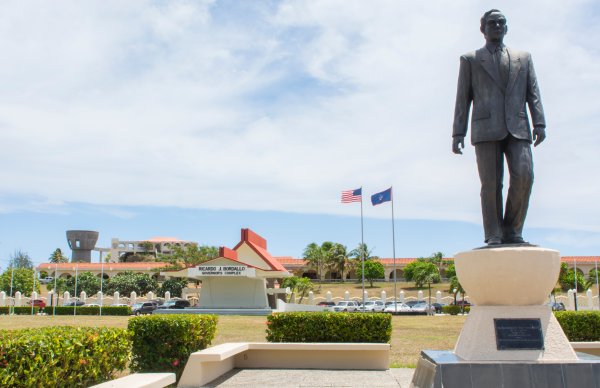 Guam Has Just Elected Its First-Ever Female Governor
Next Up: Editor's Pick