French President Emmanuel Macron Calls for a 'European Army' to Defend Against China, Russia and the U.S.

French President Emmanuel Macron is calling for the formation of a “real European army” to protect the continent “with respect to China, Russia and even the United States of America.”

Agence France-Presse reports that while on a tour of World War I memorials Tuesday, Macron said: “We will not protect the Europeans unless we decide to have a true European army.”

Macron has advocated for the mobilization of a collective European force since his election last year. But those calls may be received with more urgency after President Trump announced last month that the U.S. would pull out of a Cold War era nuclear weapons treaty with Russia. Trump has also displayed a tepid attitude in the past towards NATO’s mutual defense commitments.

“When I see President Trump announcing that he’s quitting a major disarmament treaty, who is the main victim? Europe and its security,” Macron said on a visit to Verdun, a French city that was the site of a major battle in 1916.

Europe needs to be prepared to “[defend] itself better alone, without just depending on the United States,” the French president added.

The E.U. launched an annual €5.5 billion ($6.3 billion) joint defense fund last year, and added another €13 billion ($14.8 billion) in defense spending in June to support development of new military technology. France has also led the formation of a nine-country rapid deployment force to respond to crises like evacuations or natural disasters.

Macron is preparing to host dozens of world leaders, including Trump and Russian President Vladimir Putin, on Sunday to mark the 100th anniversary of the World War I armistice.

But ahead of that anniversary, the French president has spoken of modern threats to European peace, including the reemergence of “authoritarian powers” and “intrusion attempts in cyber-space” seeking to derail democratic elections in Europe. (Russia has been accused of intervening in elections in France as well as supporting far-right parties in Germany and elsewhere.) 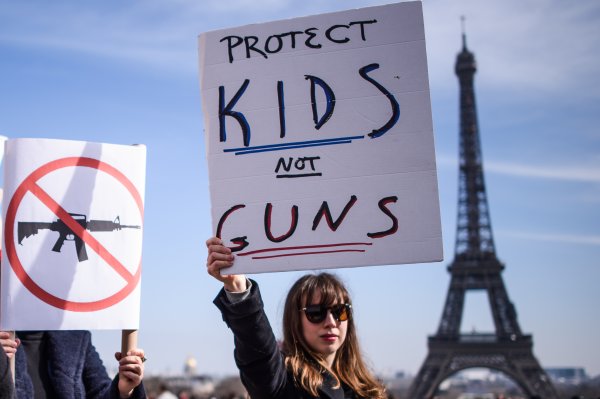 Fury in France After Teen Threatens Teacher With Fake Gun
Next Up: Editor's Pick