A controversial new voter ID law in North Dakota made casting a ballot more difficult for thousands of Native Americans living on reservations in the state this year. But in the face of a law critics called “plainly unconstitutional,” Native Americans in parts of North Dakota appeared to turn out to vote in record numbers in Tuesday’s 2018 midterm elections.

More than 5,100 ballots were cast Tuesday in North Dakota’s Rolette County, where the Turtle Mountain reservation is located, according to unofficial election results. Activists with Four Directions, a group that promotes voting access for Native Americans and was organizing in North Dakota this week, aimed to surpass turnout from 2008, a presidential election year when 4,619 votes were cast in the county.

“We topped the highest turnout since 2008 — pretty cool,” says OJ Semans, co-executive director of Four Directions and an enrolled member of the Rosebud Sioux Tribe in South Dakota, who was in Turtle Mountain on Tuesday. “You know when I came here, I didn’t think we could do it. But when I started working with the youth council — they put this together in four days. I saw the enthusiasm. I was with them in their march, their rally. They are the ones that lifted the elders up and turned them out.”

More than 1,460 ballots were cast in Sioux County, home to the Standing Rock Sioux Tribe. That exceeded the number of ballots (1,397) cast in the county in 2008. Semans says some Standing Rock precincts ran out of ballots on Tuesday and had to get more because turnout was higher than anticipated.

The North Dakota law — which requires that voters present identification displaying a street address, not just a post office box — disproportionately affected Native Americans on reservations, where street addresses are not common. After an October ruling from U.S. Supreme Court allowing the law to take effect, tribal leaders spent weeks scrambling to print ID cards for tribal members and assign street addresses. The legislation gained national attention due to allegations of voter suppression and because of the closely watched reelection campaign of Sen. Heidi Heitkamp, who was first elected in an upset victory in 2012 with broad support from Native Americans. Both Rolette and Sioux counties voted for Heitkamp in overwhelming numbers on Tuesday, but she lost in a landslide to North Dakota Rep. Kevin Cramer, the state’s lone Congressman who aligned himself closely with President Trump.

Proponents of the law argued it would reduce voter fraud, but voting rights advocates have warned it would systemically disenfranchise thousands of Native American voters. And activists on the ground Tuesday said there was a lot of confusion at the polls, describing instances of voters being turned away because poll workers did not accept tribal identification letters or because of discrepancies with their addresses.

“You really see a juxtaposition between how eager people are here to vote, and how at every step of the way, it’s being made as difficult as possible,” says Carla Fredericks, director of the American Indian Law Clinic at the University of Colorado Law School. Fredericks — an enrolled citizen of the Mandan, Hidatsa and Arikara Nation of North Dakota — returned to the state this week and spent Election Day on her reservation, helping Native voters.

“To me, that’s just tragic because I know our country, and especially Native communities and communities of color have a lot of issues with voter turnout,” she says. “And while the voter turnout is really strong, the impediments that are in place just seem really out of line with our Democratic values.”

Members of the Turtle Mountain youth council and tribal leaders march to a polling site near Belcourt, N.D. on Nov. 6, 2018.
Courtesy of Edward Falcon Jr.

Outside of a polling site on their reservation Tuesday, members of the Turtle Mountain Band of Chippewa Indians chanted, “North Dakota, you can’t do that.” Turtle Mountain high school and college students led a march in the snow to the polling place, carrying signs that said, “Warrior up,” “Don’t disenfranchise us,” and, “We are the grandchildren of those you couldn’t remove.”

Alexis Davis, a 19-year-old member of the Turtle Mountain youth council, helped lead get-out-the-vote efforts on the reservation during the past few days, though she was not particularly involved in politics before this election.

“But then this voter ID law came, and then I was paying attention, and then I started seeing quotes about how this election is so important and this election is going to make history,” she says. “They were trying to take a right away from us. It made us want to go in there and vote twice as much and make a statement.” 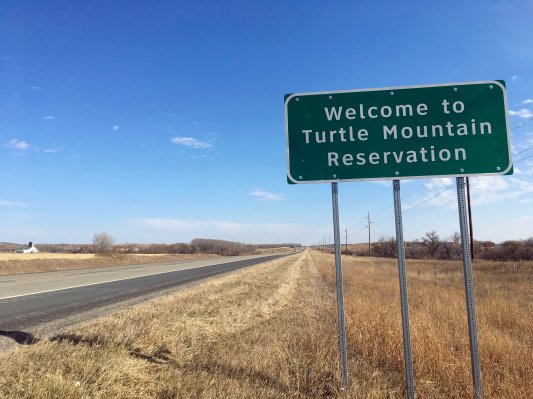