In this June 18, 2018 file photo, patches cover the back of a Girl Scout's vest at a demonstration of some of their activities in Seattle.
Elaine Thompson—AP/REX/Shutterstock
By Christian Berthelsen / Bloomberg

(Bloomberg) — America’s gender divide is leaving no generation on the sidelines.

A year after the Boy Scouts of America announced it would admit girls, the Girl Scouts of the United States of America punched back Tuesday with a federal trademark lawsuit seeking to block the boys group from rebranding itself simply as “Scouts.”

The Girl Scouts, called GSUSA in the filing, claim the move by the Boy Scouts will “marginalize” the female organization and “erode its core brand identity.” The Boys Scouts announced in May that it was changing its name to “Scouts BSA,” with members known as “Scouts.”

“Since BSA’s announcement that it would admit girls to its core programs, GSUSA’s fears about the damage that would be caused to its trademarks and the mission those trademarks symbolize have been realized,” according to the complaint filed Tuesday in Manhattan federal court. “Throughout the country, families, schools and communities have been told that GSUSA and BSA have merged, or even that GSUSA no longer exists. Parents interested in signing up for Girl Scouts programs have instead mistakenly signed up for the new girls’ programs offered by BSA.”

A representative for the Boy Scouts didn’t immediately respond to a request for comment.

The case was filed as Americans went to the polls to vote in midterm elections in which the gender divide is stark and expected to influence the outcome. A record number of women are seeking office in the election, and the #MeToo realizations of workplace sexual harassment in the last year have crystallized voter opinion on candidates and social issues.

In the lawsuit, the Girl Scouts claim their right to use “Scout” and “Scouting” marks in marketing to girls has long been recognized both by the law and by the Boy Scouts. But the Boy Scouts’ decision to open all of its programs to girls has crossed that line, according to a complaint.

The Girl Scouts seek a court order blocking the Boy Scouts from using the term “Scout,” “Scouts,” “Scouting,” or “Scouts BSA” without an “inherently distinctive or distinguishing term appearing immediately before it.”

The suit isn’t the first time the two organizations tangled in court. A century ago, the Boy Scouts sued to block the Girl Scouts from using the name “Scout,” according to The Atlantic magazine. 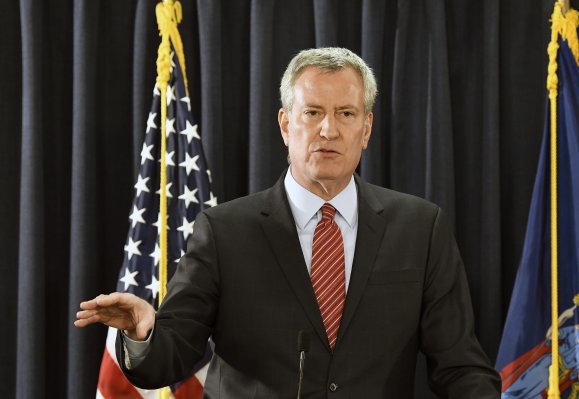 New York City Goes an Entire Weekend With No Shootings
Next Up: Editor's Pick