Democrats won the U.S. House of Representatives in Tuesday’s 2018 midterm elections, but lost seats in the U.S. Senate and failed to win several marquee races that would have represented a full rebuke of President Donald Trump.

After two years of Republican control in Congress, the Democrats gained 27 seats in the House, guaranteeing a majority of at least two seats. Winners were undetermined in 23 House races, with Democrats likely to claim nine of those seats, according to Associated Press projections.

Democrats hopes of winning the Senate and achieving an overwhelming “Blue Wave” — already slim because of a favorable election map for Republicans — were extinguished as results rolled in Tuesday. Losses in at least three key Senate races, including Beto O’Rourke in Texas, meant Republicans would have control of the Senate with an even bigger majority.

President Donald Trump, who campaigned hard to make the election about him, claimed victory, despite losing the House.

House Minority Leader Nancy Pelosi told supporters early Wednesday that Democrats would legislate in a bipartisan fashion and focus on issues like drug pricing and ethics reform while speaking at the Hyatt Regency in Washington D.C., where Democrats had convened for their election night celebrations.

“Thanks to you, tomorrow will be a new day in America,” said Pelosi, who is expected to run, possibly unchallenged, for Speaker of the House.

Pelosi’s office said that Trump had called her to congratulate her, and emphasized the portion of her remarks that focused on bipartisanship. Trump also tweeted congratulations to Pelosi Wednesday morning.

While the House results were a win for the Democrats, Trump’s divisive campaigning in the weeks ahead of the election may have paid off for Republicans who won key Senate races where the Democrats had hoped to contend.

The Democrats were at a deficit from the start. The 2018 election map for the Senate heavily favored Republicans — with ten Democrats up for re-election in states that Trump won by double digit margins in 2016.

Trump claimed the election was a “tremendous success” in a tweet Tuesday.

Here’s the latest on the 2018 midterm results.

Republicans were projected to retain their majority in the Senate after the midterms, and the party not only held on to control but gained three seats in the chamber, while the Democrats changed only one seat from red to blue. Here are all the seats that flipped:

O’Rourke was projected in the polls to be defeated by Cruz, despite his campaign receiving significant national attention. Speaking in El Paso Tuesday night, O’Rourke said he was still hopeful and inspired by voters in Texas. “Tonight’s loss does nothing to diminish the way I feel about Texas or this country,” he said.

Missouri Sen. Claire McCaskill was defeated by Republican challenger Josh Hawley. McCaskill, a moderate who was first elected to the Senate in 2006, conceded the election in a speech Tuesday night.

“This state drives me crazy but I love every corner of it,” she said. “I love even the reddest of the red counties. There were a lot of them tonight.”

“I still believe and I still trust the voters,” Gillum, who gained attention during the campaign for going after Santis’ associations with racists, said during a concession speech. “I still believe there are more of us who believe what is common, what is decent, what is right.”

Here are all the governors’ mansions that changed parties:

Democrats take control of the House. These are the seats that have flipped

The Democrats gained at least 27 seats in the House Tuesday night, which guaranteed a majority of at least two seats. Although some races are still too close to call, here’s a list of the districts that flipped Democrat:

Several key races are still too close to call

While many candidates claimed victory on Tuesday night, some key races were still too close to call when voters woke up on Wednesday — with some Senate races and the hotly contested Georgia governor’s race among them.

Write to Alana Abramson at Alana.Abramson@time.com and Mahita Gajanan at mahita.gajanan@time.com. 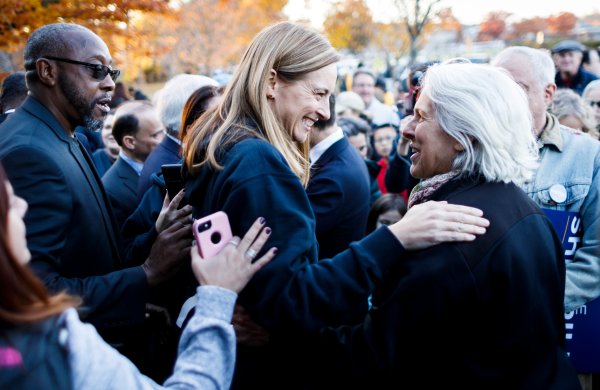 The Number of Veterans in Congress is Near an All-Time Low. The Midterms Might Change That
Next Up: Editor's Pick