U.S. Customs and Border Patrol scheduled a demonstration of its crowd control techniques on Tuesday at 10 a.m. at the El Paso, Del Norte Port of Entry, which is a few blocks from the the Armijo Recreation Center, an Election Day polling location.

El Paso is home to a large Hispanic community and O’Rourke’s election headquarters. O’Rourke is in a tight race with Republican Sen. Ted Cruz – though polls have shown Cruz consistently ahead.

“No walls, no CBP exercises (are) going to keep us from honoring our laws, our commitments,” O’Rourke told reporters Monday, according to Texas Monthly. “Why this is happening now, why the President is stirring these issues up at this moment with 24 hours before we decide this election, I’ll leave that to you to conclude.”

The Border Patrol announced the Election Day demonstration on Monday afternoon. The timing of the drill was deemed “suspicious” by the American Civil Liberties Union of Texas – which accused President Donald Trump and Texas Gov. Greg Abbott of voter intimidation.

“The Trump administration, and by extension the Abbott administration, have done quite enough to intimidate voters without staging military rehearsals on Election Day,” ACLU tweeted on Tuesday morning.

In a statement U.S. Customs and Border Protection spokeswoman Corry Schiermeyer blamed “inaccurate reporting” that caused “unneeded” confusion in border communities for the cancelation of Tuesday’s exercise. She said that the training exercises were meant to prepare for the potential arrival of the migrant caravan.

In a statement to ABC News, Homeland Security spokesperson Tyler Q. Houlton said there was no connection to the exercise and Election Day.

“The suggestion that ongoing exercises at ports of entry in anticipation of a potential mass arrival of migrants are tied to voting by any group is flat-out wrong,” Houlton said. “DHS has worked tirelessly to ensure the security of our election systems and will always secure our borders regardless of what day it might be.”

“The Mexican American Legislative Caucus is requesting the Trump administration and the U.S. Customs and Border Protection immediately cancel the planned mobile field force demonstration scheduled for Tuesday, November 6th, Election Day in El Paso, Texas,” the statement said. “This administration continues to use immigration policy for political purposes. The made-for-media ‘crowd control’ drill, conducted on Election Day, is a cynical effort to suppress the Latino vote in a region seeing record turnout. We demand that the administration immediately cancel tomorrow’s drill.”

In recent weeks Trump has stoked fears of a migrant caravan with over 4,000 Central Americans seeking asylum. The President has stated the caravan is packed with men he described as “criminals and unknown Middle Easterners mixed in” and has claimed the caravan is inching closer to the border in what he described as an “invasion.” The caravan is actually currently over 500 miles away from the border and is mostly populated of women and children, according to reports from the caravan. Last week, Trump announced he was planning on sending up to 15,000 troops to the U.S.-Mexico border to assist Border Patrol agents. 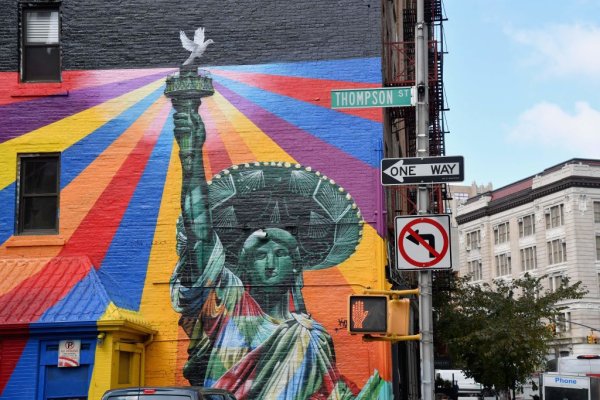 How We Can Fight the Trump Administration's Xenophobia
Next Up: Editor's Pick