President Trump Turned the Midterms Into a Referendum on Himself

“I want you to vote,” President Donald Trump told a rally crowd last month. “Pretend I’m on the ballot.”

On Tuesday, that pitch was tested, and the results were a split decision: Trump helped lead his party to gains in the Senate but a significant loss of seats in the House.

Trump inserted himself into the midterm elections like few presidents before him, wading into Republican primaries, hosting near constant rallies around the country and basing his message on fear rather than a record of accomplishment.

At 11:15 pm, when Republicans had cemented their majority in the Senate but Democrats were on their way to taking power in the House, Trump tweeted that the election had been a “tremendous success.”

Two hours earlier, White House spokeswoman Sarah Sanders had touted Trump’s role in the process. “Candidates that have embraced the president, embraced his policies and that he’s gone in and campaigned for and worked hard for, we’re seeing that pay off tonight,” she said around 9:30 pm Tuesday night. She cited Mike Braun, who unseated Senate Democratic incumbent Joe Donnelly in Indiana and helped cement a Republican majority in the upper chamber, and who benefited from three Trump rallies on his behalf.

“While midterm elections are typically referenda on the president, this one is even more so because Trump is such a divisive leader and he has done everything he could to place himself at the center of key campaigns,” says Jordan Tama, associate professor at American University’s School of International Service. According to Sanders, Trump hosted 50 rallies for the midterms— 30 in the past two months alone.

Trump’s influence likely helped lift some Republican candidates to victory: Braun and Ron DeSantis in the Florida gubernatorial race, for example. But his support wasn’t a silver bullet, and he wasn’t able to keep the House in Republican control.

As Nov. 6 neared, Trump seemed to sense the challenge before him. As he stumped for Republican candidates to whip up support, he began to manage his supporters’ expectations, telling crowds the weekend before the election that Democrats might “squeak it by” to win the House.

Trump wasn’t the only one who put his reputation on the ballot. Republican candidates in some of the country’s most competitive races gambled by tying themselves to Trump in a bid to turn out voters. DeSantis, who narrowly defeated Democrat Andrew Gillum to become the governor of Florida, even released an ad showing him reading Trump’s book The Art of the Deal to one of his young children and teaching another how to say “Make America Great Again.”

But even as Trump saw gains in the Senate, his divisive rhetoric and hard-line message on immigration may have energized the left more than the right in House races.

“Most American voters have strong views about Trump, whether they support or oppose him,” says Tama. “He’s galvanized many Americans who are deeply concerned about the country’s direction under Trump to want desperately to elect more Democrats to Congress.”

History was on the Democrats’ side in the House. Since 1946, the president’s party has lost an average of 25 House seats in midterm elections, according to Gallup. For presidents with approval ratings below 50%, like Trump, the average loss was 37 House seats. This year, Democrats only needed to win 23 seats to take power.

This was the first national referendum on Trump’s leadership since he won the presidency two years ago, and even more than most presidents, Trump staked his reputation on the results. “I think his rhetoric is one in which he’s putting himself more front and center rather than perhaps the policies or party agenda,” says Jacob Neiheisel, associate professor of political science at University at Buffalo.

That was a risky strategy with a potentially huge reward: had Republicans held on to both chambers of Congress, Trump would have been able to tout another major upset victory. But now he bears some of the blame for losing the House, even if he’s unlikely to agree. “He will find a way to backpedal regardless of the outcome if it’s not in his favor,” predicts Neiheisel. “Given that people have very short memories, it’s going to be a blip in the press for a minute, and then it’s on to the next tweet.”

Now, after enjoying a government in full Republican control for two years, Trump will get his first taste of divided government. One of House Democrats’ first priorities will be an ethics reform package, part of which is expected to include a provision that Trump must release his tax returns.

“Don’t worry about it,” the Trump said in West Virginia on Nov. 2 of what would happen if Democrats took power. “I’ll just figure it out.” 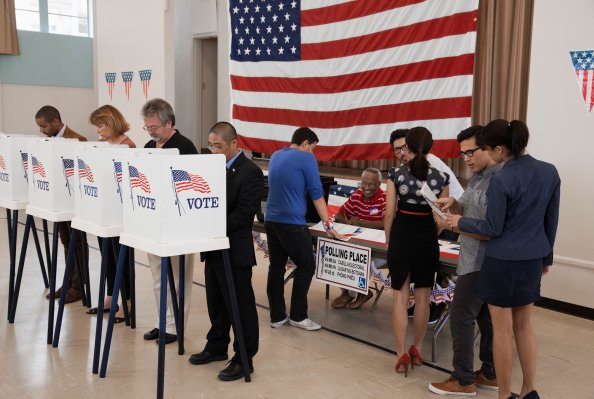 Red and Blue States Went Different Ways on Voting Rights on Tuesday
Next Up: Editor's Pick