Republican Josh Hawley defeated incumbent Democrat Claire McCaskill in the race for a Missouri Senate seat, becoming the third pickup for Republicans as they cemented their majority in the Senate Tuesday night.

McCaskill was one of the most vulnerable Democrats in the Senate. McCaskill is a moderate Democrat and Missouri voted for Trump over Hillary Clinton by nearly 20 points in 2016. Trump hammered McCaskill in the days leading up to the election, hosting two rallies in the state in the final week of the campaign to boost Hawley, the state’s attorney general. McCaskill painted herself as a moderate member of her party— she ran an ad that said she’s “not one of those crazy Democrats” and has said she supports Trump on border security.

But Trump sought to tie her to Democratic leadership and criticized her for voting against Supreme Court Justice Brett Kavanaugh’s confirmation. She’s been “saying such nice things about me,” Trump said at a campaign appearance in Missouri days before the election. “But you know what? She’ll never vote with me. That’s the problem.”

Hawley, on the other hand, pitched himself as a reliable conservative and a strong supporter of Trump and his policies. “She just doesn’t vote with Missouri,” Hawley told 41 KSHB of McCaskill. “The Supreme Court is so important, our rights are at issue, our future. The Brett Kavanaugh smear shows you the stakes. The Supreme Court, securing our border, jobs from overseas; This is about saving our country.” 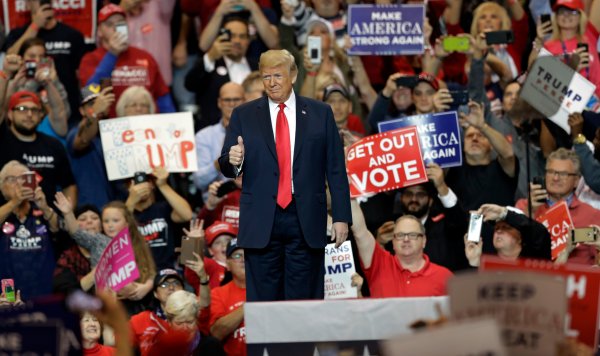 President Trump Turned the Midterms Into a Referendum on Himself
Next Up: Editor's Pick