You surely know the joke: Guy asks a friend, “What do you think the odds are that Angelina Jolie would go out for a drink with me?” Friend answers: “Maybe a trillion to one.” Guy responds: “So you’re saying there’s a chance!”

That’s the best way to think about the newly released draft paper by two astronomers from Harvard (Yes, I said Harvard) that Oumuamua, the mysterious, cigar-shaped object that whizzed through the solar system last year and was spotted by the Pan-STARRS 1 telescope in Hawaii, might actually be an alien probe from interstellar space. The authors of the paper, Shmuel Bialy, a post-doctoral researcher, and Avi Loeb, chair of the astronomy department, are right. It might be. But that doesn’t mean the guy in the joke will be inviting the aliens to join him and Angelina for the drink they’re not having tonight.

There’s no denying that Oumuamua (which means scout or messenger) is just plain weird. It’s 400 meters long, or about a quarter of a mile, but perhaps as little as a tenth as wide. It flew by us on a trajectory that indicated that it clearly did not come from within the solar system, and it actually accelerated during the course of its transit, suggesting that someone could have been putting the foot — or the tentacle, or the suction cup-enabled pseudopod — to the pedal. It was also red — or at least reddish — which is a nifty color for an interstellar sports car. That, no surprise, raised a lot of questions.

Perhaps the most important question Bialy and Loeb tried to answer is that business of the acceleration. Comets are known to speed up during their flight through the solar system, with solar heat causing an evaporation and outgassing that produces the comet’s characteristic tail and provides a propulsive push. But Oumuamua had no detectable tail. That doesn’t rule out an undetectable tail—one that’s so tenuous it was missed by astronomers — except that the object was spinning at a steady rate, and if a tail were responsible for its increasing speed, the spin would have picked up too.

Barring the aliens, this leaves two other possibilities: Solar wind, or the storm of charged particles forever streaming from the sun; and solar radiation pressure, or a gentle push imparted by electromagnetic energy when it contacts an object. It’s radiation pressure that’s behind what’s known as solar sail (or lightsail) technology, which is increasingly being used as an effectively free and inexhaustible means to accelerate spacecraft once they’re flying free.

Bialy and Loeb quickly ruled the out solar wind, since the force it exerts is “negligible,” certainly not enough to account for the acceleration that was observed. Solar radiation would be more than enough. But for that to work, you have to accept one more eccentricity in Oumuamua: it has to be thin — really, really thin, on the order of 0.3 to 0.9 millimeters, or about 0.01 to 0.03 inches. That would give it very low mass, which would make it easier to move, and which is why solar sails (or sailboat sails, for that matter) are kept as lightweight as possible while still retaining the strength to do the job.

If Oumuamua is really so paper thin, it would also be comparatively fragile, but Bialy and Loeb conclude that it could nonetheless have survived the journey it made to us. The biggest danger it would face would be collisions with interstellar dust that would ultimately slow it down or cause it to evaporate entirely. That dust, however, is very tenuously dispersed, and any single micro-collision with any single micro-grain would have two effects on the surface of Oumuamua: it would cause an infinitesimal bit of the object to evaporate, which would indeed erode it a little; while another infinitesimal bit would merely melt, but be preserved.

“Since the typical time between dust collisions is long,” Bialy and Loeb wrote, “any molten material would solidify before the next collision occurs.” The conclusion: “Oumuamua can travel the entire galaxy before a significant fraction of its mass is evaporated.”

The authors concede that it’s at least theoretically possible that Oumuamua is a lightsail, “floating in space as a debris from advanced technological equipment.” If the object had been used to transport beings or cargo between stars, that would explain what it was doing in interstellar space. Even if it were used to transport cargo merely from planet to planet, it could have broken free due to “dynamical ejection from a planetary system,” which is science speak for when the gravitational forces within a solar system effectively spit out an object. And while the reddish color of Oamuamua matches the organic-rich material that natural objects like asteroids accumulate over time, a derelict machine would have slowly eventually accumulated its own reddish dusting.

Finally, the authors really let it rip. “Alternatively,” they write, “a more exotic scenario is that Oumuamua may be a fully operational probe sent intentionally to Earth vicinity by an alien civilization.” (Italics theirs.) One bit of evidence in favor of this theory: if Oumuamua were a natural object ejected by a solar system, it would be possible to match the speed with which it approached us to the size and mass of the star that likely spit it out. But only about 1 in 500 stars in our region of the galaxy would produce precisely that speed, reducing the odds of a natural source. (Of course, there is no way of knowing if Oumuamua encountered any other objects or gravitational influences that would have altered its speed or trajectory.)

Ultimately, the authors offer no definitive conclusion — which they couldn’t, given the limited data. They do argue that it probably makes sense to conduct deep sky scans searching for further possible evidence of artificial lightsails, “irrespective of whether Oumuamua is one of them.” Even when aliens are on the line, in the sober world of science, that sensible suggestion is about as giddy as you can expect things ever to get. 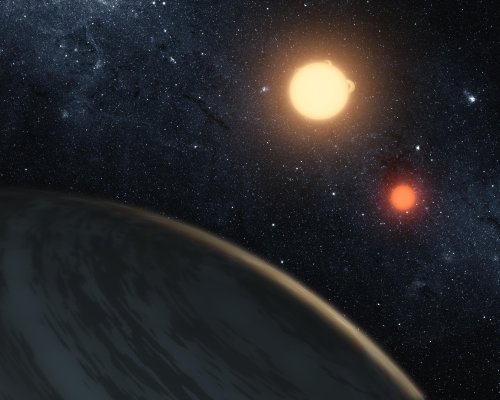 Kepler Found Science and Art in Exoplanets
Next Up: Editor's Pick