Most candidates spend the day before the election huddled with advisors or knocking on doors. Haley Stevens spent it doing her favorite thing: learning about new digital manufacturing systems at the Michigan Manufacturing Technology Center.

Stevens, 35, worked on President Obama’s auto task force to help save the Michigan auto industry from disaster during the Great Recession. Now, as a Democratic candidate in Michigan’s 11th congressional district, she spends most of her time talking about how to build a manufacturing workforce for the 21st century. On Monday she was learning about how to use light and sensors to guide workers assembling auto parts, and how 3D printers could make in hours a motor that normally takes months. “Another example of how Michigan is leading the future,” she says, pointing to a chart of innovations in digital manufacturing. “I’d like that in my office after tomorrow.”

Stevens is at the center of a shift this year in Michigan politics. The state has a long history of electing women to high office. But two years ago, Michiganders mostly voted for men: Democrats picked Bernie Sanders in the Democratic presidential primary, and voters backed Donald Trump in the general election. Only two women, both incumbents, were among the 14 Representatives Michigan sent to House that year.

Now, in a year when an unprecedented number of women are running for office all over the country, the state that helped make Trump president is also the state with the most notable surge in enthusiasm for female candidates. Democratic women are running strong races up and down the ticket. Senator Debbie Stabenow and gubernatorial candidate Gretchen Whitmer both have solid leads over their male Republican opponents, according to a new poll released Monday, mostly thanks to a massive edge among women voters: Stabenow is up 23 points with women, while Whitmer is up 28. Democratic Attorney General candidate Dana Nessel and Secretary of State candidate Jocelyn Benson also have leads heading into Election Night.

Stevens is favored to win the open seat vacated by GOP Rep. Dave Trott. (She’s running against Lena Epstein, former Michigan chair for the Trump campaign, so Michigan’s 11th will be represented by a woman no matter the outcome on Tuesday.) If she does, she’ll be joined in the Michigan House delegation by other Democratic women. Rashida Tlaib is running unopposed in Michigan’s 13th district, making her all but certain to become one of the first Muslim-American women in Congress. Former CIA official Elissa Slotkin is mounting a tough challenge to Rep. Mike Bishop in Michigan’s 8th district. Former state representative Gretchen Driskell has outraised GOP Rep. Tim Wahlberg in Michigan’s 7th district. Former teacher Cathy Albro is challenging Rep. Justin Amash in a heavily Republican district. And the two Michigan incumbents, Debbie Dingell and Brenda Lawrence, don’t seem to be going anywhere.

“The common denominator isn’t that we’re all Democrats. It isn’t that a lot of us are women, it’s that we’re working really hard,” Whitmer says in an interview at a campaign stop Monday, as she visited Stevens’s campaign offices. “We’re working just as hard as the people in this state, and they need leaders who show up, roll their sleeves up, and try to solve problems.”

Democratic candidate for Michigan's 11th Congressional District Haley Stevens hugs her neighbor after running into him while voting at Deerfield Elementary School in Rochester Hills, Mich, on Tuesday, Nov. 6, 2018.
Erin Kirkland for TIME

Michigan has a history of electing women, from Stabenow to former Governor Jennifer Granholm, so in some ways the trends from around the country feel less notable here. “It’s old hat,” says David Dulio, director of the Center for Civic Engagement at Michigan’s Oakland University. “We’ve voted for women a lot.”

At the same time, few of the women Democrats running here are doing so on a platform that puts women’s issues front and center. Whitmer’s campaign slogan is to “fix the damn roads.” Stevens is running on manufacturing jobs. Slotkin is promising a return to decency and civility in Washington. That dose of practicality seems to be boosting Democratic women at a time when many voters are sick of the partisan squabbling in Washington.

“I think there’s something special going on in Michigan. I think that we’re reclaiming something,” says Stevens. “How do we get politics back in the business of making people feel good again?” 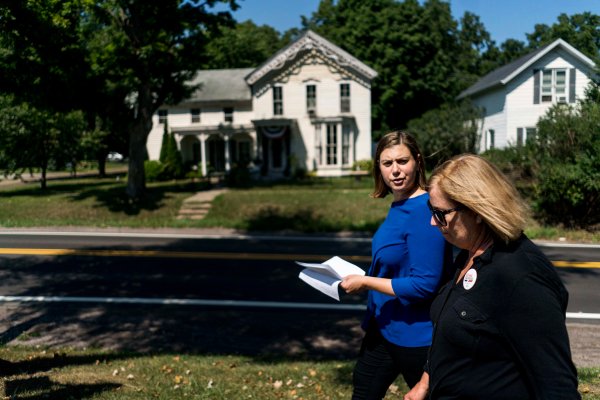 Elissa Slotkin Wants the Democrats to Be the Party of Patriotism
Next Up: Editor's Pick