How President Trump Helped a Democrat Win in New Jersey

Sen. Bob Menendez came back from a federal corruption trial and low favorability ratings to win a third term Tuesday, thanks to an inadvertent lift from President Donald Trump.

After facing a federal corruption trial in 2017 over allegations that he pushed for a friend’s business interests in exchange for private jet rides and a vacation to Paris, the New Jersey Democrat looked somewhat vulnerable.

In October, several polls indicated Menendez was ahead of former pharmaceutical executive Bob Hugin in this solidly blue state by only single digits — two of which showed only a five point lead. Both of these polls also reported margins of error around 4%.

But on Election Night, the race was called by the Associated Press early in Menendez’s favor.

In swing states such as Florida and Ohio, close midterm races are to be expected. But in New Jersey — where voters have not elected a Republican senator in nearly four decades and where former Secretary of State Hillary Clinton won by 14 points in 2016 — the surveys worried some Democrats, who relied on races such as these if they were to have any chance in reclaiming control of the Senate.

Katherine McCabe, a political science professor at Rutgers University in New Jersey, told TIME that the national political climate weighed heavily on New Jersey voters as they cast their ballots.

Indeed, the editorial board of the Newark Star-Ledger, in its endorsement of Menendez, urged voters to “choke it down” and vote for him.

“This year’s U.S. Senate race presents the most depressing choice for New Jersey voters in a generation, with two awful candidates whose most convincing argument is that the other guy is unfit to serve,” the editorial board wrote.

Menendez, the ranking member of the Senate Foreign Relations Committee, has been hampered by favorability ratings in the 30s. Last year’s corruption trial ended in mistrial in November of 2017 when the jurors were unable to reach a verdict. At the beginning of 2018, the Department of Justice dismissed all of his remaining charges.

Hugin frequently cited the allegations against Menendez as a reason the Democratic hold on the state should end. “He’s embarrassed us. It’s a disgrace. A moral failure. It’s time for change. And that’s what is resonating with the people of New Jersey,” he said in a recent radio appearance.

Despite running as a Republican, Hugin made efforts to distance himself from Trump’s stances on birthright citizenship, gun control and the Affordable Care Act. Hugin tweeted it was “wrong” to end birthright citizenship, advocated for universal background checks on guns and said parts of Obamacare, like guaranteeing coverage for pre-existing conditions and allowing children to stay on their parents plans until age 26, were “good.”

But none of this was enough to end the four-decade losing streak for New Jersey Republicans hoping to serve in the upper chamber. 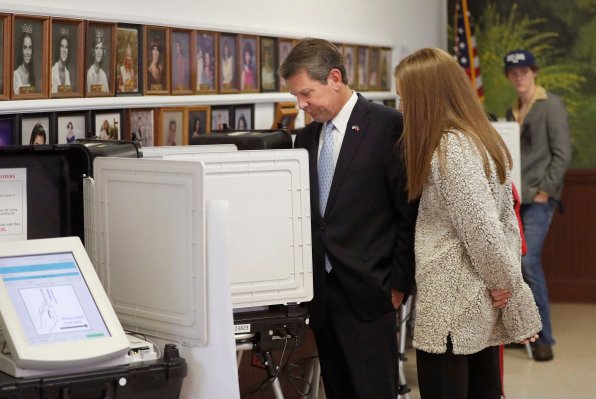