The Race for Georgia Governor Just Keeps Getting Messier. And It Might Not End Tuesday

The historic race for Georgia governor is expected to come down to a razor-thin margin of victory.

The toss-up race between Democrat Stacey Abrams and Republican Brian Kemp has elevated concerns about the effect of voting laws and election security. And if neither candidate receives more than 50% of the vote on Tuesday because of Libertarian candidate Ted Metz, the election will head to a runoff, prolonging the heated race. A runoff, if one is required, would take place Dec. 4.

Georgia is just one of several states where new laws have to led to concerns about voter suppression. Voters in at least nine states are facing more stringent voting laws than they did in 2016, according to a report by the Brennan Center for Justice.

Here are the key points to know about the accusations about voting access and election security in Georgia, ahead of Tuesday’s high-stakes gubernatorial election:

Republican gubernatorial candidate Brian Kemp is currently Georgia’s Secretary of State — a position that puts him in charge of elections in the state and has fueled concern about a potential conflict of interest.

Former President Jimmy Carter, a Democrat and Georgia resident, called on Kemp to resign as Secretary of State last month, warning that “popular confidence is threatened” by Georgia’s history of racial discrimination, concerns about the security of voting machines and Kemp’s role “overseeing the election in which you are a candidate,” according to a letter obtained by the Associated Press.

“This runs counter to the most fundamental principle of democratic elections — that the electoral process be managed by an independent and impartial election authority,” Carter wrote.

“In order to foster voter confidence in the upcoming election, which will be especially important if the race ends up very close, I urge you to step aside and hand over to a neutral authority the responsibility of overseeing the governor’s election,” Carter said. “This would not address every concern, but it would be a sign that you recognize the importance of this key democratic principle and want to ensure the confidence of our citizens in the outcome.”

The “exact match” law drew heavy criticism from voting rights advocates, who warned it would disproportionately harm minority voters in a state with a long history of civil rights-era voter suppression.

An Associated Press analysis last month found that roughly 53,000 voter registration applications were pending in Georgia because of the “exact match” law, and nearly 70% of the applicants on hold were black.

On Friday, a federal judge dealt a blow to Kemp’s use of the law, ruling that roughly 3,000 people could cast ballots Tuesday after being flagged as ineligible to vote because of the “exact match” law. The judge’s injunction requires election officials to allow a person to vote with a provisional ballot if they lack proper documentation and return later with proof of citizenship.

Kemp has also faced scrutiny for purging Georgia’s voter rolls of 1.5 million voters between 2012 and 2016, according to the Brennan Center for Justice. His campaign has denied any allegations of discriminatory voter suppression.

“Thanks to Brian Kemp, it’s easy to vote and hard to cheat. Any accusations made to the contrary are baseless, ridiculous, and politically motivated,” spokesperson Cody Hall said in a statement last week.

On Sunday, Kemp’s Secretary of State office accused the Georgia Democratic Party of a “failed attempt to hack the state’s voter registration system” and launched an investigation into the party. Kemp cited no evidence at the time of the announcement.

The Georgia Democratic Party vehemently denied the claim, dismissing it as “yet another example of abuse of power by an unethical Secretary of State.” The party shared the text of an email that it says triggered the investigation.

According to the Democratic Party, someone identified as Richard Wright sent an email to Rachel Small, a volunteer for the state party. In the email, Wright alerted Small to concerns about the integrity of the state voter registration website. Small then forwarded that email to the party’s director of voter protection.

“This political stunt from Kemp just days before the election is yet another example of why he cannot be trusted and should not be overseeing an election in which he is also a candidate for governor,” Democratic Party of Georgia Executive Director Rebecca DeHart said in a statement.

A spokesperson for the Secretary of State’s office claimed Sunday that “no personal data was breached and our system remains secure.” But ProPublica reported that, at the same time, it “found state officials quietly rewriting the website’s computer code.” The news organization encountered software fixes made Sunday evening.

Georgia’s Secretary of State office has referred all questions to the Georgia Bureau of Investigation, which confirmed it will conduct a criminal investigation.

Abrams has accused Kemp of playing a role in a “nationwide system of voter suppression that will not work in this election.”

“This is a desperate attempt on the part of my opponent to distract people from the fact that two different federal judges found him derelict in his duties,” Abrams said of the investigation. 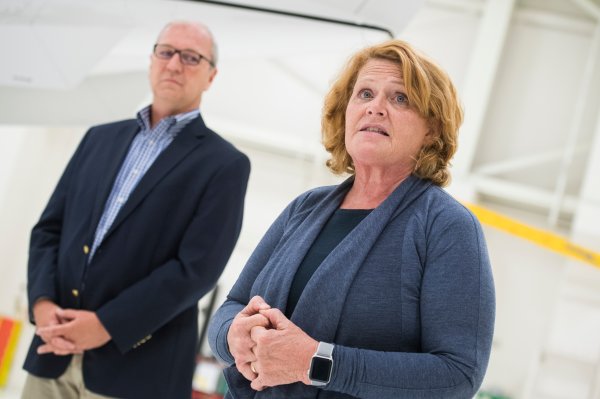 North Dakota Democrat Heidi Heitkamp Is Predicted to Lose. But She Has Defied Expectations Before
Next Up: Editor's Pick