Republican Ron DeSantis won Florida governor’s election in part by turning the race into a referendum on Donald Trump.

After a primary ad in which he built a wall and read “The Art of the Deal” with his kids, DeSantis was helped by the president’s involvement in the race, even as his Democratic opponent Andrew Gillum took hard lines against Trump’s actions at the national level.

With 99% of the votes accounted for, DeSantis was ahead of Gillum by more than 75,000, NBC reported late Tuesday night.

For his part, Gillum, the Tallahassee mayor, presented a platform that was in stark contrast to the President’s on national policies that governors have little control over. He advocated for “Medicare for All” before admitting that Florida likely couldn’t accomplish a single-payer system on its own, called for the abolishment of Immigration and Customs Enforcement (ICE), a federal agency, in its current form, and was vocal about the importance of DACA, a federal immigration policy.

DeSantis might not have even made it to the general election without Trump’s very early endorsement. Adam Putman, DeSantis’ opponent in the Republican primary, was arguably better-known and objectively better-funded.

Doug Ahler, a political science professor at Florida State University, said that Trump was a factor in the race.

“Florida’s governor’s race is a referendum on President Trump, perhaps more than any other major race this election cycle,” he said.

Trump won the state by a slim margin — 1.2% of the popular vote — in 2016. Since then, his favorability rating hasn’t fared well. Only 39% of the state’s voters said they approved of the President, according to poll results released in late September by Florida Atlantic University. The same report indicated Trump was losing his grip on independent voters, too. Only 35% approved versus 39% that disapproved, which is why many were surprised by DeSantis’ victory.

Gillum had based his campaign around progressive issues. For Floridians, he supported expanded Medicaid coverage, an increased starting salary for teachers and and more stringent gun control measures, such as bans on assault weapons and limits on the size of magazines.

Meanwhile, DeSantis, who resigned from his congressional seat after winning the Republican primary, presented himself as an extension of Trump’s conservatism.

He advocated for stricter immigration laws, repealing former President Barack Obama’s Affordable Care Act, and has said that he would have vetoed the legislation that provided stricter gun control measures after 17 people were killed during a shooting rampage at Florida’s Marjory Stoneman Douglas High School.

“If you look at campaigns in the past couple of decades, they have become much more about turning out your base rather than persuading voters,” he told TIME. Fortunately for DeSantis, that strategy paid off.

Gillum wasn’t immune to scandals. He was accused of accepting tickets to the Broadway hit, “Hamilton” from a group that included an undercover FBI agent during a 2016 trip he took to New York City as mayor. Gillum’s campaign asserted that Gillum believed the tickets were reserved for him, but that he thought his brother paid for them.

Meanwhile, DeSantis’ campaign was plagued by actions some perceived as racist. He received criticism for speaking at a conference hosted by a white nationalist, chose not to return money from a donor who used a racial slur against Obama and was reportedly a moderator for a Facebook page full of racially insensitive memes. During a Fox News appearance the day after the primaries, DeSantis said “the last thing we need to do is to monkey this up by trying to embrace a socialist agenda with huge tax increases and bankrupting the state,” in reference to his new opponent, a 39-year-old black man.

A spokesman for his campaign asserted the monkey comment had nothing to do with skin color, but it’s not clear Gillum bought the excuse.

“I’m not calling Mr. DeSantis a racist,” Gillum said during their last debate. “I’m simply saying the racists believe he’s a racist.” Footage of the exchange went viral across the nation, let alone in Florida.

Comments from other Republicans likely hurt him too. At a recent DeSantis rally, U.S. Agriculture Secretary Sonny Perdue said the race was “cotton-pickin’ important.” Meanwhile, Trump likened Gillum, who graduated from a historically black university and grew up in a working class household, to a thief in a tweet about a week before the election.

Though it turns out, these events didn’t hurt DeSantis enough to sway things in Gillum’s favor.

It’s clear that Floridians didn’t completely ditch their conservatism in the midterms, but whether the state maintains that position until 2020 is less so.

It’s “kind of like trying to figure out who’s going to win the NBA Finals in 2020 based on stats from last season. And that might be easier,” Ahler joked. “The Warriors are more predictable than the President.” 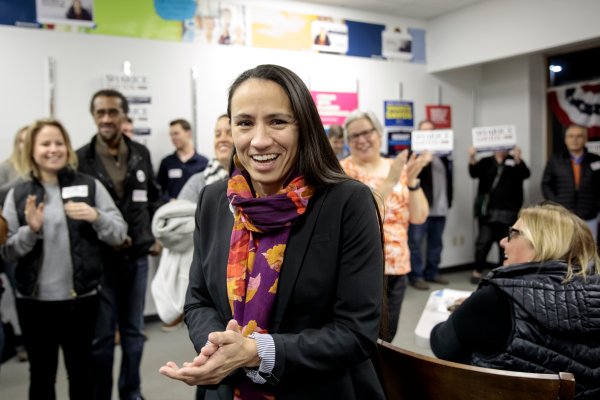