It's Election Day in America. Here Are 13 Races to Watch as Results Roll In

The 2018 midterm elections Tuesday will have an outsized effect on American politics for the next few years.

A historic number of women and minorities are running, meaning that it’s very likely that America’s political class could start to look more like the people who elect it. If Democrats retake the House of Representatives, as expected, they could gain new powers to investigate President Donald Trump’s Administration and block his agenda.

And changes at the state level could touch on everything from gerrymandering to recreational marijuana to climate change.

With so many races, it can be hard to keep track, so TIME has put together a rough guide to some of the most interesting questions that will be settled by Tuesday’s election results.

Here are some of the races to watch in the 2018 midterm elections.

Will Democrats take the House?

Democrats are projected to win the House of Representatives, but there’s a slim but still real chance that Republicans could hang on. To get a sense of how the night is going to go, watch for races featuring Republican incumbents like Rep. Andy Barr in Kentucky and Rep. Barbara Comstock in Virginia, where polls will close early. If the incumbents can hang on in those races, it will be a sign the night may be more favorable for House Republicans than expected.

A number of Republican candidates have decided to embrace Trump in hopes that he’ll energize the conservative grassroots to turn out for them. There’s a risk in some purple states that they could also energize liberal voters, but candidates for senator and governor have decided it’s worth the tradeoff. If the gamble works, that will solidify Trump’s hold over the party, but if it fails, it could lead to an internal debate within the GOP over its future.

Will Republicans keep the Senate?

Republicans are projected to maintain control of the Senate, but there is a narrow path for a Democratic upset. It would mean troubled Democratic incumbents like Sen. Heidi Heitkamp of North Dakota win while Republican incumbents such as Sen. Dean Heller of Nevada lose. While every race would count, two of the more interesting ones to watch involve the seats left vacant by retiring Trump critics Bob Corker of Tennessee and Jeff Flake of Arizona. Also of note: Can Taylor Swift’s endorsement help?

Read More: A Crucial Senate Race in Tennessee Is Coming Down to the Wire

Will more women get elected?

Women have already broken the records for the number of candidates for governor and Congress, and there are signs that they could make history again in the midterms. That includes both potential firsts, such as the first Native American woman in Congress and the first African-American woman to serve as governor, as well as what some observers have predicted could be a “pink wave” of historic numbers of women winning races for the House and Senate.

Read More: Here Are Some of the Women Who Could Make History in the Midterm Elections

Will young voters turn out?

Young voters have strongly negative views of Trump and the Republican Party, but they do not turn out to vote as reliably as older Americans, who are more supportive, especially in midterms. There are signs that this election may be different, however. Youth turnout rates among early voters are already much higher than 2014, while a poll from the Harvard Institute of Politics showed voting among younger Americans could reach record levels this year.

Read More: Inside a 22-Year-Old’s Campaign for a Connecticut State Senate Seat

How is Trump doing in the 2020 battlegrounds?

The President is not on the ballot this year, but many election watchers are keeping a close eye on races in three states he narrowly won in 2016 for clues to how his re-election effort may fair. In Wisconsin, Republican Gov. Scott Walker is facing a tough fight for a third term in office, while Democrat Gretchen Whitmer is ahead in the polls in Michigan’s open gubernatorial race. Meantime, in Pennsylvania, incumbent Democratic Sen. Bob Casey appears to be cruising to victory.

Read More: These Races for Governor Are Really Tight — And Could Impact You Even If You Don’t Live There

Republican Senator Ted Cruz of Texas (R) listens as Democratic challenger and US Representative from Texas Beto O'Rourke (L) gives his final remarks during a debate before the US Midterm elections in San Antonio, Texas, on Oct. 16, 2018.
TOM REEL—POOL/EPA-EFE/REX/Shutterstock

Will Texas become a purple state?

Democrats have not won statewide in the Lone Star State since 1994, but three-term Rep. Beto O’Rourke is seeking to upend that trend through massive small-dollar fundraising and aggressive campaigning. While O’Rourke has captured the imaginations of many Democrats, it’s still an open question of whether he can beat incumbent Sen. Ted Cruz. But even if he loses, he could help other Democratic candidates down-ballot, and a strong showing would portend a shift in Texas politics.

Will voters approve a carbon tax to fight climate change?

The Trump Administration has prioritized rolling back climate change measures, leaving many state and officials to pick up the slack. Voters in Washington state will decide whether to enact what would be one of the biggest steps to filling the void on global warming void with what would be the country’s first carbon tax. Observers say that a success would likely inspire similar efforts in other states and shape a burgeoning effort at the federal level.

Read More: Climate Change Is on the Ballot in Washington State. Here’s Why It Matters 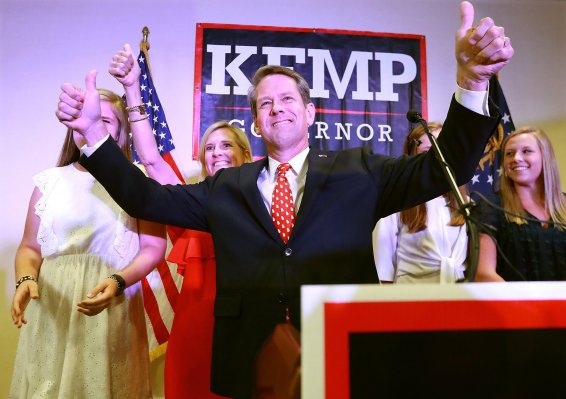 The Race for Georgia Governor Just Keeps Getting Messier. And It Might Not End Tuesday
Next Up: Editor's Pick