What to Know About the U.S. Sanctions 'Snapping Back' on Iran

A raft of U.S. sanctions on Iran snapped back into force Monday, six months after the Trump Administration withdrew the U.S. from the Iran nuclear deal. European powers have promised to try to alleviate the measures, which are designed to cripple Iran’s economy. Here’s what to know about the sanctions:

What was the Iran nuclear deal?

Before the 2015 nuclear deal, world leaders had long feared that Iran was developing nuclear weapons, despite its claims that its nuclear program was entirely peaceful. In a bid to pressure Iran to stop enriching uranium, the U.S., U.N. and E.U. imposed harsh sanctions on Iran’s banks, trade and gas exports, and the oil sector, costing the country more than $160 billion in oil revenue from 2012 to 2015 alone.

In July 2015, after more than two years of negotiations led by U.S. Secretary of State John Kerry, Iranian president Hassan Rouhani reached a historic deal with the U.S., the U.K., France, China, Russia and Germany, known as the Joint Comprehensive Plan of Action (JPCOA). The deal meant it would take Iran at least a year to acquire enough nuclear material to build a bomb, rather than just a few months. In exchange for the lifting of sanctions, Iran agreed to curb its nuclear activities, reduce its stockpile of enriched uranium, cut down the number of installed centrifuges by two-thirds, and allow international observers into the country to “unprecedented monitoring and access.”

Inspectors from the International Atomic Energy Agency said in August that Iran is still abiding by the deal.

Why did the U.S. withdrawal from the Iran nuclear deal?

President Donald Trump has called the agreement “the worst deal ever” and said it goes too easy on Iran, largely because it is not permanent and allows the country to start enriching uranium again after 10 years, in 2025. On May 8, he declared the U.S. would withdraw from the deal, leaving its future unclear. Trump has said he wants a “real comprehensive and lasting solution” to be found in its place.

“It is aimed at depriving the regime of the revenues that it uses to spread death and destruction around the world,” he said.”Our ultimate aim is to compel Iran to permanently abandon its well-documented outlaw activities and behave as a normal country.”

What sanctions will now be in place?

Monday marks the end of a 180-day wind-down period following the U.S.’ withdrawal from the JPCOA. From Nov. 5 onward, all the American sanctions that were in place before 2015 will snap back into force. They target Iran’s energy, ship building, shipping, and banking sectors.

Pompeo said eight countries will be granted waivers, allowing them to buy Iranian oil, if they prove they are trimming their imports. Bloomberg reports that the exemptions are intended to prevent oil prices from increasing.

Treasury Secretary Steve Mnuchin said Friday the Treasury Department will add over 700 names to its list of blocked individuals and businesses, including 300 new entries. “This is substantially more than we ever have previously done,” he said, adding that those who do business with the sanctioned sectors risk losing access to the U.S. financial system. “We are intent on ensuring that global funds stop flowing to the coffers of the Iranian regime.”

The U.K., France and Germany have each criticized the U.S.’ decision and said they will stick to the deal. China and Russia also say they will keep trading with Iran in defiance of Washington.

European governments have pledged to protect European companies that do business with Iran by launching a special financial vehicle to allow trade with Iran without violating U.S. sanctions. But diplomats say this will not be ready in time to aid transactions on Monday.

Economists say it will be difficult for the other signatories of the deal to protect Iranian trade because big banks will be too afraid to risk sanctions by dealing with Iranian transactions. A key area of concern is the global financial messaging and payment service SWIFT. Mnuchin has ordered the Belgium-based company to disconnect Iranian businesses from its service.

Mnuchin says transactions made for humanitarian purposes will be exempt from the sanctions. But diplomats have condemned his refusal to name a specific bank through which they can be safely made.

What does Iran say?

“We will proudly break the sanctions,” Rouhani said at a meeting with economists broadcast on Iranian national television as the sanctions came into force Monday morning. He vowed to keep selling oil abroad.

Washington’s withdrawal from the deal has already prompted many companies to leave Iran and undermined the economy’s recovery from years of international sanctions. The local currency, the rial, has lost 70% of its value this year and inflation is spiraling. Iranians worry the sanctions could lead to higher unemployment, which currently stands at 40%.

But the tone on the streets of Tehran has been defiant. Thousands of Iranians gathered in the capital on the eve of the reintroduction of sanctions with some burning U.S. flags and shouting “Death to America.” The demonstration Sunday also marked the 39th anniversary of Iranians taking over the U.S. embassy following the ousting of Iran’s U.S.-backed king during the 1979 Islamic Revolution. 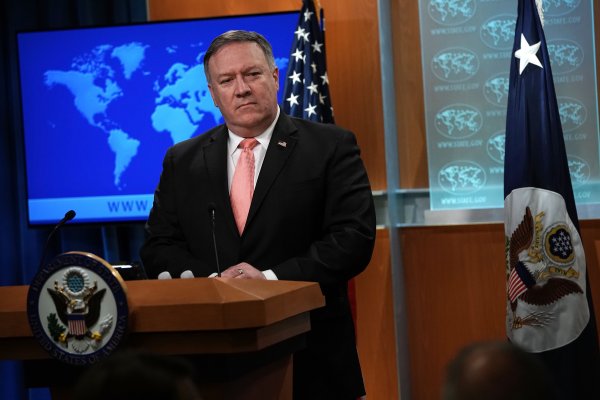