Elissa Slotkin Wants the Democrats to Be the Party of Patriotism

Many of the Democratic women who are running for office for the first time this year consider themselves part of the “Resistance” to President Donald Trump’s agenda. Not Elissa Slotkin. The Democratic candidate in Michigan’s 8th district says she’s challenging Republican incumbent Mike Bishop out of patriotism, not protest.

Slotkin has the resume to make the case. She served three tours in Iraq as a CIA analyst, then on the National Security Council as director for Iraq under President George W. Bush. She briefed Bush so frequently on Iraq policy that they developed a friendly relationship, even though they often disagreed. Slotkin stayed on through Barack Obama’s presidency and ultimately became the Acting Assistant Secretary of Defense, where she oversaw policy for some of the Pentagon’s most pressing issues.

She says there were two things that spurred her to run for office this year. One was the mood in Washington after Trump’s election: the sense that Republicans and Democrats who had once cooperated despite their disagreements now seemed to be in open warfare. “For me, as someone who worked for both Republicans and Democrats, it felt so different,” she says, “and so ugly, and so unbecoming of this country.”

The other was health care. Before she passed away, Slotkin’s mother had struggled to get affordable insurance because of a pre-existing condition (she had survived breast cancer as a young mom). When Slotkin saw Bishop smile as he joined Trump at the White House to celebrate the GOP vote to repeal the Affordable Care Act, she was enraged. “It was like Christmas for him,” she says. “And I turned to my husband and I said, ‘No, You don’t get to do that. You don’t get to ignore your constituents and vote against their interests and keep your job.'”

In a district that leans conservative, Slotkin has made it a tight contest by emphasizing the need to tone down the partisan squabbling. “I don’t believe all Republicans are bad,” she says, noting her dad is a Republican and her in-laws are Trump voters. Republican Women for Progress, a PAC founded by anti-Trump conservative women, has spent $50,000 on an ad featuring a Republican woman supporting Slotkin.

Slotkin also doesn’t identify with the progressive activists who have dominated Democratic politics this year. “I don’t consider myself part of the Resistance because that’s against something, and you have to be for something,” she says, gesturing to the other patrons in the diner and noting that many of them probably voted for Obama and then Trump.

On health care, Slotkin’s pitch is an ACA reform that includes a buy-in to Medicare, allowing the program to negotiate drug prices with pharmaceutical companies to keep prescription drug costs down. “In this part of the country,” she says, if “you can’t explain to people what you’re going to do for their pocketbooks or their kids, you don’t deserve your vote.”

While mass protests against border separations or Supreme Court Justice Brett Kavanaugh’s confirmation may be driving enthusiasm and fundraising in more liberal areas, “in the Midwest, we cannot stand the vitriol,” says Slotkin, recalling that her Democratic mother and Republican father never fought about politics. “People’s neighbors see the signs and they walk on eggshells around each other. Moms tell me they don’t want to talk to other moms when they drop their kids off at school. Thanksgiving dinner is super uncomfortable. Midwesterners can’t stand that.”

Other first-time women candidates, many of them veterans, have taken a similar approach. Amy McGrath, a former Marine fighter pilot running for Congress in Kentucky, has avoided running negative ads against her opponent, GOP Rep. Andy Barr. Mikie Sherrill, a former Navy helicopter pilot running in New Jersey, writes on her website that she “never asked if someone was a Republican or a Democrat before starting a mission.” Chrissy Houlahan, an Air Force veteran running in Pennsylvania, ran an ad in October about how “so much anger and partisanship” is “turning our country upside down,” and vowed to “heal our country” so that “together we can turn Washington right side up again.”

For Slotkin, that means reclaiming “core American values” like diversity, a free press and freedom of expression, even if it means protesting the national anthem. “My husband spent 30 years in the Army risking his life so that people have the right to kneel,” she says.

It’s a non-partisan message that seems to be resonating in her district. “She has positioned herself as more moderate than some of the Democrats that have done so well this cycle,” says David Dulio, director of the Center for Civic Engagement at Oakland University in Michigan. “She’s hitting on themes that are not always partisan.”

Slotkin hopes that the rise of female veterans committed to country over party may represent a shift in American politics. “So many veterans and service candidates are running this time on the Democratic side,” says Slotkin. “We will look back on this year and say ‘that’s the year when things started to shift, when the Democrats said, ‘No, we’re not going to accept that somehow you’re a patriot if you don’t stand up for American values.'” 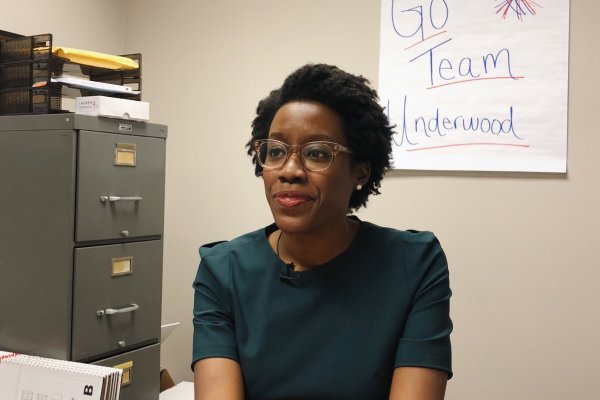 Lauren Underwood's Unlikely Congressional Bid Is All About Health Care
Next Up: Editor's Pick