Campaigns rely on young volunteers to do the legwork needed just before the election. But the candidates they are working for are often much older.

That’s not the case in Will Haskell’s campaign, which won a bid to unseat veteran Republican state Sen. Toni Boucher on Tuesday.

“I decided to run because I thought it was possible, but I did not think it was probable.” Haskell said during a phone interview with TIME after the race, “I was just absolutely stunned by the victory.”

The 22-year-old Georgetown graduate ran to unseat Republican state Sen. Toni Boucher, who has been in office for as long as Haskell has been alive. And Haskell did it by relying on an army of teen- and college-aged volunteers to knock on doors, hand out fliers and call potential supporters.

Although he’s young, Haskell is no political newcomer. He has worked for the Democratic National Committee, campaigned for Hillary Clinton in the 2016 presidential election and interned for Rep. Jim Himes and Sen. Chris Murphy.

He said he came back to his hometown after President Donald Trump’s election win and found he disagrees with many political views of Boucher, who represented his home district. He realized that no one was planning on challenging her and then decided he would run.

About one in three volunteers who worked for Haskell’s campaign were either high school students or in their early 20s, the 22-year-old campaign manager Jack Lynch said. Haskell said the young volunteers were crucial to his election win, “They were putting in the hours over the summer, making calls upon calls when most people who were old enough to vote didn’t even realize there was going to be an election in 2018,” Haskell told TIME, “They put in the work early and I think it made all the difference.”

Haskell’s campaign reflected a trend of young people getting involved in politics for this election season. According to Catalist, a voter data organization that works on the left, youth turnout rates among early voters were up 125% compared to the last midterms in 2014. Statewide, the voter registration between ages of 18 to 24 has more than doubled for the 2018 election cycle compared to four years ago, according to the Connecticut Secretary of the State office.

“A representative democracy should be representative, and it is not right now.” Haskell said during an interview recently, “Everyday, legislators in Hartford and every state capitol and in Washington as well, they make decisions that are going to impact the state, the community, the country for decades to come, and they often do so without the input of the next generation.”

Kaila Finn, a 20-year-old writer for the campaign, recalled that she saw Haskell’s campaign ad on Facebook and was moved by his message about criminal justice reform and education and equality. She said she became more involved after finding out about bills like the Times Up Act, which aims to protect people from workplace harassments and assaults, died on the Connecticut House floor.

Finn said she was also frustrated by many elected officials’ efforts to undercut bills and felt the current policies on issues like women’s rights are not progressive enough. She decided to “go full steam ahead” with the campaign for Haskell, whose policy proposals focus on areas like paid family leave, gender wage gap and workplace harassment.

Charlotte Cohen, who was in charge of photography and campaign advertisement designs, said that the activism of Parkland students empowered her as a young person who is unable to vote. She was inspired by Haskell’s speech at the March for Our Lives rally in Connecticut and later decided to volunteer for a campaign for the first time. “I am really mad that I can’t vote,” the 17-year-old said, “I think the best way I could use my power is to help other people get out and vote.”

Though many young volunteers on Haskell’s campaign could not vote in the 2018 midterms, he said, “There is no minimum age for getting involved and to be on the right side of history.” 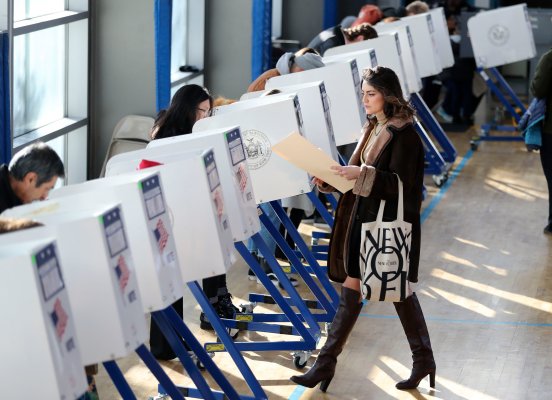 Has the U.S. Done Enough to Stop Election Meddling?
Next Up: Editor's Pick