One American Killed, Another Wounded, in Afghanistan After Fifth Insider Attack in Four Months

U.S. Army soldiers from NATO look on as the U.S. flag flies at a checkpoint during a patrol against Islamic State militants in Nangarhar Province, Afghanistan on July 7, 2018.
Wakil Kohsar—AFP/Getty Images
By W.J. Hennigan

One U.S. service member was killed Saturday and another was wounded apparently by a member of the Afghan military. The insider attack — the fifth in the past four months — occurred in the in the Afghan capital of Kabul, where U.S.-led military coalition is headquartered.

The attacker was a reportedly a member of the Afghan National Defense and Security Forces and quickly killed by other Afghan forces, according to a statement released by the coalition. The two service members were evacuated to nearby Bagram Airfield, where the wounded soldier is now in stable condition.

Neither service member has been identified, and details of the attack have yet to be released. So it’s not immediately clear if the insider attack involved a Taliban sympathizer, a personal dispute or some other misunderstanding.

The apparent shooting comes as Afghan forces, backed by NATO advisers and air power, struggle to contain the Taliban and other armed insurgents despite 17 years of continuous war. Part of the onslaught has been a disturbing trend of insider attacks that, in the past, bred intense mistrust between Afghan and NATO forces, including U.S. troops.

U.S. Army Maj. Bariki Mallya, a coalition spokesman, told TIME that it is “standard practice” for American forces to “re-evaluate and adjust our force protection measures anytime there is an insider attack.” He added: “We have not stopped operations but are constantly re-evaluating how to conduct them more safely.”

The Pentagon has roughly 15,000 troops deployed in Afghanistan, most of which train and advise Afghan forces and rarely participate in direct combat. With fewer American targets on the battlefield, the Taliban has found ways to infiltrate the various bases occupied by NATO forces through insider attacks, known within the military as “green-on-blue attacks.”

Less than two weeks ago, on Oct. 21, Czech Army Corporal Tomáš Procházka, 42, was killed when an assailant opened fire on NATO forces in western Herat Province.

Just four days later, the Taliban claimed responsibility for an attack that wounded U.S. Army Brigadier General Jeffrey Smiley, who oversees the NATO military advisory mission in southern Afghanistan. The shooting claimed the lives of General Abdul Raziq, one of Afghanistan’s most powerful security officials, along with his intelligence chief, following a meeting in Kandahar Province. The top commander of U.S. and NATO forces in Afghanistan, US Army Gen. Scott Miller, was also present but managed to escape uninjured.

U.S. Army Sergeant Major Timothy Bolyard, 42, was shot and killed Sept. 3 by an Afghan policeman after a meeting at Camp Maiwand, an installation in eastern Logar Province. The Pentagon released a service biography that showed a decorated 24-year career, which included seven deployments and six Bronze Star medals.

An Afghan assailant killed U.S. Corporal Joseph Maciel, 20, on July 7 in Tarin Kowt district located in central Uruzgan Province. Two other soldiers were also wounded in the attack. Maciel and the other troops were all members of the 1st Security Force Assistance Brigade, a specialized unit of Army advisers who are deployed to train, advise, and assist Afghan forces.

The string of insider attacks comes amid the latest report by Special Inspector General for Afghanistan Reconstruction (SIGAR), a U.S. government watchdog, which said the Afghan government controlled or influenced only 55.5% of the total 407 districts. It’s the lowest level since SIGAR began tracking the figures in 2015.

The quarterly report also stated the Afghan National Defense and Security Forces “made minimal or no progress in pressuring the Taliban” from July 1 to Sept. 30. The latest quarterly period included the Taliban’s assault on the city of Ghazni in August, when hundreds of civilians were killed in a multi-day siege that was the subject of an on-the-ground TIME story.

From 2008 to the end of 2017, Afghanistan has seen 96 insider attacks, with at least 152 foreign soldiers killed and 200 wounded, according to the Long War Journal. Three Americans, and one coalition soldier, have been killed in five attacks in 2018.

The figures, although grim, are still a far cry from the 44 insider attacks in 2012, when they accounted for 15% of all troop deaths. At the time, U.S. military commanders ordered units to designate “guardian angels” to provide security for soldiers working with Afghans.

The Pentagon withheld the names of the Americans killed and wounded Saturday pending notification of next of kin. The attack marks the eighth U.S. service member killed this year in Afghanistan. More than 2,200 U.S. military personnel have died in Afghanistan since 2001. 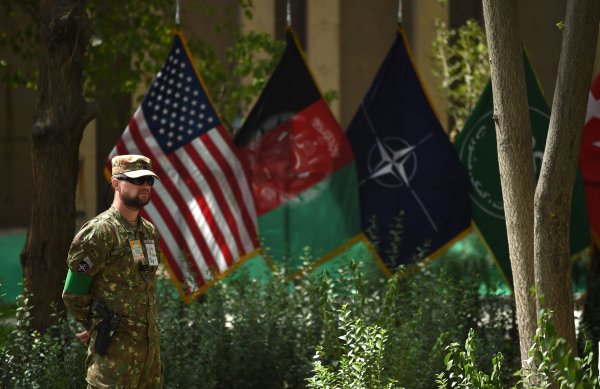 U.S. Service Member Killed in Afghanistan
Next Up: Editor's Pick