Police said a pair of Saudi-born sisters who were found dead and duct taped together alongside the Hudson River last week were previously found praying loudly at a nearby park, and expressed that they would rather commit suicide than return to Saudi Arabia.

Authorities initially believed the sisters, 16-year-old Tala Farea and 22-year-old Rotan Ferea, committed suicide by jumping from the nearby George Washington Bridge, but further investigation revealed no signs of trauma that would indicate such a plunge, New York Police Department Chief of Detectives Dermot Shea said at a Friday press conference. Their bodies were found on the Hudson River shoreline on Oct. 24.

According to Shea, an eyewitness contacted detectives and told police he was “haunted” by what he saw.

Police said an eyewitness saw who he believed to be the Ferea sisters at around 7 a.m. on Oct. 24 in Riverside Park in Manhattan. Police said that, according to the witness, the two women were sitting 30 feet apart with their heads in their hands and making loud noises described as praying. Police said they have credible sources that say the sisters expressed “they would rather commit suicide than return to Saudi Arabia.”

Shea also added that the duct tape was not binding them tightly together but “more like keeping them together.”

Authorities are still awaiting results from the medical examiner’s office to determine the cause of the sisters’ deaths, but said it is credible that the sisters entered the water alive.

“At this point in time, everything we’ve seen thus far leads to something other than a crime taking place, but were not ruling it out.” Shea said.

Shea said further investigation established that the sisters’ family had not seen the pair since they went missing on Nov. 30, 2017. After they were located by authorities in December 2017, they were placed into a Virginia facility “similar to a domestic violence center.” Police said the sisters went on to live in the Virginia facility “due to abuse allegations” until August of this year, when they went missing again. Police said the sisters’ family did not have any contact with the girls while they stayed in the facility. Police said reports of abuse by the mother, father and brother against the sisters have been brought to the attention of the NYPD, but have not been corroborated.

Shea said investigators were able to confirm through Uber records that the sisters traveled for most of August until they arrived in New York City on Sept. 1.

Authorities said that they were able to determine through credit card records that, from Sept. 1 until they were discovered on Oct. 24, the sisters stayed in high-end hotels and shopped in New York City. The sisters also ordered takeout food multiple times a day until the credit card, belonging to 22-year-old Rotan, was maxed out. Shea said police also relied on surveillance footage from up to six days before their bodies were found, which showed the sisters together alone and in good health, showing no sign of distress.

Police said the sisters were only in the U.S. for two to three years, but would not confirm if their parents lived in the U.S. or what kind of abuse claims were raised.

NYPD officials confirmed that the sisters applied for asylum in the U.S., but they did not elaborate. The sisters did, police said, reference the allegations of abuse when applying. Shea said police believe the girls were afraid of being deported while living in Virginia.

“There are still gaps to fill in,” Shea said of the investigation. “This is a tragedy all the way around, we want to get justice for the victims.”

Authorities said they are continuing their investigation in part by examining electronic evidence, and are “exploring all angles.” 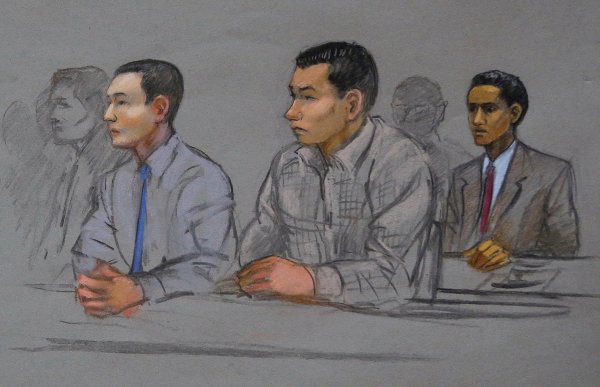 Friend Who Helped Boston Bomber Get Rid of Evidence Deported to Kazakhstan
Next Up: Editor's Pick