Journalistic Objectivity Evolved the Way It Did for a Reason

Vice President Spiro Agnew meets with members of the Massachusetts news media in the wake of a speech criticizing the news media, on March 19, 1971, in Newton, Mass.
Bettmann—Bettmann Archive
By Matthew Pressman

A lying president. Political polarization tearing the country apart. Protest movements demanding an end to sexist and racist power structures. In such a climate, can journalists be expected to report the news objectively? Should they even try?

That’s the dilemma that faced the American press in the late 1960s, and a parallel debate is playing out again today. Back then, objectivity survived — just barely — as the bedrock principle of American journalism, but this time the outcome may be different.

Although some people think objectivity is the press’ natural mode, for most of American history newspapers were proudly partisan. Not until the 1920s did objectivity catch on as a professional ideal. A wave of newspapers mergers and closings (which would continue for the rest of the century) meant each city had fewer papers, and the surviving papers had to appeal to a broader swath of the public. Overt partisanship in the news pages would alienate large parts of the target audience.

Objectivity was far from perfect, though. As practiced in the 1940s and ’50s, it turned journalists into stenographers: they simply reported what powerful people said and did, without providing context or analysis. As the famous radio commentator Elmer Davis noted in 1953, that kind of objectivity “lets the public be imposed on by the charlatan with the most brazen front.”

The charlatan Davis had in mind was Sen. Joseph McCarthy, who had a knack for dominating the news cycle with sensational, unsubstantiated attacks. Journalists considered McCarthy a dangerous demagogue and said so in opinion articles, even as copious, respectful news coverage fueled his rise. (The 2016 campaign was a replay of this phenomenon, some have argued.)

In response to McCarthy — and to TV news, which threatened to put newspapers out of business — the press changed its definition of objectivity. From the 1960s on, journalists routinely included analysis and interpretation in their reports — not “just the facts.”

This new understanding of objectivity attempted to draw a line between journalists’ professional judgments (O.K. to include in a news report) and their personal opinions (not O.K.). Then as now, most reporters were left of center in their personal views, as numerous studies conducted in the intervening years have shown, and many conservatives saw those professional judgments as simply liberal bias in disguise — particularly when the press began to question institutions that most Republicans revered: the police, the military, big business, Richard Nixon’s White House.

The idea of liberal bias in the news media became part of Republican dogma in November 1969, thanks to a pair of speeches from Nixon’s vice president, Spiro Agnew. Suggesting that members of the “elite” media “allow their biases to influence the selection and presentation of the news,” Agnew called out the major news networks, the New York Times and the Washington Post. “The time for blind acceptance of their opinions is passed,” he said, “and the time for naïve belief in their neutrality is gone.”

But even as Agnew and others attacked the news media for failing to be objective, many within the profession called for scrapping objectivity altogether. Rolling Stone’s “gonzo” journalist Hunter S. Thompson derided the phrase “objective journalism” as “a pompous contradiction in terms”; New York Times columnist and associate editor Tom Wicker called objectivity the press’s “biggest weakness,” arguing that it privileged the perspectives of the powerful and caused journalists to withhold their knowledge from readers.

Countless journalists, especially younger reporters who had been influenced by the New Left, felt the same way. “More young reporters reflect the philosophy of their age group and times—personal engagement, militancy, and radicalism,” wrote New York Times editor Abe Rosenthal to a senior colleague in 1968. He lamented that they “question or challenge the duty of the reporter, once taken for granted, to be above the battle.” Editors throughout the country expressed similar concerns. “Attack on Objectivity Increases from Within,” read a 1970 headline in the trade journal Editor & Publisher.

But these attacks on objectivity didn’t kill it.

Instead, as I discovered while researching the history of the news media, being criticized simultaneously by people with opposing ideological viewpoints convinced the people in charge of the country’s leading news organizations to stay the course — to remain committed to impartial, balanced reporting and to keep opinions out of news stories. As one Los Angeles Times editor put it, “If both sides equally think you’re doing a crappy job, maybe you’re not. Maybe you’re doing what you’re supposed to do.”

Regardless of their personal views, editors and executives at top news organizations wanted their coverage to appear centrist — after all, that was presumably the way to appeal to the broadest possible audience. So while journalists continued to debate the pros and cons of objectivity in the decades after 1970, there was little doubt that it would remain the profession’s guiding principle — that is, until recently.

First, the economic rationale for objectivity vanished. With print media declining and Facebook and Google taking the lion’s share of online ad revenue, news outlets must focus on getting paying customers — or failing that, loyal, engaged customers. That’s difficult, when people can find a seemingly endless amount of free news online, and when “negative partisanship” (the loathing of those who hold opposing political beliefs) reigns supreme. Trying to attract a mass audience with objective coverage, as newspapers did in the mid-20th century, is a fool’s errand — especially in a social-media age when provocative articles get shared more widely than studiously objective ones.

Then, along came Donald Trump. His rise has caused some journalists to question objectivity’s usefulness as a professional ideal more insistently than at any time since the 1970s. They say that the brazenness with which President Trump and his surrogates either lie or mislead people, and the challenge they present to the very notion of objective truth, call for a different approach to reporting. In their view, a commitment not to take sides leads journalists to merely parrot obfuscations and allows Trump to set the news agenda, thus “normalizing” a situation that is anything but.

Objectivity certainly has its pitfalls — and just because a news outlet has a viewpoint, that doesn’t make its coverage inferior. But those who see objectivity as a barrier to truth-telling are misunderstanding its requirements. It does not prevent journalists from making judgments about the news; it simply asks that those judgments be based on dispassionate analysis.

After studying the evolution of objectivity in American journalism, I’m rooting for it to survive. Fifty years ago, facing a similar crisis, the press adjusted but didn’t abandon its fundamental principles, and it led to what, in retrospect, was a golden age of journalism. The odds may be against it, but the same thing could happen today.

Matthew Pressman is an assistant professor of journalism at Seton Hall University and the author of On Press: The Liberal Values That Shaped the News, available now from Harvard University Press. 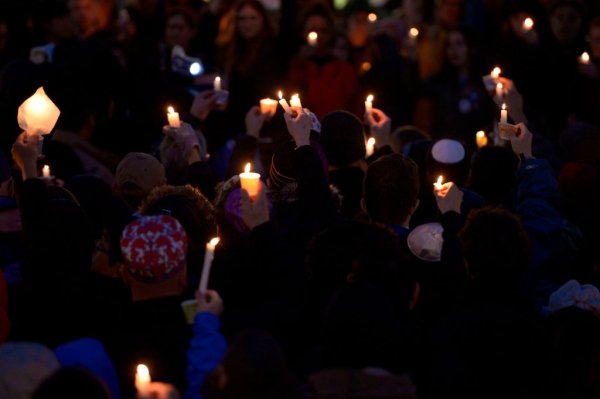 The Pittsburgh Attack Led to Calls For 'Tikkun Olam.' What to Know About the Influential Jewish Idea
Next Up: Editor's Pick