'He's a Good Dog.' Man Forgives Dog That Shot Him on Hunting Trip

Rin Tin Tin, as a Red Cross rescue dog, trains with a soldier holding a rifle, circa 1943.
The Frank S. Errigo Archive—Getty Images
By Billy Perrigo

A 74-year-old man who was shot by his dog while hunting in New Mexico says he forgives the 120-pound Rottweiler-mix named Charlie.

“He’s a good dog,” Tex Gilligan, recovering in Texas after the accidental shooting, told ABC News. “[He] did not mean to do it,” he said.

Gilligan was in the New Mexico desert hunting jackrabbits when Charlie, one of three dogs with him at the time, reportedly caught his paw on the trigger of the gun and fired a shot which hit Gilligan in the back through the driver’s seat.

He suffered three broken ribs, a punctured lung and a broken shoulder bone. “It went through my ribs my lung and busted up my collarbone on the right side,” Gilligan told ABC News. “I had a gaping hole, you know, and a lot of blood there too.”

Gilligan said at first, he thought he had been hit by a sniper from a distance, because nobody was around. It was a stroke of luck he was able to call 911, too, because he only brought a cell phone because of heavy rains. Normally, he said, he does not take one hunting.

It was only when the county sheriff investigated that it was determined Gilligan had in fact been shot by his own dog. “The gun was positioned in the truck with the barrel facing up, towards Mr. Gilligan,” law enforcement told ABC News. “The investigation is being handled as an accidental shooting.”

“I never thought that this would happen,” a good-humored Gilligan said. “It’s an interesting story: ‘a dog shot a man!’” 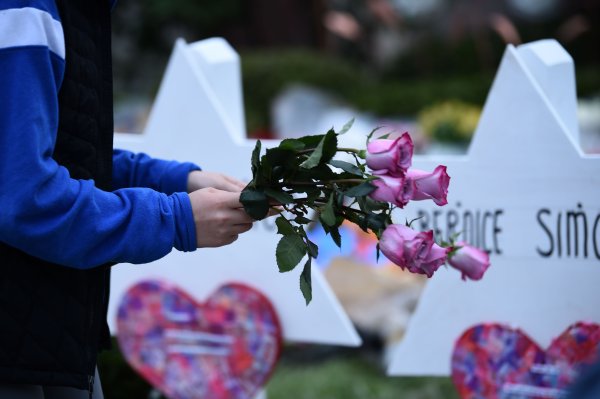 Slain Couple Who Died at Pittsburgh Synagogue Where They Married 62 Years Earlier Laid to Rest
Next Up: Editor's Pick