A Pakistan Court Overturned a Christian Woman's Death Sentence for Blasphemy. Now, Protests Are Spreading Across the Country

Pakistan was rattled by a third day of unrest Friday as hard-line Islamic protesters burned tires in city streets and chanted incendiary slogans opposing the recent acquittal of a Christian woman who spent almost a decade on death row for a blasphemy conviction.

Asia Bibi, a mother of five believed to now be in her 50s, was accused of insulting the Prophet Muhammad after a quarrel with fellow farm laborers in 2009. Muslim laborers who worked alongside her claimed she drank water from the same cup as them, in what they argued was an affront to Islam. She was sentenced to death by hanging in 2010 — becoming the first woman ever dealt capital punishment for blasphemy in the predominantly Muslim country.

On Wednesday, after years spent waiting in solitary confinement, it appeared that freedom was finally on the horizon as Pakistan’s Supreme Court overturned her conviction despite widespread fears that it would lead to unrest. In a reference to Shakespeare’s King Lear, one of the judges said Bibi was “more sinned against than sinning.” The fallout was almost immediate; right-wing Islamic political parties quickly mounted calls for an execution despite her name being cleared. Roads were blocked, cellular service interrupted and schools were shut down across the country. Bibi is expected to leave the country to seek safety, but is currently at an undisclosed detention facility awaiting release.

Read more: Imran Khan’s Victory in Pakistan Could Bring Stability. But at What Cost?

Leading opposition to the ruling is the hard-line Tehreek-e-Labbaik Pakistan party, known as the TLP, which roused its supporters to take to the streets. The party, which adheres to Sunni Barelvi beliefs, said the judges presiding over Bibi’s case were wajib-ul-qatl — liable to be killed. Party leader Khadim Rizvi castigated the newly-elected government of Prime Minister Imran Khan for traveling abroad while the country was in crisis. Khan, who is currently in China seeking to strengthen financial ties, has encouraged protestors to maintain calm and avoid escalating the protests, but negotiations between the Pakistani government and protesters dissolved bitterly late Thursday.

“This is not a normal case,” Ejaz Ashrafi, a spokesperson for the TLP, tells TIME by phone. TLP leaders have pledged to fight the verdict until the government capitulates, while another right-wing political alliance, Muttahida Majlis-e-Amal, also vowed to hold a “million man march” in the port city of Karachi next week. “The Prophet Muhammad is our respected leader, and upholding his honor and dignity is integral to our faith,” Ashrafi said. “Anyone who commits blasphemy against his name deserves death.”

Rizvi has mobilized a massive support base through social media, and his acolytes often appear on the streets chanting violent slogans such as: “The only punishment for a blasphemer is beheading.” Last year, his followers paralyzed the capital Islamabad with protests against changes to an election oath that mentioned the Prophet Muhammad. The modification was struck down in a concession to the hugely disruptive demonstrations. The party also has a growing political following, winning more than two million votes in the most recent election and scooping up two seats in parliament.

Bibi’s case has been polarizing since the start. In 2011, several prominent political figures who voiced support for her were assassinated, including Christian politician Shahbaz Bhatti and former governor Salman Taseer. The latter was murdered by a Barelvi bodyguard, Mumtaz Qadri, who was later hanged for the killing. The TLP made him into a martyr; party supporters still visit a shrine in his honor built near the capital. “They portrayed him as a hero,” says Mehwish Rani, a Pakistani political analyst, adding that while earlier Barelvi movements failed to inspire the masses, “the TLP is different.”

The controversy surrounding Bibi’s case poses an ironic challenge for the new Khan government, whose leader rose to power through the same kind of public protests now paralyzing the country albeit with less religious rhetoric. The writ of the state has seemed particularly weak to many Christians, who only enjoyed an ephemeral victory before safety concerns settled in. Some members of the Christian community were circulating emergency notices warning that Christian churches and gatherings would become likely targets, according to messages seen by TIME. Many Christians are hiding indoors and churches remain on high alert.

“This is the time for the government to show that it is committed to protecting the rights of all Pakistanis,” Rabia Mehmood, Pakistan researcher at Amnesty International, tells TIME. If Pakistani society can peacefully move past its current state of unrest, Mehmood says the Bibi verdict could have wide-ranging positive impacts for other blasphemy cases. “We hope that religious minorities will be treated equally and without discrimination, and the abusive use of the blasphemy laws stops.”

And there are certainly still cases pending before the courts. The U.S. Commission on International Religious Freedom says that around 40 Pakistanis are still facing blasphemy charges in the country, including men like Junaid Hafeez, who is accused of posting blasphemous comments on Facebook. “For blasphemy cases, the Pakistani government and state institutions must introduce reforms to the criminal justice system so that police, prosecutors and courts can work independently without fear and intimidation,” Mehmood says.

Introduced by the British in the 1800s, Pakistan’s blasphemy law criminalized action offending religious sentiments or defiling sacred spaces. The law was made even more draconian in the 1980s, during a period of Islamization under the military ruler General Zia ul-Haq, when it was broadened to impose the death penalty for insulting the Prophet Muhammad. This penalty still applies today.

Before his election, Prime Minister Imran Khan stunned many Pakistanis by defending the law, which is widely seen as a tool for settling personal scores or confiscating property from vulnerable minorities. Some Pakistanis saw Khan’s pre-election defense as an opportunistic political calculation, designed to broaden his appeal to right-wing Islamic groups and earn their votes. But in the aftermath of Bibi’s acquittal and the subsequent protests, Khan seems to have changed tack.

“Those involved in this are not doing any service to Islam,” Khan told the nation in a televised address on Wednesday, referring to those who support the repressive law. “They are, in fact, enemies of Islam.”

The original version of this story misstated the location of the Mumtaz Qadri Shrine. It is within the capital territory of Islamabad, not “near” it. 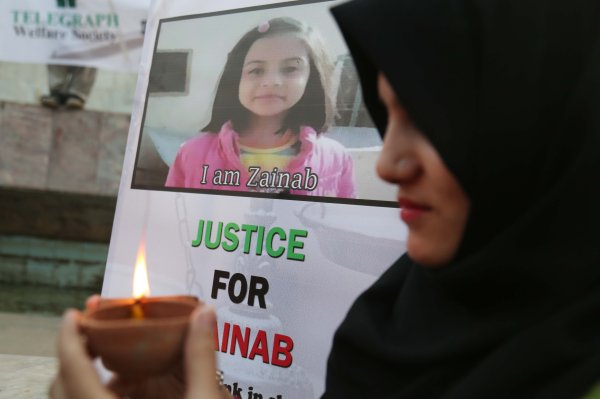