A small, uninhabited island in northern Japan may have “disappeared” after being worn away by waves, according to the country’s coast guard.

The island called Esanbehana Kita Kojima was located just 1,640 ft. from a village on the northern coast of Hokkaido before it vanished from sight, Japanese broadcaster NHK reports.

The Coast Guard reportedly went to the area to investigate following a report from local residents last month that they could no longer see the far-flung spit of land.

It wouldn’t take much for the islet to dip beneath the waves; it was only recorded at 4.6 ft. above sea level in a 1987 survey. The Coast Guard theorized that the sea and ice floes could have eroded away what was left above sea level, according to NHK.

The island’s identification was also short-lived. Esanbehana Kita Kojima is one of 158 uninhabited islands that received names from the Japanese government in 2014 in an effort to define the country’s maritime boundaries, according to the Guardian.

The island is located near the Northern Territories, a volcanic arc of islands that have been the subject of a territorial dispute since Soviet occupied them in the closing days of World War II. Russia refers to the archipelago as the Kuril Islands. In 2005, the European Parliament passed a resolution calling for the islands’ return to Japan.

Japan is also part of a contentious and long-running dispute with China over the Japanese-occupied Senkaku/Diaoyu islands in the East China Sea.

But the loss of Esanbehana Kita Kojima could have the effect of shrinking Japan’s maritime territory. The 1982 U.N. Conference of the Law of the Seas defines a country’s exclusive economic zone (EEZ) in the sea as extending up to 200 nautical miles from its shoreline. But international law only recognizes an island if it remains above sea level during high tide.

Now with the loss of one small island, Japan’s EEZ could get a few meters smaller. 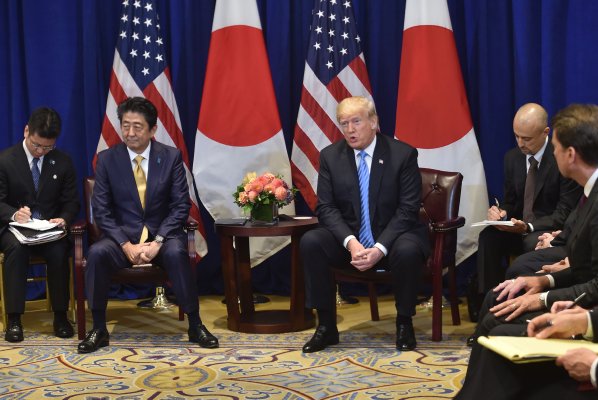 Japan's Tricky Balancing Act Between the U.S. and China
Next Up: Editor's Pick