More than 400 congressional seats, 150 statewide ballot measures and 6,000 state legislature positions will be decided during Tuesday’s 2018 midterm elections — as well as 36 gubernatorial races, some of which are close and could have implications outside of their home states.

Among some of the more attention-grabbing midterm races and ballot measures in 2018, voters in conservative Texas will decide whether to elect Democrat Rep. Beto O’Rourke or stick with President Donald Trump’s former foe Sen. Ted Cruz. Michigan and North Dakota may become the first Midwestern states to legalize recreational marijuana. Washington state could become the first to impose a carbon tax to combat climate change.

But governors’ races in the 2018 midterm elections are important. In addition to being a frequent stepping stone to the Oval Office, governors can wield power far outside of the boundaries they represent, especially when it comes to redistricting. Up to 29 of the governors elected this year will have the power to veto the maps that local legislatures draw after the 2020 Census. These maps could impact the eventual makeup of the House of Representatives and, in turn, which bills become laws.

“This may not be something people think about because it doesn’t seem like it has any connection with redistricting, and they’re probably thinking about other things,” Michael Li, senior counsel at the Brennan Center for Justice at NYU School of Law, told TIME. “But it actually could be the difference between having representative maps or maps that really make elections all but meaningless.”

Republicans currently occupy the governors’ mansions in more than 30 states. Take a closer looks at the 2018 midterms governors races in which Democrats could even the playing field:

Stacey Abrams could be elected the country’s first black female governor. Polls show a very tight race, in which Abrams is behind Georgia Secretary of State Brian Kemp by less than two percentage points. Trump carried the state by about five points in 2016.

Also of note in this midterm election governors’ race is a lawsuit Kemp faced for his office’s “exact match” method it used to verify new voter registrations. An Associated Press investigation published earlier this month found that Kemp’s office had approximately 53,000 voter registration applicants pending, nearly 70% of whom were black voters.

On Friday, a federal judge ruled that the state’s exact match rule would not apply in the midterms, allowing the people who had seen their registrations held up to cast votes.

Florida has not seen a Democratic governor in almost 20 years, but that might change on Nov. 6 when Republican Rep. Ron DeSantis and Tallahassee Mayor Andrew Gillum go head-to-head in the 2018 midterm elections.

DeSantis has faced setbacks in his quest for the governors’ seat. For example, right after the primary he said electing Gillum, a 39-year-old black man, could “monkey this up,” which some perceived as racist. A spokesman for DeSantis said the comment “had nothing to do with race or anything like that.” But it doesn’t look like Gillum fully bought it. During the pair’s final debate, Gillum said, “I’m not calling Mr. DeSantis a racist. I’m simply saying the racists believe he’s a racist.”

Trump won Florida in 2016 — by less than a two-point margin — but that didn’t stop him from endorsing DeSantis in a recent tweet.

An average of recent polls shows Gillum up by almost 3%.

Outgoing Gov. Paul LePage is term-limited and unable to be on the ballot this year, but that isn’t keeping him affecting the Republican party’s hold on the position. He’s been faulted over some racially insensitive comments, like this one: “You try to identify the enemy and the enemy right now, the overwhelming majority of people coming in, are people of color or people of Hispanic origin.” LePage managed to sign the largest tax cut in the state’s history and oversaw significant job growth, but he also compared the IRS to the Gestapo on two occasions. On another occasion, he said he wanted to tell former President Barack Obama to “go to hell.” Morning Consult reported his approval rating as 41% earlier this year.

James Melcher, a political science professor at the University of Maine at Farmington, told the Press Herald in June that LePage would have a lot do with how the race played out. “To some extent, some of this is a referendum on Paul LePage’s eight years as governor,” he said.

Maine’s Attorney General, Janet Mills, is positioning herself as a change of pace, and it’s working. One recent poll shows her ahead of Republican Shawn Moody by eight points. Clinton carried the state in 2016 by approximately 3%.

Republican Gov. Bruce Rauner is among the most unpopular governors up for re-election in the 2018 midterms, according to Morning Consult. The list indicates 60% of people in the state disapprove of him as Governor. According to a few averaged polls, Democrat J.B. Pritzker leads 43.7% to Rauner’s 28%.

Pritzker, an heir of the Hyatt Hotel fortune, is using his wealth to fund his own campaign. Earlier this month, the New York Times reported Pritzker had contributed approximately $162 million out of the $165 million in his “campaign war chest.” It’s shaping up to be one of the most expensive gubernatorial races in U.S. history.

Rauner originally ran as a business-minded conservative, but he’s faced problems for that platform from Republicans and Democrats alike. He’s alienated conservatives by signing into law a controversial measure that expanded taxpayer-subsidized abortions and has alienated Democrats for his rhetoric regarding undocumented immigrants, among other things.

Ohio Attorney General Mike DeWine, a former Republican senator, wants to replace term-limited Gov. John Kasich, a moderate Republican who challenged Trump in the 2016 GOP primary. DeWine is up against Obama-era director of the Consumer Financial Protection Bureau, Richard Cordray. It won’t be the first race in which the two face off. In 2010, DeWine narrowly defeated Cordray to become Ohio’s Attorney General.

Recent polls show that Cordray could even the score. According to four averaged ones, the Democrat is ahead by more than 4%. Trump won the state by more than 8% in 2016.

Trump won Kansas by more than 20 percentage points in 2016. In fact, the state hasn’t voted for a Democrat in a presidential election since 1964. But despite the state’s traditional conservatism, the Democratic candidate for governor is coming close to edging out current Secretary of State Kris Kobach. Democratic state Sen. Laura Kelly is behind Kobach by about 1%, according to recent polls.

As Kansas’s secretary of state, Kobach pushed through a voter ID law that substantially reduced turnout. He’s been accused of hiring white nationalists to work on his campaign and was involved in setting up an immigrant registry system under the Bush administration that focused on countries with Muslim majorities. His policies have led prominent Kansas conservatives, like former Sen. Nancy Kassebaum and former Gov. Bill Graves, to endorse the Democrat over Kobach.

“It seems to me that Kobach has developed a record that shows a focus on ways and how to accomplish his end goals that I think are not the best for Kansas,” Kassebaum said.

Trump won Iowa by almost 10% in 2016, and he followed that by appointing Gov. Terry Branstad to become the U.S. ambassador to China. In turn, Lieutenant Gov. Kim Reynolds became Iowa’s governor. During her tenure, Reynolds has appeared to appease her Republican base by signing several immigration bills and one of the country’s strictest abortion laws, but she also appears to be working across the aisle. Earlier this month, she proposed making over-the-counter birth control available to women in the state.

Fred Hubbell, well known for his philanthropy and his family’s real estate business, is running against the GOP’s financial platform, promising to fight what he calls “wasteful corporate giveaways.”

Recent polls indicate Reynolds may not hold on to her position after the midterm elections — one from the Des Moines Register shows Hubbell ahead by 2%, while another shows Reynolds ahead by 4%. Cook Political Report rates the race as a toss-up.

The Nevada governor’s race is tight. Nevada Attorney General Adam Laxalt, a Republican, leads against Democrat Steve Sisolak by a margin of less than 2%, according to averaged polls by Real Clear Politics. Clinton won the state by a similar margin in 2016.

Republican Gov. Brian Sandoval, who is term-limited, was among the most popular governors in the country, according to Morning Consult. Although Laxalt probably hopes to count on some of Sandoval’s fans to vote for him, he hasn’t been able to count on Sandoval’s endorsement himself.

Laxalt couldn’t even count on everyone in his family to back him. Instead, two of his cousins hosted a fundraiser for Laxalt’s Democratic opponent.

Trump trounced Clinton by almost 30 points in South Dakota in 2016, and departing Republican Gov. Dennis Daugaard’s approval rating was as high as 61% in August of this year. Still, Republican Rep. Kristi Noem is having a hard time pulling a significant majority in recent polls. Billie Sutton, her Democratic challenger and a former rodeo rider, is seen as a moderate Democrat by many, and that may be a convincing argument as the state’s approval rating of Trump declines.

Incumbent Republican Governor Scott Walker has national name recognition and two terms as governor under his belt, but that might not be enough to win a third term. His Democratic challenger, the state’s superintendent of public instruction, Tony Evers, is about tied with Walker in some recent polls. Cook Political Report also indicates the race is a toss-up.

In a final push, the state that Trump narrowly won in 2016 is fielding visits from Democratic superstars including Sen. Bernie Sanders, former President Barack Obama and former Vice President Joe Biden in the days leading up to the election. 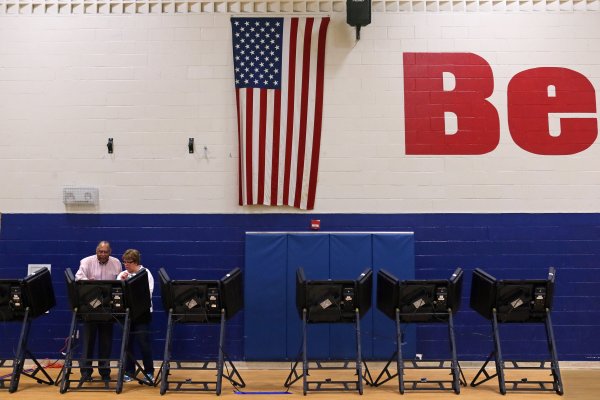 Foreign Election Influence Is Still a Huge Problem in America. Here’s How We Can Stop It.
Next Up: Editor's Pick