The New York witches who hosted a public ritual to hex Supreme Court Justice Brett Kavanaugh just two weeks ago are planning on having another hexing event ahead of the midterm elections next Tuesday.

On Saturday night, witches and observers will gather at Catland, a metaphysical boutique in Brooklyn, New York, to, as they state on their Facebook event page, put a public hex on “Brett Kavanaugh and upon all rapists and the patriarchy which emboldens, rewards and protects them.” While Catland has hosted public hexes with political bents before for President Donald Trump, their most recent hex on Brett Kavanaugh got the most attention, from both supporters and detractors.

The religious protestors the gathering attracted were so significant that the event required security. It attracted so much so controversy that one Catholic exorcist held a mass to counter the hex.

For Dakota Bracciale, however, one of the co-owners of Catland and an organizer of the event, focusing on spiritual elements of the event detracts from the overall power of the gathering.

“Is there a magical act and a religious sort of practice to it? Yes. But it operates on multiple levels,” Bracciale told TIME. “It’s also an act of socio-political resistance and solidarity in saying, ‘no, we will not accept what is going on.'”

Bracciale says that the tradition is rooted in political theater, referencing WITCH (Women’s International Terrorist Conspiracy from Hell), from the late ‘60s. “Their first action was to get in full witch regalia and go down to stock exchange and hex the stock market. So were there real witches involved? Yes. But it has a much more potent socio-political message to it, so that’s what we’ve been doing.”

Bracciale recognizes some might judge the hex, and wants you to consider that the event was organized as a way for people to mobilize in response to the political climate. But most of all, the organizer hopes that the event will be a “catalyst for people to feel emboldened and tap into their rage and their anger about what’s going on and to be able to do something about it.”

The hex is strategically timed with midterm elections happening next Tuesday.

“This is right in line with registering to vote, going out and voting on November 6, fighting against voter suppression and trying to undo all the harm that these people have tried to do,” Bracciale said.

“We want to make sure we have a big hex before midterms and to give more people the opportunity to be involved. We really have to do something to make sure that our voice is being heard. The history of witchcraft is that it’s always been practiced by the most downtrodden and the most harmed and the most at risk, disenfranchised people in society because they have no other form of recourse,” Bracciale said.

Half of the proceeds from the tickets to the event will be donated the Southern Poverty Law Center and the Sylvia Rivera Law Project. 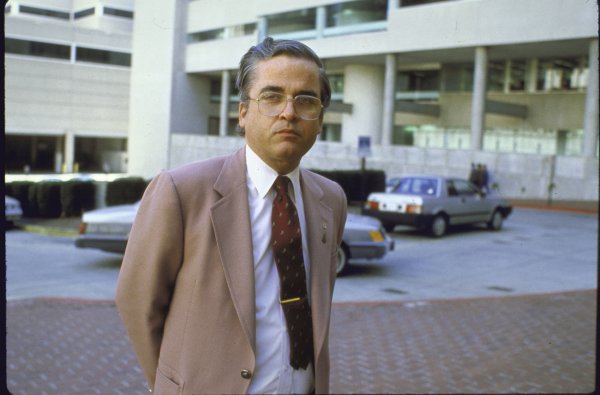 Government Leaks to the Press Are Crucial to Our Democracy. So Why Are We Suddenly Punishing Them So Harshly?
Next Up: Editor's Pick